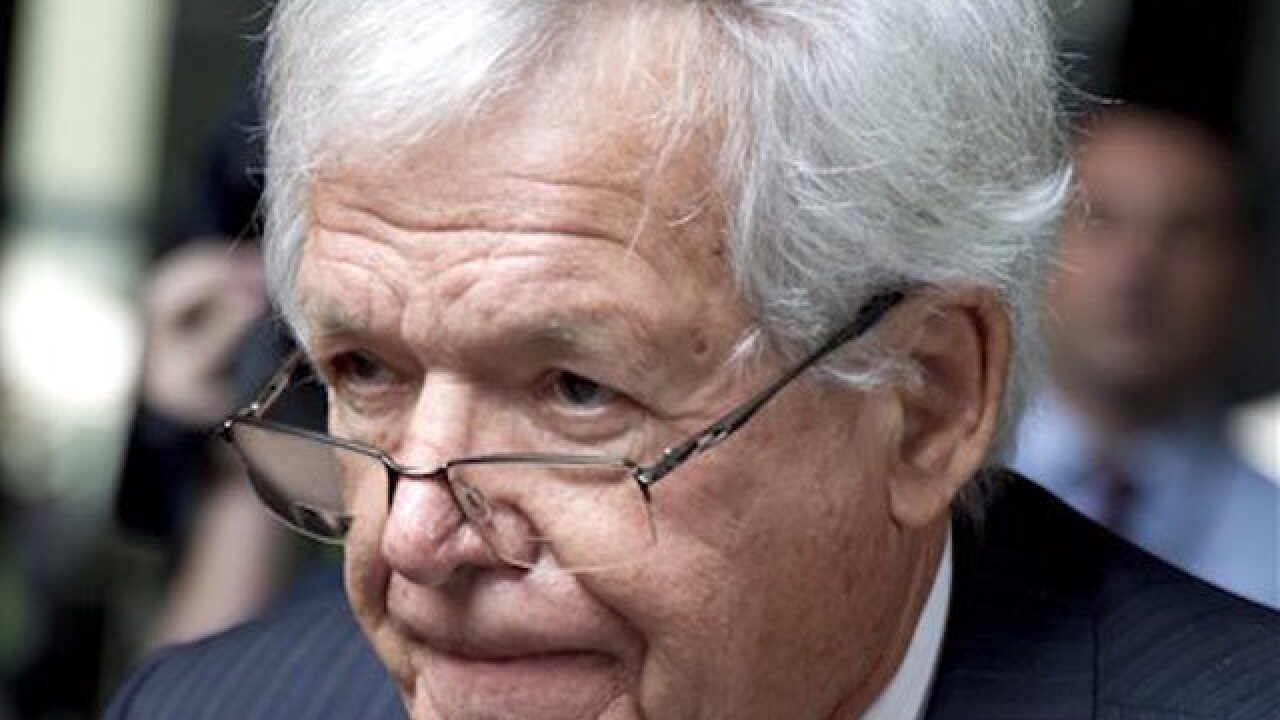 Christian K. Lee
<p>FILE - In this June 9, 2015 file photo, former House Speaker Dennis Hastert departs the federal courthouse in Chicago. The lawyer for Dennis Hastert says the former U.S. House Speaker had a stroke during the first week of November and has been hospitalized since then. Attorney Tom Green said in a statement reported by Politico that Hastert had a stroke, has been treated for sepsis and had two back surgeries while in the hospital. The 73-year-old Hastert pleaded guilty Oct. 28 to a felony count of evading bank reporting laws in a hush-money scheme. (AP Photo/Christian K. Lee, File)</p>

CHICAGO (AP) — Former U.S. House Speaker Dennis Hastert, awaiting sentencing in a hush-money case, had a stroke during the first week of November and has been hospitalized since then, his attorney said Thursday in a statement.

Attorney Tom Green said in a statement that Hastert had a stroke, has been treated for sepsis and had two back surgeries while in the hospital.

"We are very hopeful that Mr. Hastert will be released from the hospital in the early part of the new year," Green said. "The family very much desires that during Mr. Hastert's continued hospitalization his privacy will be respected."

Hastert was accused in May of evading banking regulations as part of a plan to pay hush money to conceal his "prior misconduct." Anonymous sources told The Associated Press and other media outlets that Hastert wanted to hide claims that he sexually molested someone decades earlier.

The 73-year-old pleaded guilty Oct. 28 to a felony count of evading bank reporting laws in a hush-money scheme. In the written plea agreement, the Illinois Republican directly acknowledged for the first time that he sought to pay someone $3.5 million to hide misconduct by Hastert against that person dating back several decades — about the time the longtime GOP leader was a high school wrestling coach.

In all, Hastert allegedly paid more than $1.7 million to the person, sometimes in lump sums of $100,000 cash. The indictment said the payments stopped after FBI agents first questioned Hastert in December 2014.

The Illinois Republican's sentencing date is Feb. 29. Prosecutors recommended that he serve no more than six months in prison.

Hastert, who was speaker from 1999 to 2007, was a little-known Illinois lawmaker whose reputation for congeniality helped him ascend the ranks of Congress to become the longest-serving Republican speaker in U.S. history. In January 1999, House Republicans voted for him to succeed Newt Gingrich, who had lost support because of ethics violations and the party's poor showing in the 1998 midterm election.