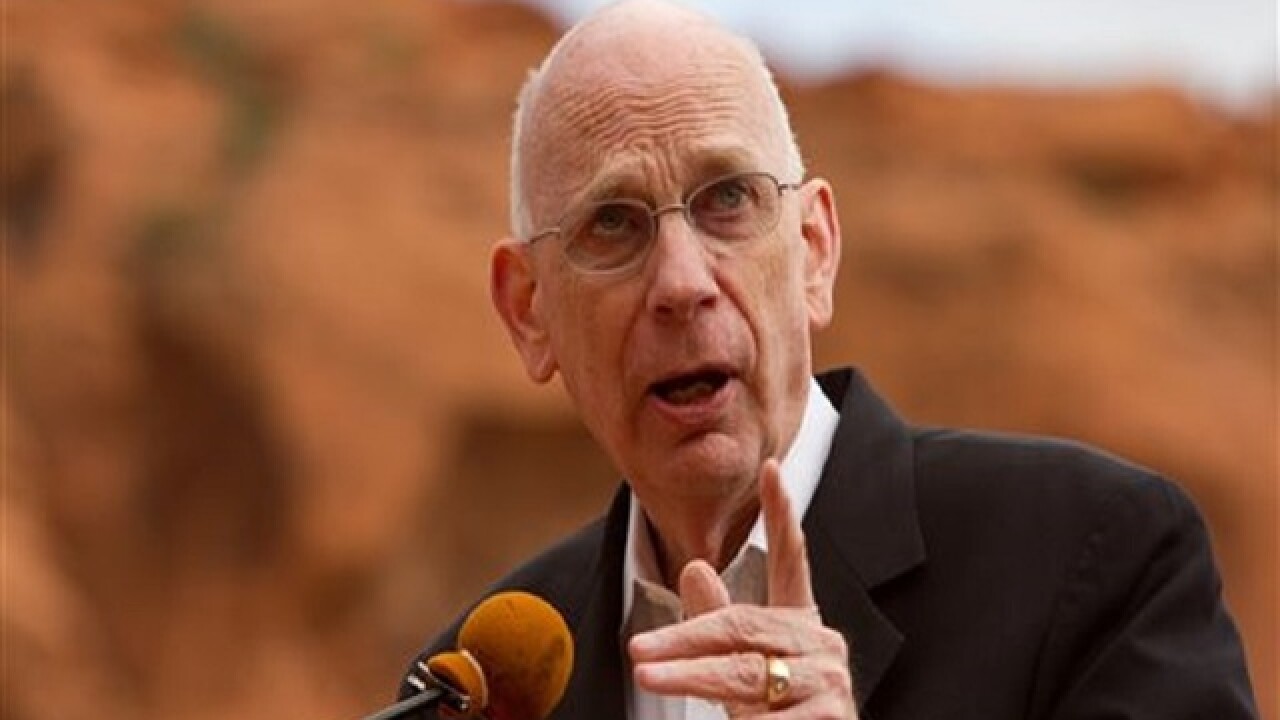 SALT LAKE CITY (AP) — Former U.S. Sen. Bob Bennett, of Utah, who shied away from the spotlight but earned a reputation as someone who knew how to get things done in Washington, has died. He was 82.
Bennett assistant Tara Tanner said he died Wednesday from complications of pancreatic cancer and a recent stroke.
The Republican was first elected in 1992 and was widely seen at home as politically moderate, which at times put him at odds with Utah's highly conservative Republican base. His middle-of-the-road reputation led to his ouster in 2010 at the state convention by delegates fueled by tea party anger.
Bennett had a stroke on April 11 that paralyzed the left side of his body and left him unable to stand or swallow. He told the Deseret News a week later the cancer had been diagnosed within a year earlier. It started in his pancreas but had spread to his stomach and near his liver. Bennett said he was receiving hospice care at his home in Arlington, Virginia.
Bennett was criticized by opponents within his own party for being in office too long after promising to only serve two terms, for supporting a bailout for distressed banks, and for working with Democrats on his own health care bill to require Americans to buy health insurance.
In the run-up to the 2010 election, Bennett took on a decidedly more conservative tone. But he failed to sway the 3,500 Republican state delegates, a generally more conservative group that selected the party's candidate in a caucus system.
Following his loss, Bennett ran a consulting firm and worked as a lobbyist in Washington.
He also became a resident scholar with the University of Utah's Hinckley Institute of Politics and penned regular opinion columns for Salt Lake City newspapers.
The former senator also became a vocal critic of the conservative wing of the party. He repeatedly said it was pushing the party away from mainstream Americans in favor of ultra-conservatives in the model of Barry Goldwater, the Republican nominee in 1964 who was soundly defeated in the presidential election.
Tributes from public figures came in Wednesday night.
Former Massachusetts Gov. Mitt Romney said in a statement that Bennett was a friend and counselor. When Romney moved to Utah to run the 2002 Winter Olympics, he said, Bennett helped him navigate government agencies and committees toward successful.
"His keen mind made him a leading figure in the Senate on issues as disparate and far-reaching as emerging technologies and federal budgets. He was respected by men and women on both sides of the aisle, not only for his expertise but also for his common touch, his common sense, and his commitment to uncommon virtues," Romney's statement said.
Bennett stayed on top of emerging technologies and in 2001 became one of the first members of Congress to purchase a hybrid vehicle. In 2006, he advocated for tax breaks for fuel-efficient vehicles.
Bennett's interest in technology began in the late 1970s. He served as chairman of American Computers Corp. from 1979 to 1981 and president of Microsonics Corp. from 1981 to 1984.
During his 18 years in the Senate, Bennett served on the Senate Appropriation Committee and leveraged that position to direct as much money as possible to Utah. Bennett frequently dismissed critics of congressional earmarks, saying the money was going to be spent anyway and Utah deserved its fair share.
He would ask those who questioned him, "Would you rather have that money go to Los Angeles?"
While Bennett proudly touted every earmark he secured for the state, he said he was most proud of a bill he sponsored in 2008 that helped designate how public lands in southern Utah would be managed. It was a thorny issue that environmentalists, developers and federal agencies fought over for years, although it received little public attention.
Bennett came from a line of prominent Utahans. His grandfather, Heber J. Grant, was the president of The Church of Jesus Christ of Latter-day Saints, and his father, Wallace Bennett, served four terms in the Senate.
The political bug caught Bob Bennett early on. His first elected office was that of student body president at the University of Utah in Salt Lake City.
Bennett is survived by his wife, Joyce, six children and 20 grandchildren.
Associated Press 2016