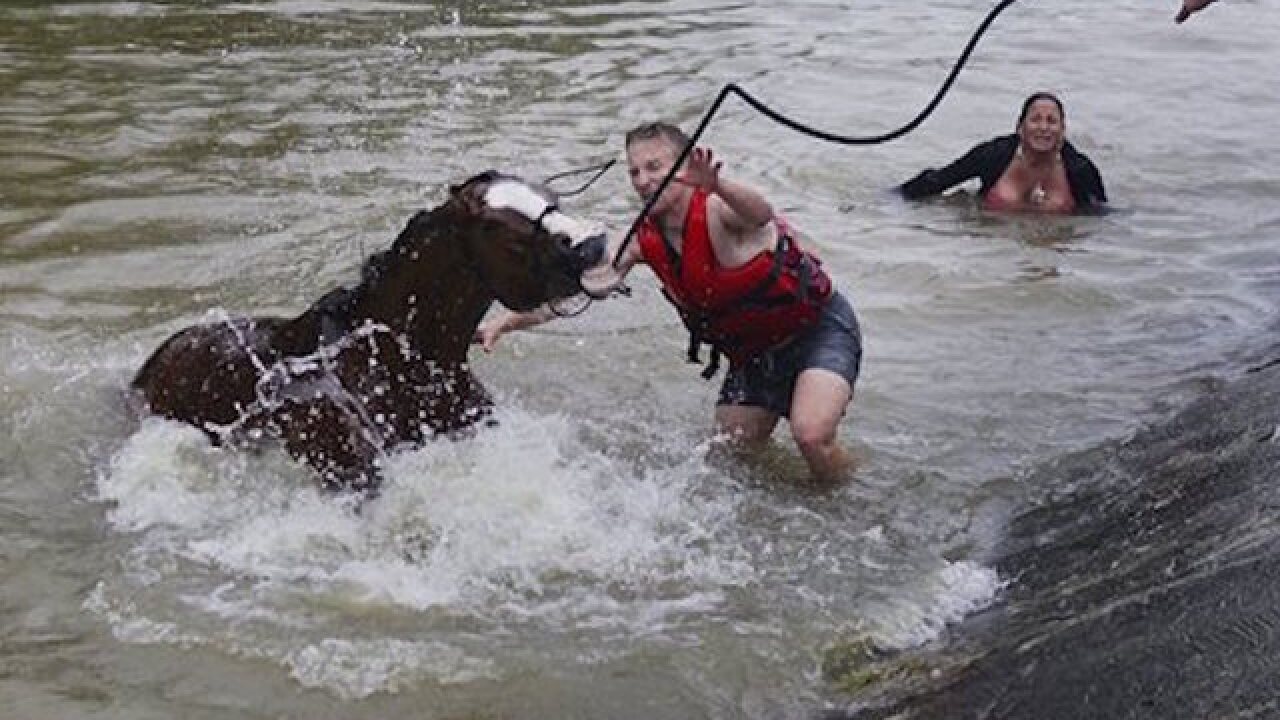 Mark Mulligan
<p>Justin Nelzen, in red vest, joins other local residents as they work to rescue up to 70 horses along Cypresswood Drive near Humble along Cypress Creek, Monday, April 18, 2016, in Houston, after a Houston-area stable was inundated by floodwaters. More than a foot of rain fell Monday in parts of Houston, submerging scores of subdivisions and several major interstate highways, forcing the closure of schools and knocking out power to thousands of residents who were urged to shelter in place. (Mark Mulligan/Houston Chronicle via AP)</p>

HOUSTON (AP) — As more than a foot of rain deluged the nation's fourth-largest city, inundating homes, shutting down major highways and leaving at least five people dead, Houston's mayor said there was no immediate solution.

Heavy flooding has become nearly an annual rite of passage in the practically sea-level city, where experts have long warned of the potential for catastrophe.

"I regret anyone whose home is flooded again," said Sylvester Turner, the city's mayor, on Monday. "There's nothing I can say that's going to ease your frustration. We certainly can't control the weather."

"A lot of rain coming in a very short period of time, there's nothing you can do," he added.

Flash flooding and a 50 percent chance of more were possible Tuesday, a day after some areas saw water levels approaching 20 inches. The National Weather Service had the area under a flash flood watch through Wednesday morning.

Scores of subdivisions were flooded and most schools remained closed although the city itself was returning to normal. Municipal offices reopened Tuesday and by midmorning, less than 10,000 CenterPoint Energy customers were without power, an improvement from 24 hours earlier when electricity outages topped 100,000. Houston's Metropolitan Transit Authority resumed service and most highways within the city were open.

Outside the city and into the suburbs of northwest Harris County, runoff from Monday's rains forced creeks over their banks and forced more people to evacuate their homes overnight.

"It's going to have to trickle its way through the city of Houston and to Galveston Bay," Francisco Sanchez, a county spokesman said.

In addition to its location, Houston's "gumbo" soft soil, fast-growing population and building boom that has turned empty pastures into housing developments all over the city's suburbs and exurbs make it vulnerable to high waters.

Harris County has seen a 30 percent jump in population since 2000. Its surrounding counties have almost grown more than 10 percent since 2000, according to the Greater Houston Partnership, a business group.

Some of the resulting developments include adequate greenspace for water runoff, but not all of them do, said Philip Bedient, an engineering professor at Rice University.

"Could we have engineered our way out of this?" Bedient said. "Only if we started talking about alterations 35 or 40 years ago."

Samuel Brody, director of the Environmental Planning & Sustainability Research Unit at Texas A&M University, last year called Houston "the No. 1 city in America to be injured and die in a flood."

Rainstorms last year over Memorial Day weekend caused major flooding that required authorities to rescue 20 people, most of them drivers, from high water. Drivers abandoned at least 2,500 vehicles, and more than 1,000 homes were damaged in the rain.

The year before, flash flooding in Houston and suburban counties left cars trapped on major highways.

Those storms still pale in comparison to the devastation wreaked by Hurricane Ike in 2008 and Tropical Storm Allison in 2001. Allison left behind $5 billion in damages and flooded parts of downtown and the Texas Medical Center, which sits near the Brays Bayou, a key watershed.

Bedient has worked with the Texas Medical Center on better preparing its facilities for massive rainfall, including the use of a sophisticated weather alert system that gives the medical center extra time to activate gates and doors that block excess rainwater.

Improving the monitoring of specific watersheds and flood-prone areas might give affected residents the extra bit of time they need to save lives and take protective measures.

"We can't solve this flood problem in Houston," Bedient said. "All we can do is a better job warning."