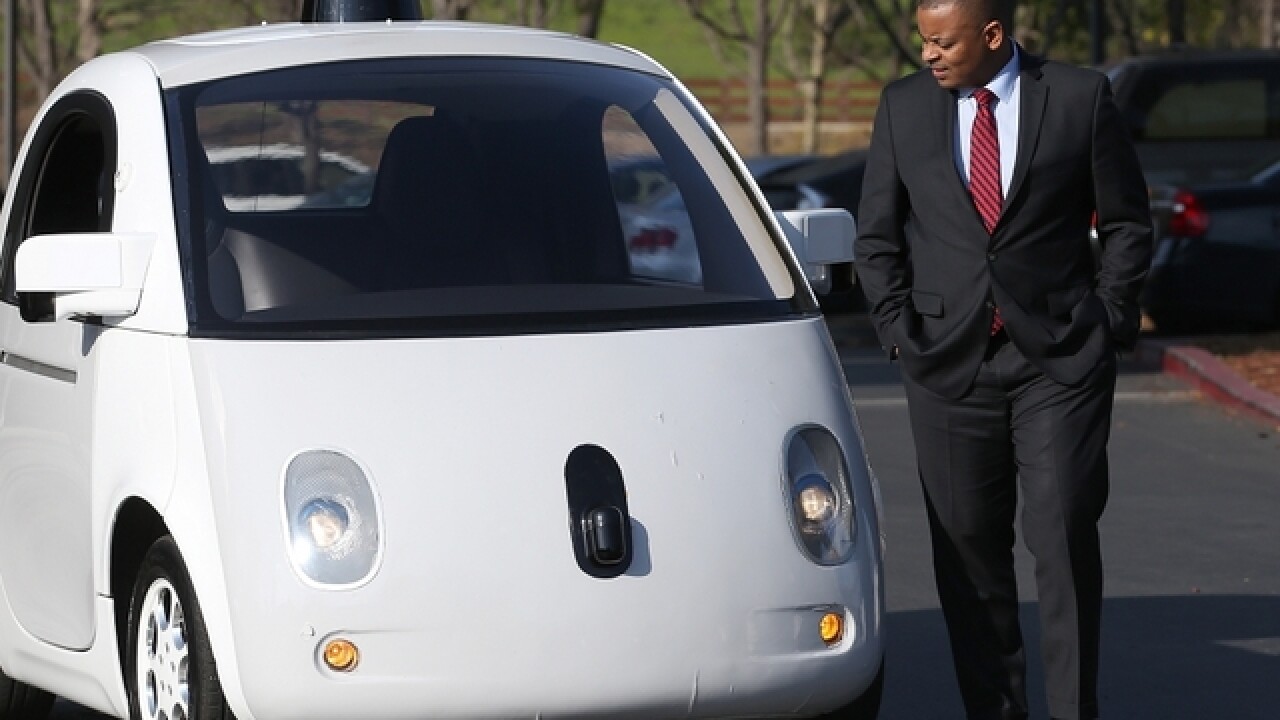 LOS ANGELES (AP) — California regulators have unveiled a roadmap that would let consumers begin using self-driving cars, though manufacturers would have to prove the emerging technology is safe before a licensed driver could get chauffeured around town.

The approach California's Department of Motor Vehicles offered Wednesday in precedent-setting draft regulations is cautious, though it does allow that Californians could be behind the wheel of a self-driving car by 2017.

Among other safety-related requirements, the cars must have a steering wheel, and a licensed driver must be ready to take over if the machine fails.

Google, which is pushing to get cars without a steering wheel or pedals to consumers, expressed "grave disappointment" with the rules, which the tech giant said would slow deployment of technology with huge life-saving potential.

Though no manufacturer has said it thinks the cars are ready just yet, at least a dozen are developing the technology. Google has suggested a model could be ready for limited use sooner than the public expects. In September, the safety chief of its self-driving car project, Ron Medford, said the technology is "close to working pretty damn well."

California's go-slow approach could benefit Texas, which this summer emerged as a competitor in the deployment of self-driving cars when officials in the capital city of Austin welcomed Google prototypes for company-sponsored testing.

"Given the potential risks associated with deployment of such a new technology, DMV believes that manufacturers need to obtain more experience in testing driverless vehicles on public roads prior to making this technology available to the general public," the agency said in a written summary of its draft regulations.

Those draft rules set out how the DMV wants to move beyond the current small-scale testing of prototypes on public roads. The DMV can change the rules over the coming months before they are finalized, and the industry is sure to lobby for significant changes.

There are no comprehensive federal rules addressing the technology, and as the largest auto market in the U.S., rules in California are a landmark in the development of self-driving technology.

Under California's framework, manufacturers would receive a permit for three years, during which time consumers could lease the cars but manufacturers would be required to keep tabs on how safely they are driving and report that performance to the state.

Before the DMV grants that three-year permit, an independent certifier would need to verify a manufacturer's safety assurances. Google and traditional automakers advocated for manufacturer self-certification of safety, the standard for other cars.

Drivers would need special, manufacturer-provided training, then get a special certification on their licenses. If a car breaks the law, the driver would be responsible.

Though the timeline for public access is squishy, in principle the DMV could finalize the rules and a manufacturer could satisfy the safety requirements as early as 2017.

That said, the draft rules surely will postpone the technology's rollout in California.

"This points to a very long slog ahead for not just Google, but really other automakers as well," said Bryant Walker Smith, a law professor at the University of South Carolina who studies self-driving car regulation. He added: "California's proposed rules are fantastic news for Texas."

Austin's mayoral spokesman Jason Stanford said his city's government already believes self-driving cars are "legal and safe" and is "thrilled to host innovative ideas like this."

California's DMV has said it wanted regulations to protect public safety, but not be so onerous that they would stifle development of a technology that could prove safer than human drivers.

After all, cars that can safely drive themselves under all conditions wouldn't rely on drivers who may be drowsy, distracted, buzzed — or unable to drive because of their age or a disability. Boosters say the technology could prevent many of the more than 32,000 deaths on U.S. roads each year.

The cars use a suite of sensors — including radar, lasers and cameras — and onboard computers to drive.

Eleven companies already have permission to test on California's public roads, with Ford the latest addition. There have been scattered collisions, nearly all involving Google cars. Those collisions have been minor, and the tech giants says each has been caused by drivers of other cars.

"Safety is our highest priority and primary motivator as we do this," he said in a written statement.

The DMV "did exactly what they should do, which is put the public safety first — and then take steps that promote the technology in a safe way," said John Simpson, privacy project director at Consumer Watchdog and frequent Google critic.