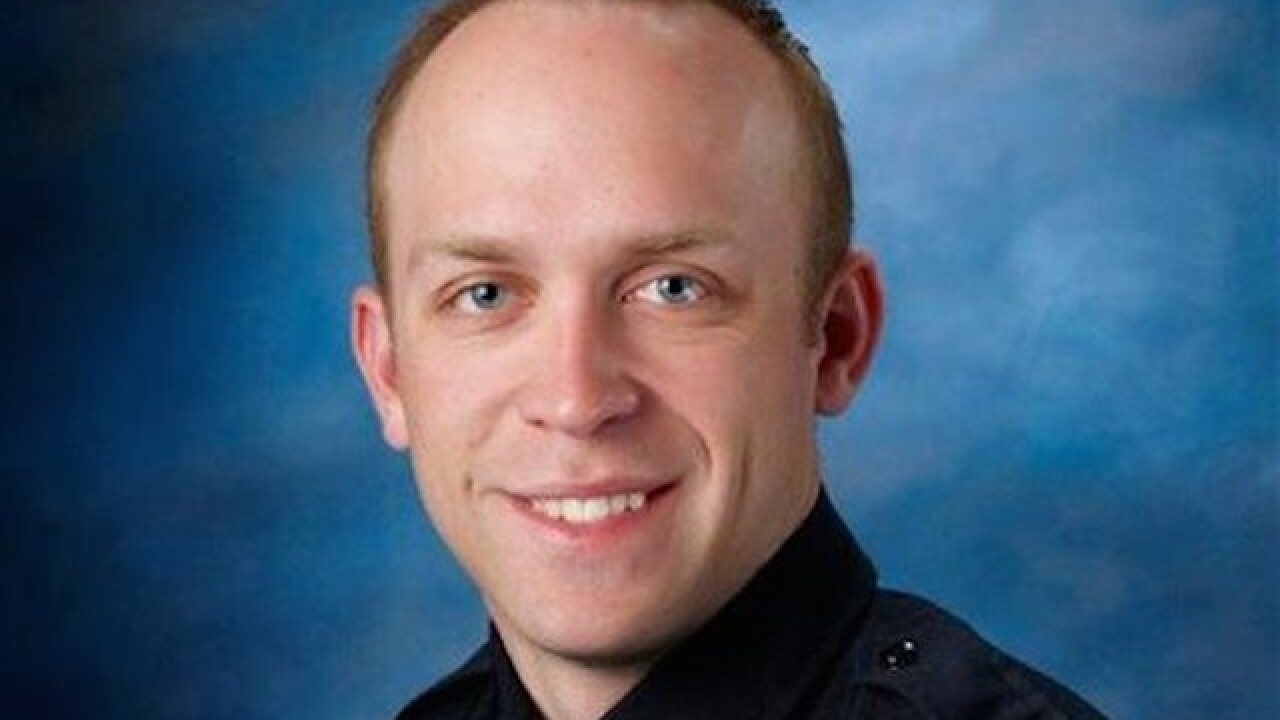 FARGO, N.D. (AP) — A North Dakota police officer died Thursday after being hit by a gunshot that authorities suspect was fired by a man later found dead in the home where the officer had responded to a domestic disturbance call.

Officer Jason Moszer, a six-year police veteran with a wife and two children, died at 12:45 p.m. from a single gunshot wound, a police spokesman said. Family members visited him in a hospital earlier in the day to say goodbye, Fargo Police Chief David Todd said.

The shooting began on Wednesday evening when the suspect, identified by police as Marcus Schumacher, fired at officers responding to the domestic disturbance call. A standoff ensued overnight and when the firing stopped, police discovered Schumacher dead inside the home. It wasn't immediately clear whether he killed himself or died from police gunfire, they said.

The violence shook Fargo, which is North Dakota's largest city but has a low crime rate. Police said an officer had not died in the line of duty in more than a century. The only other Fargo police officer killed in the line of duty was Frederick Alderman, 25, who was shot to death July 5, 1882, according to the Officer Down Memorial Page, a national nonprofit group that keeps records of fallen officers.

Schumacher, 49, was found dead shortly before dawn inside the home where he had barricaded himself, Todd said.

Schumacher appeared to have died from a gunshot wound but "we don't know if that was from us engaging him or something self-inflicted," Todd said. Todd said earlier that Schumacher had exchanged gunfire with a SWAT officer.

Cass County Sheriff Paul Laney said the suspect fired "a number of rounds" and that officers were going house to house in a six-block area "to find out where they all went."

Todd said a squad car at the scene had been fired upon and that he believes the suspect was targeting law enforcement. Police said no one else in the neighborhood was hurt.

Moszer, 33, was among officers who responded to the home Wednesday evening. A SWAT team in an armored vehicle retrieved Moszer and took him to a medical facility, where he died.

Police said they tried to communicate with Schumacher through negotiators, but that he didn't respond and the SWAT team eventually entered the house and found the body.

Officers responded after Schumacher's son called dispatchers and said the suspect had fired a gun at his mother, Schumacher's wife. The caller and his mother were able to escape the home unharmed.

Sarah Stensland, 26, lives less than a block from the suspect's home. She said she and her girlfriend locked the doors, turned off the lights and hunkered down in the basement for the night.

"We were scared. We could hear gunshots very clearly, even from the basement," she said. "I felt like my nerves were on edge all night. I'm just exhausted."

Students and staff at nearby Horace Mann Elementary School were shifted to another school Thursday so as not to impede the investigation, Fargo Public Schools said in a statement. The move was made at the request of the state Bureau of Criminal Investigation, which is handling the case.