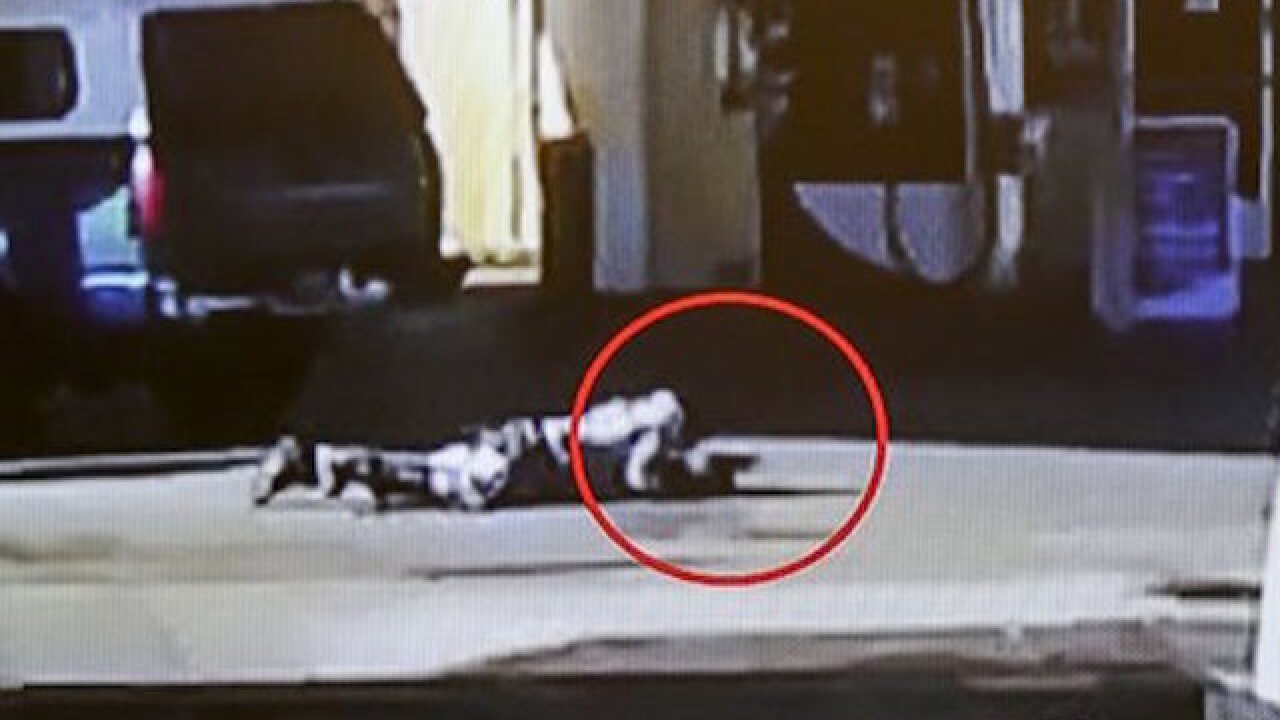 <p>CORRECTS SOURCE AND BYLINE TO LOS ANGELES COUNTY SHERIFF - In this image made from security video footage provided by the Los Angeles County Sheriff, Nicholas Robertson is stretched out on the ground with a gun in his hand after he was shot by Los Angeles deputies, Saturday, Dec. 12, 2015 in Lynwood, Calif. He died at the scene Saturday morning. Authorities released the video Sunday in response to questions about why they continued to fire on the man after he fell to the pavement. (Los Angeles County Sheriff via AP)</p>

LYNWOOD, Calif. (AP) — When deputies confronted a man carrying a handgun in a Los Angeles suburb, the fatal shooting that unfolded was notably different from other recent flashpoints in the debate over police use of force: The suspect was armed and in an area crowded with people.

Friends and relatives of Nicholas Robertson quickly questioned the police tactics that led to his death, particularly why officers fired at a person who was apparently moving away from them and why they kept firing even after he crumpled to the ground.

But law-enforcement professionals said Monday that the shooting did not immediately appear to share much, if anything, in common with other police shootings that have resulted in criminal charges against officers.

Robertson was killed by officers Saturday after witnesses reported seeing a man firing a handgun into the air six or seven times and briefly going inside a car wash and a pizza parlor.

Video of the shooting, released by the sheriff's department the next day, showed deputies firing at Robertson more than 30 times. A close-up image showed him stretched out on the pavement holding a gun.

Deputies first spotted him in front of a gas station in the south Los Angeles County suburb of Lynwood, where two women and three children were inside a car. They ordered him to drop the weapon, authorities said.

Robertson refused and at one point pointed the gun in the deputies' direction, according to police.

Jim Bueermann, president of the Washington, D.C.-based nonprofit Police Foundation, which is dedicated to better policing, said the shooting is "as different as night and day" when compared with other recent killings, such as the slaying of Walter Scott, an unarmed South Carolina man who was shot in the back last spring as he ran away from an officer.

"This guy has a gun. He's been firing it. He refuses deputies' orders to drop the gun. I think people might see some similarities, but there are distinct factual differences that people have to consider in terms of public safety."

Bueermann, who was also a longtime police chief of the Redlands Police Department, near San Bernardino, said the fact that Robertson was in a busy commercial area also heightened the risk.

"You cannot let someone armed and firing a weapon" approach a mother with kids shopping or some guy walking along and minding his own business, he said.

The police, he added, "have an obligation to people in that area to protect them."

Ken Cooper, a New York-based use-of-force expert who trains police and has testified for and against officers, called the shooting "absolutely justifiable."

Even when Robertson is crawling away, "he's still an active threat. You can be shot to where you're about to die and still be a deadly threat."

The police "want to stop that man from doing what he's doing and he's not stopping. He's very intent. What was in his head I guess we'll never know."

When Robertson collapsed, "his arms were underneath him, and the gun was still in his hand. There was never a time when the weapon was not in his possession," homicide Capt. Steven Katz said Sunday.

The suspect's gun was not loaded, but detectives found two live rounds "in his grasp," Katz said. The gun was not registered to Robertson and has not been reported stolen.

Robertson's wife told the Los Angeles Times that her mother-in-law called her shortly before the shooting to say Robertson was under the influence of alcohol. Authorities were looking into whether he had been involved in a domestic dispute.

Robertson's mother and aunt said he had no history of mental illness, and that they don't know how he would have obtained a gun.

His aunt there was no need to shoot him that many times if he was on the ground, crawling away.

"He was still back turned, walking away. Then the gunshots rang out. Then he was crawling away. So you can't tell me you felt like you were in danger," said Cassandra Howard, who also lives next door to where Robertson lived with his children and grandparents.

The 28-year-old had convictions for driving under the influence, misdemeanor assault and trespassing. Last week, he was sentenced to 22 days in jail and three years' probation for driving with a suspended or revoked license.

He was booked into jail Wednesday and released less than two hours later — standard procedure in cases involving minor charges. He was dead two days later.

On the day he was killed, Robertson seemed to be excited to attend his older brother's wedding in Long Beach, relatives said.

Robertson, a stay-at-home father of three, was black. Both deputies are Hispanic, a sheriff's spokesman said.

One officer had been working in the field for about a year and the other for about 18 months.

Bueermann said the experience of deputies is rarely a factor. He said he's seen longtime officers make bad choices and rookies who use good judgment.

Robertson's aunt said the family believes the shooting was entirely about race, and she wants the officers involved removed from the force.

"He was a good father and son. He took care of his children," Howard said. "This shouldn't have happened to him. Just like it shouldn't happen to all the others that we see across the United States."