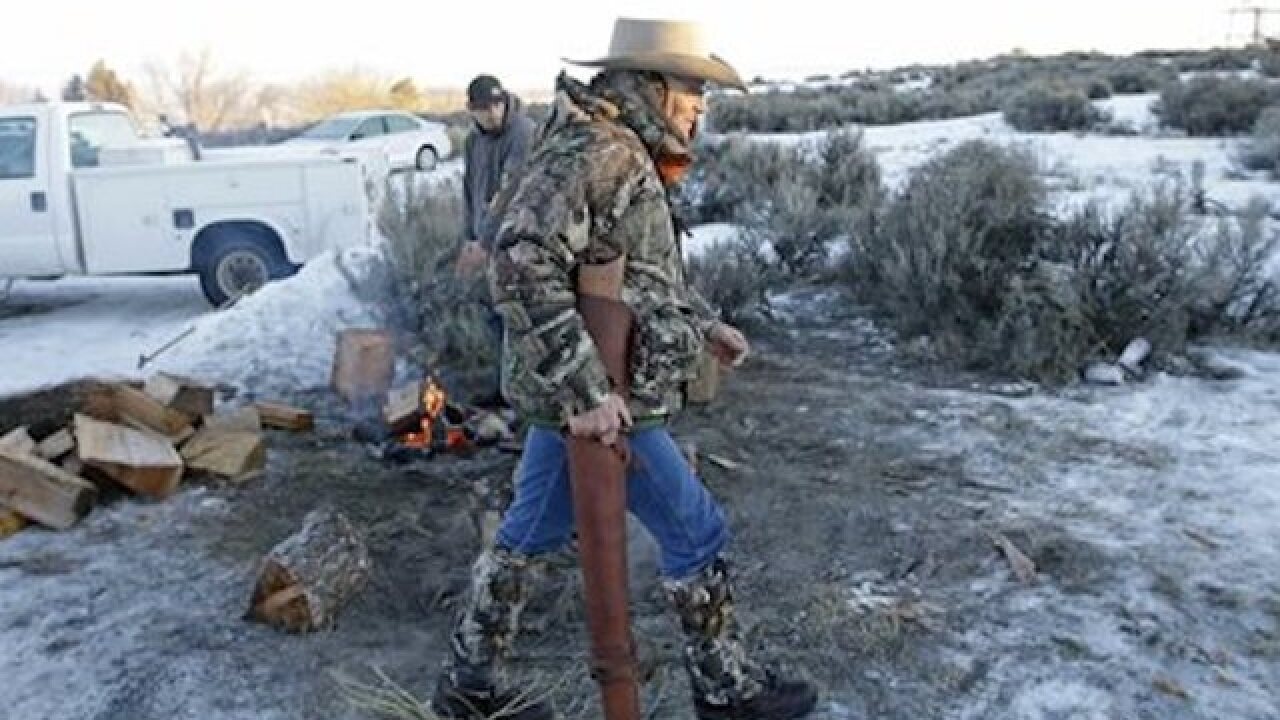 PORTLAND, Ore. (AP) — FBI agents who were at the scene of the shooting death of a key figure of the occupation of an Oregon national wildlife refuge are under federal investigation for not disclosing they fired two shots that missed Robert "LaVoy" Finicum.

Oregon law enforcement officials said Tuesday that two Oregon state troopers were justified in shooting Finicum on Jan. 26 because he failed to heed their commands to surrender and repeatedly reached for his weapon.

Finicum was struck by three rounds fired by state troopers after he got out of his truck. The troopers also shot three rounds into Finicum's truck as it was barreling towards them, officials said.

But officials also said that FBI agents who were on the scene failed to say that as Finicum was getting out of his truck, they themselves fired two rounds, neither of which hit him. One of those rounds hit the roof of Finicum's truck.

The U.S. Justice Department's Office of Inspector General said it is investigating the FBI team's actions, working with Oregon officials.

Finicum was a high-profile figure in the weekslong standoff at Malheur National Wildlife Refuge, launched Jan. 2 by a small armed group demanding the government relinquish control of public lands and objecting to the prison sentences of two local ranchers convicted of setting fires.

His death became a symbol for those decrying federal oversight, on public lands in the West and elsewhere, and led to protests of what they called an unnecessary use of force.

The FBI had said earlier that Finicum's shooting was justified because he was going for a gun.

On Tuesday, Oregon law authorities who were asked to conduct an independent investigation backed up that assertion.

During a news conference in Bend, Oregon officials played videos showing Finicum and others in his truck Jan. 26 during the initial stop by law enforcement. Finicum was driving one of two vehicles that were pulled over while carrying key occupation figures.

Video taken from the phone of one of his passengers shows the occupants panicking after authorities stopped the truck and ordered them to surrender.

With his window rolled down, Finicum yelled that he and the others were on the way to a meeting with the sheriff of Grant County. That sheriff is under investigation by Oregon authorities for contacts he had with the occupation leaders.

Finicum repeatedly yelled at the officers to either let them continue on their way to the meeting or shoot him.

"Back down or kill me now," he shouted.

After a conversation with others in the truck, Finicum says "I'm going to keep going" and they speed off, leading authorities on a short chase.

Finicum was driving over 70 mph when the truck came to a roadblock, said Deschutes County Sheriff Shane Nelson.

A trooper fired three shots at the truck as it approached because it was a threat to law enforcement, he said. The truck plowed into a snowbank. Finicum got out, and someone from the FBI team fired two more shots, Nelson said.

As Finicum stood in the snow, authorities told him multiple times to lie on the ground and surrender. Finicum yelled "you're going to have to shoot me" while reaching into his jacket three times. Fearing he had a gun, troopers fired three rounds, all of which hit Finicum. A loaded pistol was found in his jacket pocket.

Oregon investigators said Finicum posed a threat to officers by nearly running over one of them at the roadblock, and by reaching for a gun.

Occupation members in the other vehicle, including leader Ammon Bundy, surrendered.

Finicum's widow, Jeanette Finicum, on Tuesday rejected authorities' conclusion that her husband's shooting was justified and said she is talking with attorneys about taking her family's fight to court.

Speaking to reporters in St. George, Utah, Jeanette Finicum said she believes her husband was shot with his hands in the air trying to surrender. She argued he was reaching to his side as a reaction to the pain of being shot.

After Finicum's death and the arrests during the traffic stop, most occupiers cleared out of the wildlife preserve. A few holdouts extended the occupation to nearly six weeks before they surrendered Feb. 11.

Bundy and more than two dozen others with ties to the standoff have been charged with conspiracy to interfere with federal workers.