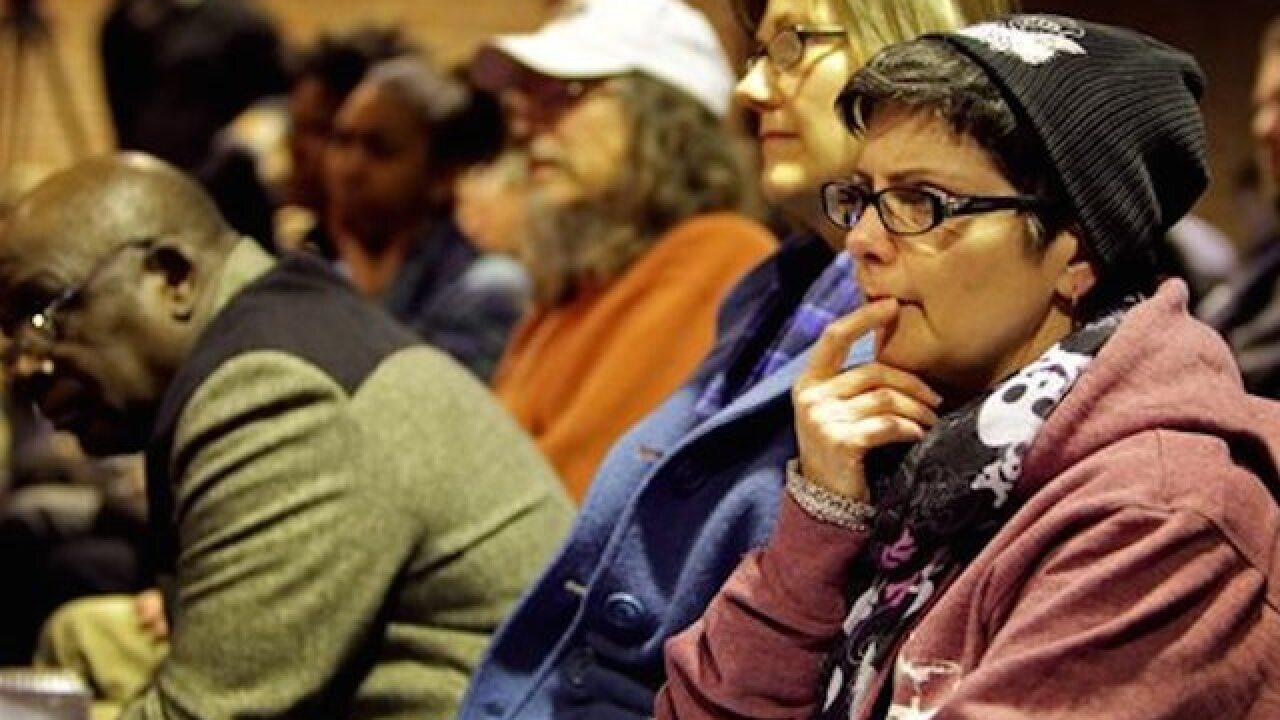 Copyright Associated Press
David Carson
<p>Stephanie VonDrasek, 54, listens to the public comments during the Ferguson city council meeting in Ferguson, Mo., on Tuesday, Feb. 9, 2016 where the consent decree with the United States Department of Justice was being talked about. The Ferguson city council voted to approve a modified version of the consent decree. VonDrasek has lived in Ferguson for more than half her life and has conflicted feelings about he consent decree. (David Carson/St. Louis Post-Dispatch via AP)</p>

FERGUSON, Mo. (AP) — If the federal government refuses to make changes to an agreement to reform Ferguson's police and court systems, city leaders are willing to confront the matter in court, the mayor said Wednesday.

The Ferguson City Council has asked the Justice Department for seven changes to the proposed settlement that the city spent seven months negotiating with the government. The vote on Tuesday evening drew swift criticism from both the department and many residents.

The settlement, known as a consent decree, is intended to correct problems identified in a federal investigation that followed the fatal shooting of 18-year-old Michael Brown by a Ferguson police officer. The federal report noted unconstitutional and discriminatory practices across the police force and municipal court system.

Mayor James Knowles III said Wednesday that the changes were deemed necessary after a detailed financial analysis showed just how expensive the original agreement would be — so expensive, Knowles said, that it could lead to dissolution of Ferguson.

"We're not trying to reopen negotiations. We tried to tell them what the city council will agree to," Knowles said. If the DOJ opts to sue Ferguson, "we'll have to deal with that in court," Knowles said.

Councilman Wesley Bell proposed the changes, several of which aim to reduce the cost of implementing the deal that officials worried could bankrupt the St. Louis suburb. The council signed off on the rest of the settlement, and Bell said he was confident the DOJ would agree to the changes.

But Vanita Gupta, head of the Justice Department's Civil Rights Division, said in a statement that the request "creates an unnecessary delay in the essential work to bring constitutional policing to the city, and marks an unfortunate outcome for concerned community members and Ferguson police officers."

If the Justice Department does not go along with the changes, a civil rights lawsuit is possible, potentially costing Ferguson millions of dollars in legal fees. Gupta did not specifically address whether a lawsuit would be filed but said the department would take "the necessary legal actions" to ensure Ferguson's police and court practices comply with the Constitution and federal laws.

Though it's not uncommon for city officials to seek changes to agreements even after they've been negotiated, the overwhelming majority of investigations into unconstitutional policing practices nonetheless end in a settlement rather than a lawsuit, said Samuel Bagenstos, the former No. 2 official in the Justice Department's civil rights division.

"If Ferguson insists on making significant changes to the deal they've already worked out, that's probably not going to work out well for them," said Bagenstos, a law professor at the University of Michigan. "And I think at the end of the day, Ferguson understands that, and we'll probably see a deal pretty soon."

Another provision states that parts of the agreement will not apply to any other governmental entity that might take over duties currently provided by Ferguson. That means, for example, that St. Louis County would not be beholden to the agreement if it takes over policing in Ferguson.

Knowles said St. Louis County police have already stated they would not consider taking over patrol in Ferguson if burdened with mandates of the consent agreement.

The council's vote came at the end of an often-boisterous meeting that had been moved to the Ferguson Community Center because of the crowd of around 300. The vast majority of speakers supported the original agreement.

Ferguson has been under scrutiny since the killing of Brown, whose father stood quietly at the back of the meeting. The black, unarmed 18-year-old was fatally shot Aug. 9, 2014, by white Ferguson police officer Darren Wilson during a confrontation on a street. A St. Louis County grand jury declined to charge Wilson, who later resigned. He was cleared of wrongdoing by the Justice Department.

The shooting was a catalyst in the Black Lives Matter movement and sparked a national dialogue about police use of force.

The agreement requires hiring a monitor, instituting police diversity training, and buying software and hiring staff to analyze records on arrests, use of force and other police matters.

A city analysis performed in recent days determined the city's cost would be up to $3.7 million for the first year alone, and $1.8 million to $3 million in each of the second and third years.

Some who spoke at the meeting agreed that the cost of the original agreement was simply too high for a city with a $14.5 million budget and already facing a $2.8 million deficit that largely stems from overtime for police during protests, lost sales tax revenue from businesses damaged in fires and looting, and legal expenses.