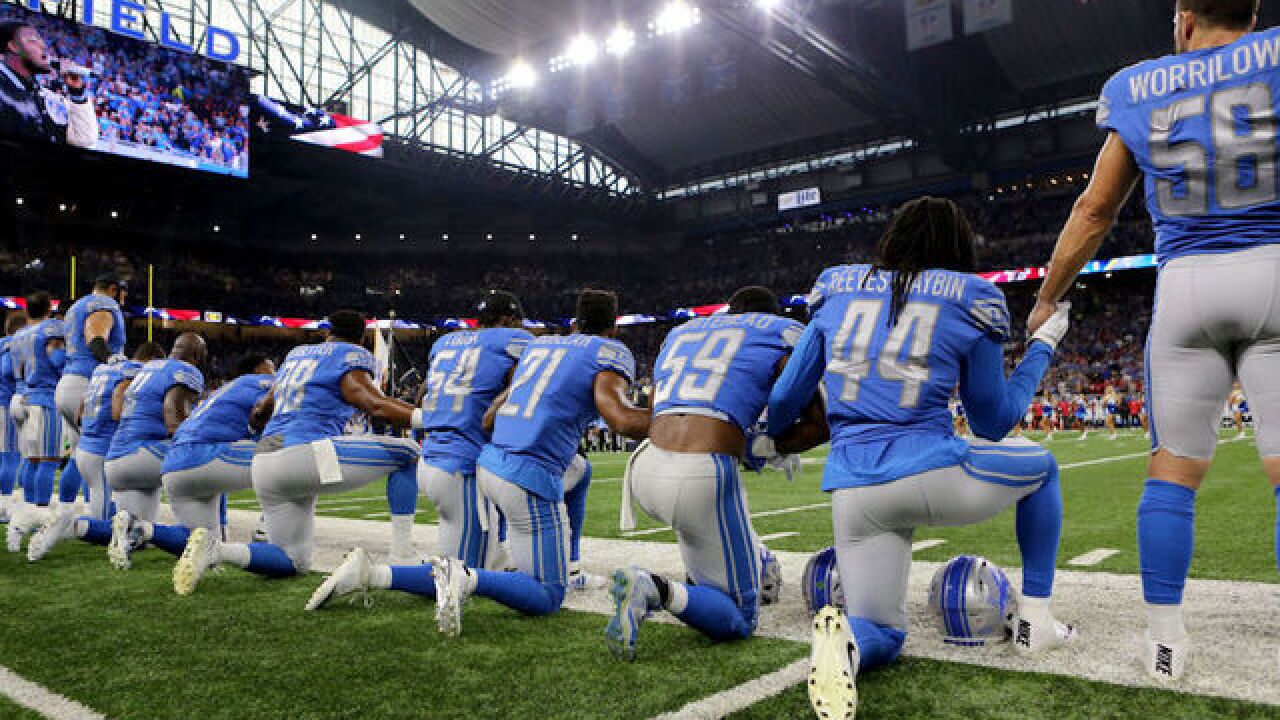 Copyright Getty Images
Rey Del Rio
<p>DETROIT, MI - SEPTEMBER 24: Members of the Detroit Lions take a knee during the playing of the national anthem prior to the start of the game against the Atlanta Falcons at Ford Field on September 24, 2017 in Detroit, Michigan. (Photo by Rey Del Rio/Getty Images)</p>

As Sunday's first nine games got underway, several teams found other ways to protest instead of kneeling during the national anthem. Later in the day, one notable exception came from the San Francisco 49ers.

Nearly half of the 49ers' roster were kneeling during the national anthem, while the rest of the team stood behind.

Unlike last week when the Pittsburgh Steelers stood in the tunnel during the national anthem, players were on the sideline as the anthem was performed.

On the opposite sideline, the Baltimore Ravens took a knee in protest before the national anthem began. Despite being the home team, the Ravens were responded with a chorus of boos from their fans.

This was after the Ravens' public address announcer said, "Please join Ravens players and coaches, and the entire Ravens organization, to pray that we as a nation embrace kindness, unity, equality and justice for all Americans.”

Other teams, such as the Lions and Jets, opted to lock arms during the national anthem. Two members of the Lions knelt while most of the team stood.

On Saturday, he reiterated his stance on the protests.

"Very important that NFL players STAND tomorrow, and always, for the playing of our National Anthem. Respect our Flag and our Country!" Trump tweeted.

ESPN's Adam Schefter tweeted photos of the Raiders' Marshawn Lynch wearing an “Everybody vs. Trump” t-shirt as he arrived to the game Sunday.

Kaepernick started the protests in the 2016 to raise awareness to inequality and police brutality. The quarterback has faced intense criticism for his actions, and has not been signed by an NFL team for the 2017 season.

A CNN poll shows that 49 percent of Americans oppose using the national anthem to protest racial issues, compared to 43 percent who approve. But the poll showed a difference of opinion based on race.

Fifty-nine percent of whites oppose using the national anthem to protest, compared to 82 percent of blacks who approve.

The poll also found that nearly one-in-four plan to boycott the NFL.