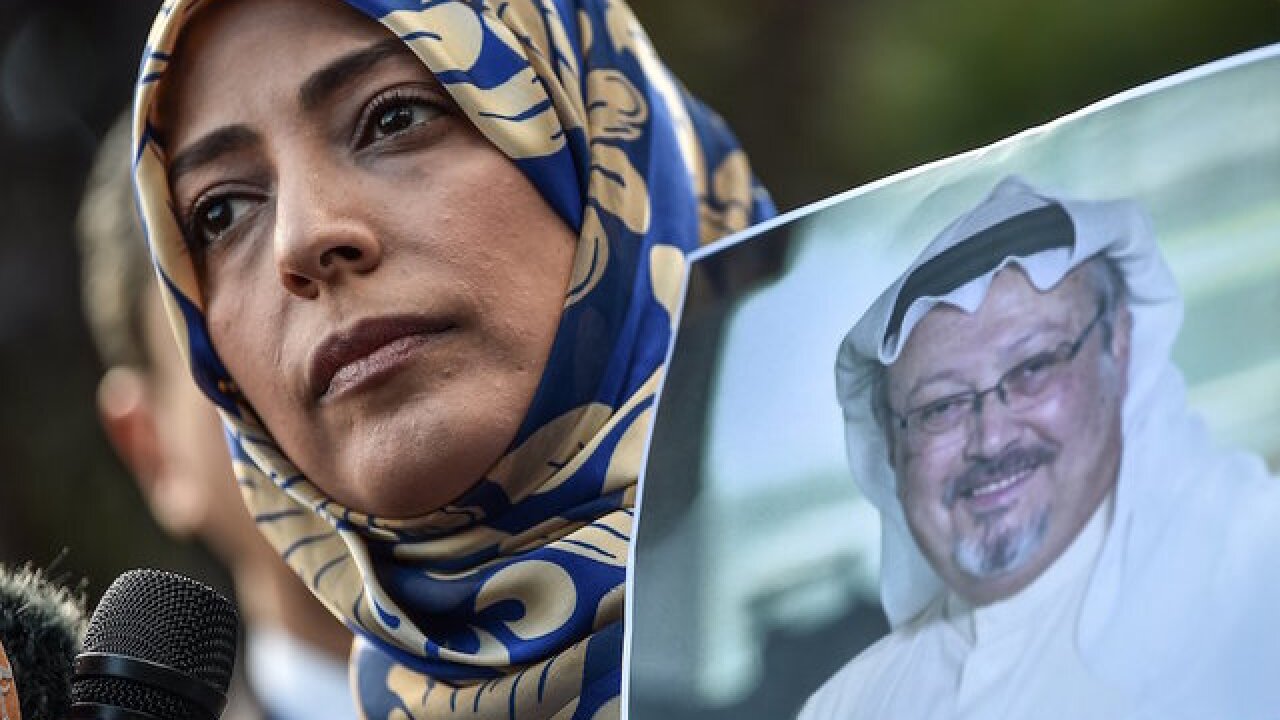 Image copyright 2018 Getty Images. All rights reserved. This material may not be published, broadcast, rewritten, or redistributed.
Ozan Kose/AFP/Getty Images
<p>The disappearance of Saudi journalist Jamal Khashoggi has sent a chilling message to dissidents abroad, stoking fears among activists of a broadening crackdown beyond the kingdom's borders.</p>

Jamal Khashoggi's fiancée implored President Donald Trump and first lady Melania Trump "to help shed light on" his disappearance in an op-ed  published by The Washington Post on Tuesday evening.

Khashoggi, a prominent Saudi journalist, vanished October 2 after entering the Saudi consulate in Istanbul. As a columnist for the Post, Khashoggi was a frequent critic of the Saudi regime.

On Saturday, Turkish officials told the Post that Khashoggi had been killed at the Saudi consulate. CNN has not been able to independently confirm these reports, and the Saudi government has denied them.

Khashoggi was at the consulate to obtain paperwork so he could marry his Turkish fiancée, Hatice Cengiz.

Trump said Monday that he was "concerned" about reports of Khashoggi's disappearance.

Cengiz wrote in the op-ed that Khashoggi had gone to the Saudi consulate in Istanbul "despite being somewhat concerned that he could be in danger." He had no warrant for his arrest in Saudi Arabia and didn't think that the tensions between himself and the Saudi royal family were at a dangerous level.

"In other words, he did not mind walking into the Saudi Consulate in Istanbul because he did not believe that something bad could happen on Turkish soil," Cengiz wrote. "It would be a violation of international law to harm, arrest or detain people at a diplomatic mission, he said, and noted that no such thing had ever happened in Turkey's history."

After three hours of waiting, Cengiz was told that Khashoggi had already left but she says "there's no proof that he came out."

"Although my hope slowly fades away each passing day," Cengiz writes, "I remain confident that Jamal is still alive."

Trump had spoken about Khashoggi's disappearance briefly with reporters on Monday.

"I don't like hearing about it, and hopefully that will sort itself out. Right now, nobody knows anything about it," he said.

"There's some pretty bad stories about it," Trump added. "I do not like it."

"Although this incident could potentially fuel a political crisis between the two nations, let us not lose sight of the human aspect of what happened," Cengiz writes.

"Jamal is a valuable person, an exemplary thinker and a courageous man who has been fighting for his principles. I don't know how I can keep living if he was abducted or killed in Turkey."