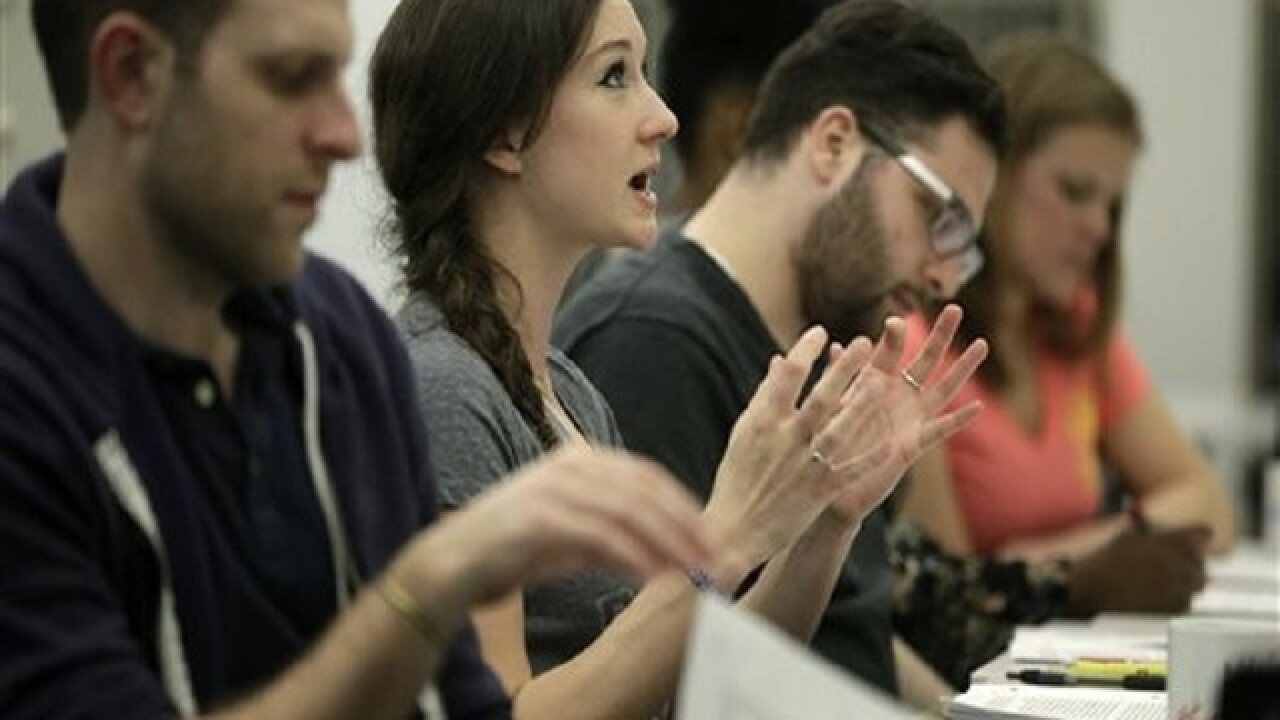 BOSTON (AP) — Boston Marathon Bombing: The Play?
It sounds improbable, but "Finish Line: The Untold Stories of the 2013 Boston Marathon" opens Thursday with a simple mission — to tell the stories of bravery, resilience and recovery through the eyes of people who lived them.
The Boston Theater Company production draws from interviews with survivors, runners, doctors, first responders and others, with actors using verbatim transcripts to convey each person's story on stage.
"Finish Line" will have a 17-day run of preview performances at the NonProfit Center to coincide with the third anniversary of the twin bombings that killed three people and injured more than 260. Its world premiere opening is scheduled for April 2017.
Unlike books about the attack or the Mark Wahlberg movie "Patriots Day," now being filmed in Massachusetts, "Finish Line" does not attempt to re-create the bombings or portray the brothers responsible for the attack. Instead, the documentary play focuses on people who were touched by the violence and came out stronger.
The play's co-creators, Joey Frangieh and Lisa Rafferty, said they wanted to produce something that focused not on the horror of April 15, 2013, but instead on the kindness shown that day and in the days that followed.
"It's about the runners, it's about the spectators, it's about a city, a state, a country that chose to not allow an act of evil, an act of terrorism, an act of violence to define who we are," said Frangieh, producing artistic director of the Boston Theater Company.
There's Army Master Sgt. Bernard "Chris" Spielhagen II, an Iraq War veteran who had just finished running the 26.2-mile course when the first bomb exploded. He jumped in to help, working with two National Guardsmen to break a wooden bench to make a stretcher for a woman with severe leg injuries. Spielhagen wrapped her leg with a volunteer's jacket, made a splint and stayed with her until an ambulance came.
Then there's Harry McEnerny, a triage technician in the emergency room at Beth Israel Deaconess Medical Center who recalls receiving ambulance after ambulance filled with wounded patients. The staff at Beth Israel was in a panic because of rumors that another Boston hospital had been bombed. McEnerny wanted to run away but, instead, he stayed and worked for many hours, helping to save patients. He still feels a significant amount of guilt for wanting to leave, calling that urge his "greatest moment of defeat."
And there's Brad Jensen, a man who had just passed the finish line with his mother, who had run the last six miles with him for support. After the explosions, his father found him and his mother — unhurt — and they walked away together. Jensen talks about how his parents struggled with feelings of guilt for not staying and helping the injured. Brad tells his parents that they were simply following a primal parental instinct — protecting their child.
John Tracey, the actor who portrays Jensen in "Finish Line," said the play is filled with "great little microscopic moments" of how the bombings affected people who escaped physical wounds, but were deeply affected in other ways.
"Brad wasn't injured, he didn't lose anyone, but what he did get — aside from surviving this traumatic experience — was this great recognition of that (parental) instinct and how consuming his parents' love for him is," Tracey said.
The play begins on the day of the bombings and ends at the marathon finish line a year later, following the resilience of survivors such as Lee Ann Yanni, a physical therapist who was at the 2013 marathon to cheer on two of her patients. The first bomb fractured her fibula and left a half-dollar size piece of shrapnel in her left leg. She also had tendon and nerve damage.
Despite her injuries, Yanni told people she would follow through on her plan to run the Chicago Marathon six months later. She did, then went on to run the 2014 Boston Marathon six months after that.
"There wasn't anything," she said, "that was going to stop me."
Associated Press 2016