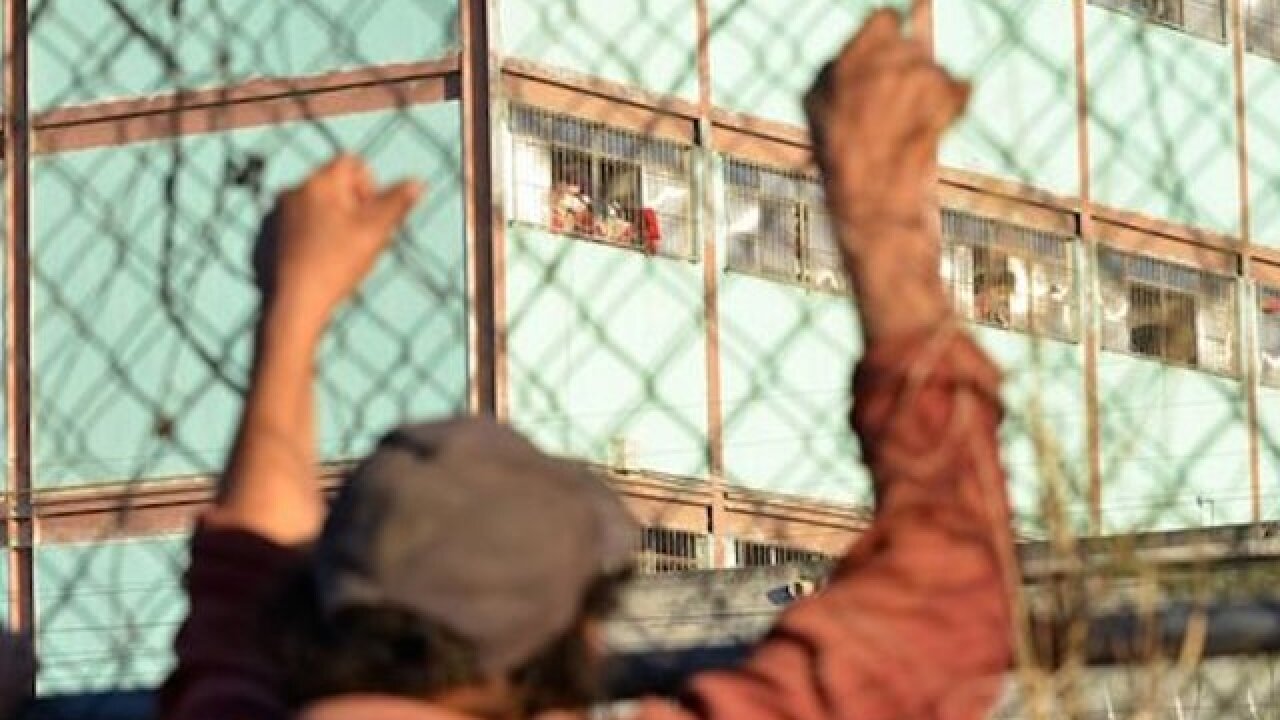 Copyright Associated Press
Emilio Vazquez
<p>A man holds on to a fence surrounding the Topo Chico prison, where a riot broke out around midnight, in Monterrey, Mexico, Thursday, Feb. 11, 2016. Dozens of inmates were killed and several injured in a brutal fight between two rival factions at a prison in northern Mexico on Thursday, the state governor said. (AP Photo/Emilio Vazquez)</p>

MONTERREY, Mexico (AP) — A brawl between rival drug gangs at an overcrowded penitentiary in northern Mexico turned into a riot Thursday, leaving 49 inmates dead and 12 injured in the country's deadliest prison melee in years.

No escapes were reported in the clash at the Topo Chico prison in Monterrey, said Nuevo Leo state Gov. Jaime Rodriguez. The riot took place on the eve of Pope Francis' arrival in Mexico, a visit that is scheduled to include a trip next week to another prison in the border city of Ciudad Juarez.

Rodriguez said in the morning that 52 had died, but he lowered that by three in the late afternoon. The reason for the changed death toll was not clear.

At a news conference the governor read a list of 40 names of confirmed victims, saying five of the remaining bodies had been charred by fire and four were yet to be positively identified. One of the injured was in grave condition.

The fighting began around midnight with prisoners setting fire to a storage area, sending flames and smoke billowing into the sky. Rescue workers were seen carrying injured inmates — some with burns — from the facility.

Rodriguez said the clash was between two factions led by a member of the infamous Zetas drug cartel, Juan Pedro Zaldivar Farias, also known as "Z-27," and Jorge Ivan Hernandez Cantu, who has been identified by Mexican media as a Gulf cartel figure.

A turf war between the gangs bloodied Nuevo Leon state and neighboring Tamaulipas between 2010 and 2012. The Zetas once nearly controlled the area around Monterrey.

Zaldivar Farias was a suspect in the 2010 killing of American David Hartley on Falcon Lake, which makes up part of the border between Mexico and Texas. Hartley was reportedly gunned down while touring the reservoir with his wife on jet skis.

A crowd of people bundled against the cold gathered at the prison gates, demanding to be let in to learn the fate of their relatives. Some threw rocks, kicked and shook the gates as riot police with plastic shields kept the crowd out.

"My brother is OK," said Jose Eduardo Gonzalez, one of those allowed inside. "They only let me see him for a few minutes, just to see that he's alive, and then they took me out because they said they had to give the rest a chance to go in."

Authorities were reinforcing security at other prisons and had transferred some inmates out of Topo Chico, Rodriguez told Milenio. After initially saying the fighting didn't involve gunfire, but he later reported that at least one of the victims was shot to death.

A month earlier, 31 died in a Tamaulipas prison where inmates set upon each other with makeshift knives, clubs and stones.

According to a 2014 report by the National Human Rights Commission, Topo Chico was designed to house 3,635 prisoners but actually held about 4,585 that year. Inmates there used violence as a way of exerting control in the prison, it added.

Another report by the commission in 2013 highlighted violence and inmate control in many of Mexico's prisons, symptoms of corruption and lack of resources.

The report, based on visits and interviews at 101 of the most populated facilities, found that 65 of them were run by inmates, not authorities.

Leslie Solis, a security and justice researcher at the public-policy think tank Mexico Evalua, said the commission's most recent rating of Topo Chico indicated that "we had it coming" and "all the conditions were in place for this" — too few guards, poor training and the entry of illicit objects and substances.

Constitutional reforms in 2008 and 2011 tried to reorient Mexico's prison system toward respect for human rights and preparing convicts to reintegrate into society, but in most of the country that has not occurred, Solis added. Some parts are so under the thumb of organized crime that authorities do not have the resources to confront it.

Potential solutions include more judicious use of prison sentences for nonviolent crimes, and locking up fewer people who are still waiting for Mexico's plodding judicial system to handle their cases. At Topo Chico, for example, 26 percent of prisoners were still awaiting a sentence.

"This clash ... has to serve as an alarm or a call to authorities to take responsibility and not permit this to happen again," Solis said.