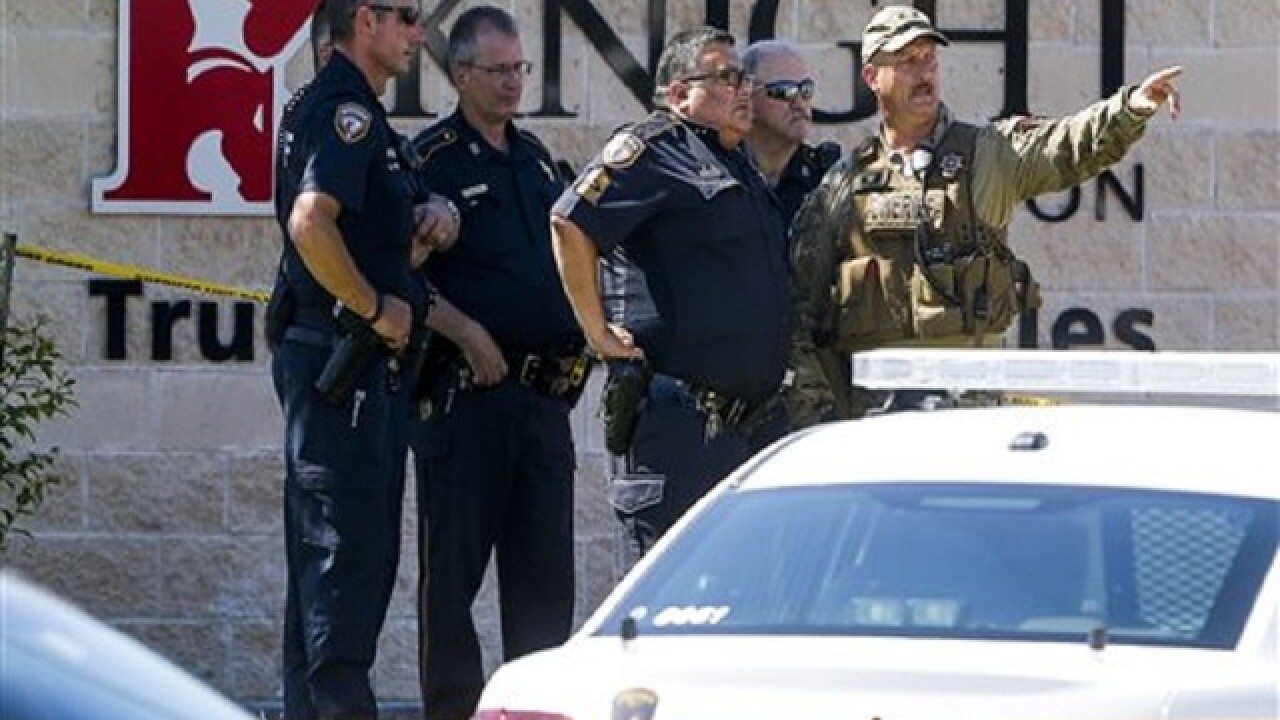 Michael Ciaglo
<p>Sheriff's deputies surround Knight Transportation after a recently dismissed man opened fire inside the facility, fatally shooting a former co-worker before turning the gun on himself, Wednesday, May 4, 2016, in Katy, Texas. (Michael Ciaglo/Houston Chronicle via AP) MANDATORY CREDIT</p>

KATY, Texas (AP) — A man dismissed last month from a Houston-area transportation company stormed into the facility and opened fire on Wednesday, fatally shooting a former co-worker and injuring two others before turning the gun on himself, saying his life had been ruined, sheriff's officials said.
The man was armed with a shotgun and a pistol when he arrived at the Knight Transportation office in Katy, about 20 miles west of Houston, according to Harris County Sheriff Ron Hickman. The sheriff said the man "parked right outside the building and came straight in."
The man was heard by workers saying something to the effect of "you all ruined my life" as he walked through the building, and may have been looking for someone, sheriff's spokesman Ralph Gonzales said.
The gunman fatally shot one man, who was found dead at the scene by responding officers. Two other workers were injured by shrapnel or other debris from the gunfire, and both were treated at the scene, Gonzales said.
The names of the gunman and the victims haven't been released. The sheriff said one deputy injured his knee during the incident.
Hickman had no information on how long the man had been employed by Knight Transportation, which provides truckload transportation services.
The Phoenix-based company released a statement Wednesday saying work at the facility was being suspended until the investigation was complete. It said counselors would be on site to support employees.
The company confirmed an employee was killed during the shooting, saying: "Our deepest sympathies are with the family during this difficult time."
"This was the action of a lone former employee," the company added. "Knight is doing everything possible to ensure the safety of all of its employees."
The sheriff said during a news conference shortly after the shooting that the gunman had been fired that morning, but Gonzales said investigators later determined the dismissal happened two weeks ago.
Numerous patrol vehicles surrounded the facility as deputies responded to reports of gunfire. A nearby high school went on lockdown for about an hour as a precaution, said Denisse Cantu, a spokeswoman with the Katy Independent School District. She said three other district campuses also were briefly closed during the incident.
Associated Press 2016