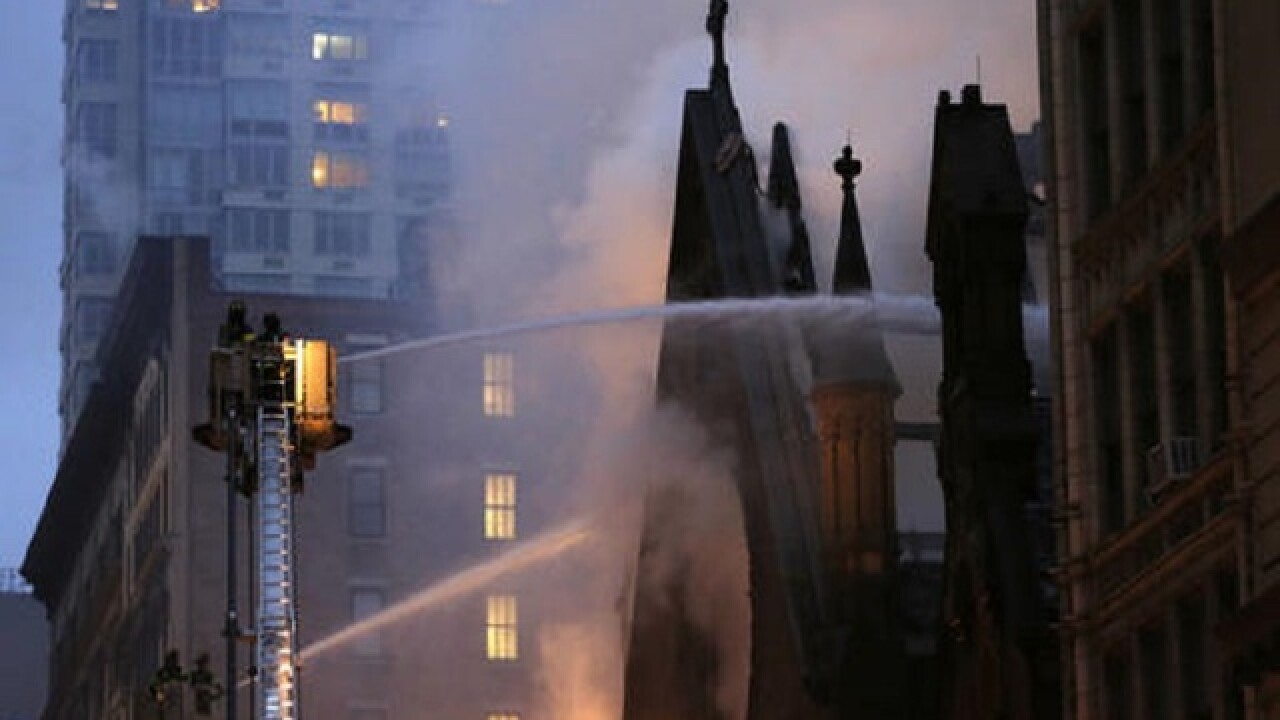 Kathy Willens
<p>Firefighters battle flames at the historic Serbian Orthodox Cathedral of St. Sava, Sunday, May 1, 2016, in New York. The church that was constructed in the early 1850s and was designated a New York City landmark in 1968. (AP Photo/Kathy Willens)</p>

NEW YORK (AP) — It was a day of sadness for Orthodox worshippers who celebrated Easter at a historic church in Manhattan on Sunday, just hours before it was destroyed in a raging fire that sent plumes of smoke billowing into the skyline.
Authorities reported one minor injury in the blaze that started just before 7 p.m. at the Serbian Orthodox Cathedral of St. Sava in Manhattan.
Three hours later the main body of the fire was knocked down, but firefighters still were putting out small pockets of flames, officials said. Authorities did not say what caused the fire.

Fire officials said the church's caretaker ran inside the church to try to put out the blaze but suffered minor smoke inhalation and had to be rescued.
"I feel like I'm in a nightmare right now," said church priest, Father Djokan Majstorovic as he tried to get to the fire scene that was blocked off by firefighters.
Alex Velic, 31, the caretaker's stepson, told the Daily News he lives next door. He said he smelled smoke and came outside and saw the church on fire.
"Once the fire caught the wood there was flames coming out of the top of the church. That's when people were going crazy," Velic said. "I'm in shock. I don't know what to say. It's sad."
The fire completely destroyed the roof of the Gothic Revival style building. It broke out on the same day Orthodox Christians around the world celebrated Easter. The church website listed services that morning and an Easter luncheon at 1 p.m.
Dex Pipovic, who said he had been going to the church for seven years, told PIX11 News the fire had left him heartbroken. "I was just inside that building three hours ago," he said.
The church was designed by architect Richard M. Upjohn and was built in the early 1850s. One of its earlier congregants was novelist Edith Wharton, who wrote "The Age of Innocence." She was married in the church in 1885.
The Serbian Orthodox Church purchased the building from the Episcopal Diocese in New York in 1943. The building was designated a city landmark in 1968.
"This is a huge loss for the community. In addition to being a place of worship, this historic building was a New York City landmark, treasured by the people of Chelsea," said Council Member Corey Johnson, who called for a full investigation into the cause of the fire.
Associated Press 2016