Florence: At least 32 dead in 3 states, flooding continues and Virginia hit by tornadoes 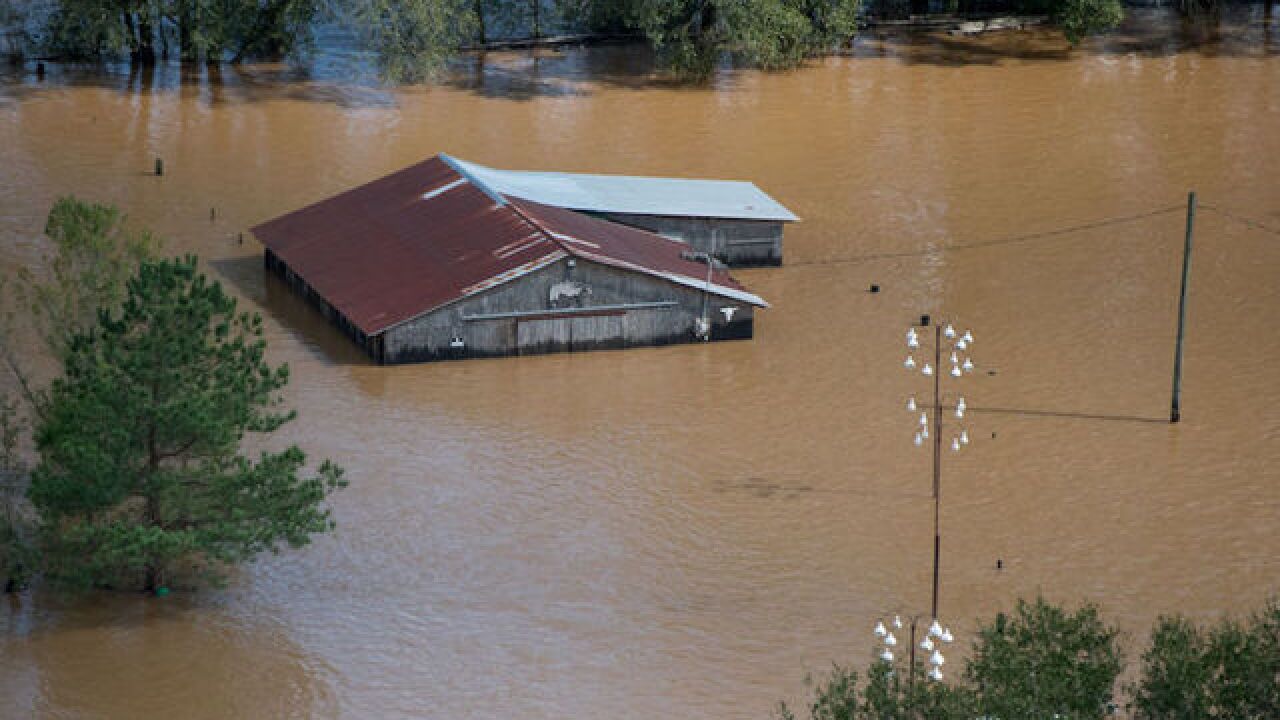 Image copyright 2018 Getty Images. All rights reserved. This material may not be published, broadcast, rewritten, or redistributed.
Sean Rayford
<p>Floodwaters inundate a barn after Hurricane Florence struck the Carolinas Monday, Sept. 17, 2018, near Wallace, South Carolina. Many rivers in the Carolinas are approaching record flood stages and their levels will continue to rise through the week. </p>

North Carolina can't take any more flooding, but it's going to have to anyway.

The Cape Fear River near Fayetteville has quadrupled in depth, and it's only going to get worse -- likely bringing more untold misery.

But there are glimmers of hope in the wake of Florence. Some North Carolina residents are now able to return home, hoping to reclaim their lives.

Four days ago, the Cape Fear River near Fayetteville was 15 feet deep. By Tuesday morning, it had reached 60 feet -- and it still hasn't crested.

Overflow from Cape Fear has already created a new river on what used to be Interstate 40 in Pender County.

"This isn't a river ... this is Interstate 40," the North Carolina Department of Transportation tweeted, along with drone footage of the scene. "This illustrates our message that travel in this area is impassable and unsafe."

When it comes to flooding, no one cares that Florence has left the Carolinas. Bloated rivers gushing downstream toward already flooded cities mean more homes are at risk.

Residents get glimpses of damage after Florence

For the first since Florence ravaged North Carolina, residents in the island town of Wrightsville Beach are allowed to return homes Tuesday.

But it will be a while before life gets back to normal. A curfew will be in place from 8 p.m. to 6 a.m., and access to the nearest big city on the mainland -- Wilmington -- is still greatly hampered.

"While the island itself did not sustain severe damage, at this time most roads leading to the Wilmington area are impassable due to flooding," the town's website says.

In North Carolina, cities such as Wilmington and Lumberton are bracing for more flooding.

Wilmington was the epicenter of Florence's destruction. Rainfall totals of 26.58 inches have submerged much of the city, effectively cutting it off from the rest of the state.

But by Tuesday morning, a bit of good news: Two roadways previously blocked are now passable, Wilmington Mayor Bill Saffo said. Eastbound I-40 at Exit 73 and westbound US 421 at Exit 385 are now open.

In Lumberton, where residents scrambled to plug the levee system , parts of Interstate 95 will remain closed until the Lumber River drops below 21 feet. That might not happen until next week, said Corey Walters, Lumberton's deputy director of public works.

But it's impossible to say how deep the Lumber River is now, because the official river gauge stopped working a few days ago. Walters estimated the current depth is about 25 feet.

Wilmington will have its wettest year in the city's 140 years of record-keeping. More than 86 inches of rain have fallen so far. On average, Wilmington gets about 43 inches by this time of the year.

Before Florence sputters out for good, it also struck Virginia with a litany of tornadoes. An estimated 15 to 20 tornadoes touched down in at least six counties Monday, the state's Department of Emergency Management Joint Information Center said.

One tornado caused the first Florence-related death in Virginia when a building collapsed in Chesterfield County south of Richmond.

Chesterfield Fire and EMS spokesman Lt. Jason Elmore tweeted drone footage of the tornado's destruction, including buildings that were annihilated.

Learning 'how vulnerable we all are'

In South Carolina, John Cassidy's 27-year-old printing business in Conway was on the brink of flooding Monday. Water was inches away from the door at Duplicates INK, but that didn't stop Cassidy or his employees.

They were trying to get one last big order out before the water moved in, and they put sandbags around the biggest, most expensive pieces of equipment hoping to safeguard them.

"It just makes you realize how vulnerable we all are," Cassidy said.

"I've accepted it, my building is gonna be flooded. We're just going to deal with what we have to deal with and be as tough as we can be and move through it. It sucks."

Cassidy said he continued working because he made commitments to his customers, and because 10 families rely on paychecks from the business.

"We can't just shut the door down," he said.

Cassidy plans to relocate his staff to a building in downtown Conway, CNN affiliate WBTW reported. He said several competitors and friends will help fill the company's orders for them.

Of the more than 30 storm-related deaths, at least 25 were in North Carolina, six were in South Carolina and one was in Virginia. They include:

• A 3-month-old who died when a tree fell on a mobile home in Dallas, North Carolina.

• One-year-old Kaiden Lee-Welch, who was swept away by rushing waters Sunday and later found dead in Union County, North Carolina.

• An elderly Union County man whose body was found in his submerged car.

• A woman who went into cardiac arrest in Pender County, North Carolina. When emergency responders tried to reach her, their path was blocked by fallen trees.

• An 81-year-old man who fell and struck his head while packing to evacuate in Wayne County, North Carolina.

As of Tuesday morning, Florence was about 105 miles west-northwest of New York City and north-northwest of Philadelphia, the National Weather Service said. It was moving northeast at 13 mph.

The storm is expected to produce "heavy to potentially excessive rainfall" throughout Tuesday in parts of the northern mid-Atlantic states and southern New England.

By Tuesday night, after its five-day assault on the East Coast, Florence will finally move offshore into the Atlantic.