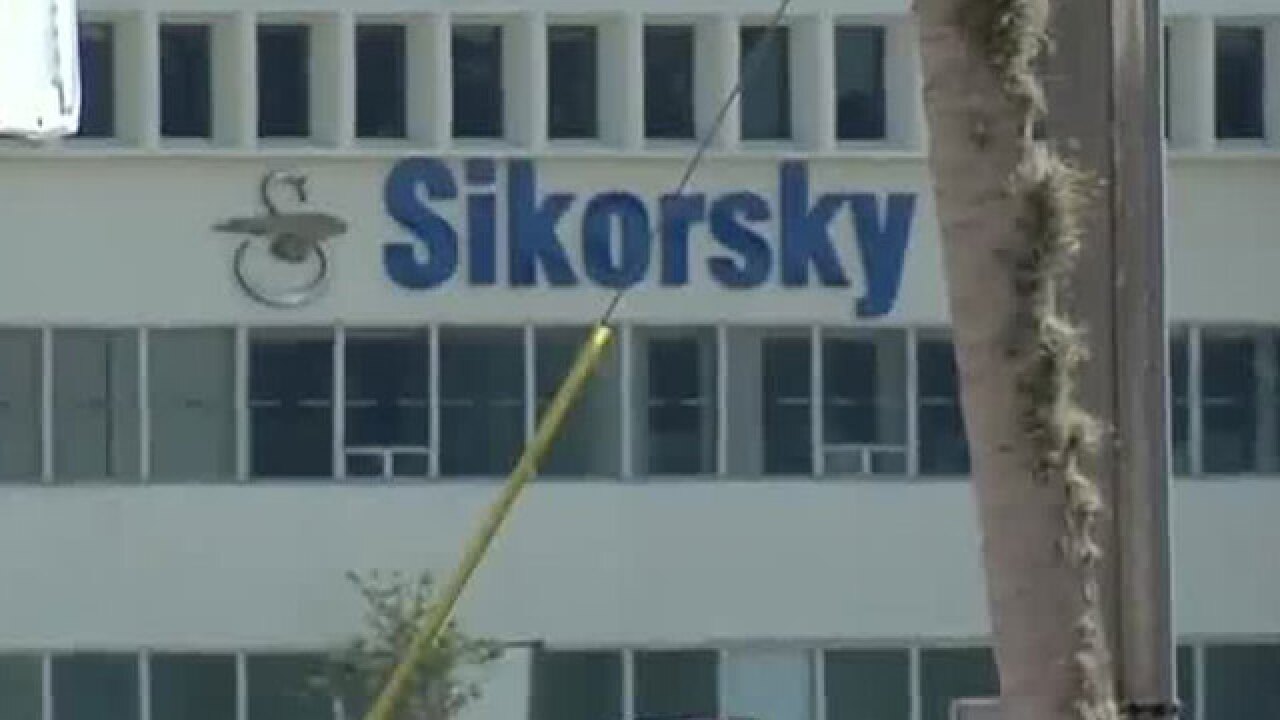 FLORIDA — As many as 200 employees at the Lockheed Martin/Sikorsky facility in Jupiter, Florida could be affected by potential layoffs this summer.

The workers union representing the employees -- Teamsters Local 1150 -- said they are doing everything they can to find people new positions within the company.

Journalists at WPTV in West Palm Beach, Florida first heard about the likely layoffs from employees who reached out earlier this week and expressed concern about who would be on the chopping block.

The layoffs involve workers in the Blackhawk military helicopter program, which shares space at the United Technologies facility off Beeline Highway in Jupiter. There are a total of 500 employees working there.

No names or positions of who will be laid off have been finalized.

In a phone interview with WPTV on Wednesday, Calo said unfortunately, they're seeing a big downtown in military work for the Blackhawk and Seahawk helicopters they build.

"In the Florida plant, they were working on Canadian maritime military helicopter program, which is dwindling down now, coming to an end," he said.

"It's starting to look a little better for the out years, but nothing is signed yet. But we some irons in the fire, we're hopeful," said Calo.

Sikorsky was bought by Lockheed Martin for $9 billion in 2015, which could also be a contributing factor the changes the Sikorsky is undergoing right now.

"Naturally when you go through mergers and acquisitions, there are things that can happen with companies. They can either increase in terms of employees or they downsize," said Kelly Smallridge, president and CEO of the Palm Beach County Business Development Board.

Her agency monitors and recruits businesses to establish operations in Palm Beach County.

"While we hate to see any company lay off employees in Palm Beach County, this is the time that other companies will be happily take any kind of skilled worker over to their operations," she said.

Smallridge said there are 1,300 aerospace and engineering companies operating in this county alone and the BDB is on stand-by to assist any employees affected by the Sikorsky layoffs.

"We're ready to help place those employees in other operations. There are 67 corporate headquarters in Palm Beach County, so there's ample business opportunity," she said.

Calo said Lockheed is still working on crunching numbers to determine the final number of layoffs. While employees feared the number would push 200, Calo said after factoring in early retirements and relocations for some positions, that number could be much lower.

"We had a significant number of people sign up for an early out package," he said.

Some workers could be offered jobs at other locations in Connecticut and Alabama.

"I don't think we will be able to offset all of the involuntary stuff. It is a huge downturn in work, but as I said, we're fighting every day," said Calo.

"Strong operational and program execution in the first quarter allowed us to increase our financial guidance for sales, profit and earnings per share," said Lockheed Martin Chairman, President and CEO Marillyn Hewson, in the news release. "Our team remains dedicated to performing with excellence, offering affordable and innovative solutions for our customers, and delivering exceptional value to our shareholders."

Under the Rotary and Missions systems report, which includes Sikorsky, the report states that net sales in the first quarter of 2018 increased $96 million, or three percent, compared to the same period in 2017.

Teamsters Local 1150 is planning to hold a meeting with employees to discuss the layoffs this week. The union also represents workers at facilities in Alabama and Connecticut.

Union leaders are even driving to Washington, D.C. this week to ask Congress for help.

For layoffs of 50 or more people, WARN notices have to be filed with the Florida Department of Economic Opportunity.

A search of the 2018 notices shows that Lockheed Martin filed a WARN notice for 82 layoffs at Hurlburt Field Air Force Base in Hurlburt Field, Florida. A notice has not yet been filed for the Jupiter facility. The company is required to give a 90-day notice to the state before laying people off.

We have not made any announcements but continually review all our business operations to ensure we are properly sized for current and longer-term business requirements and economic conditions within our marketplaces.