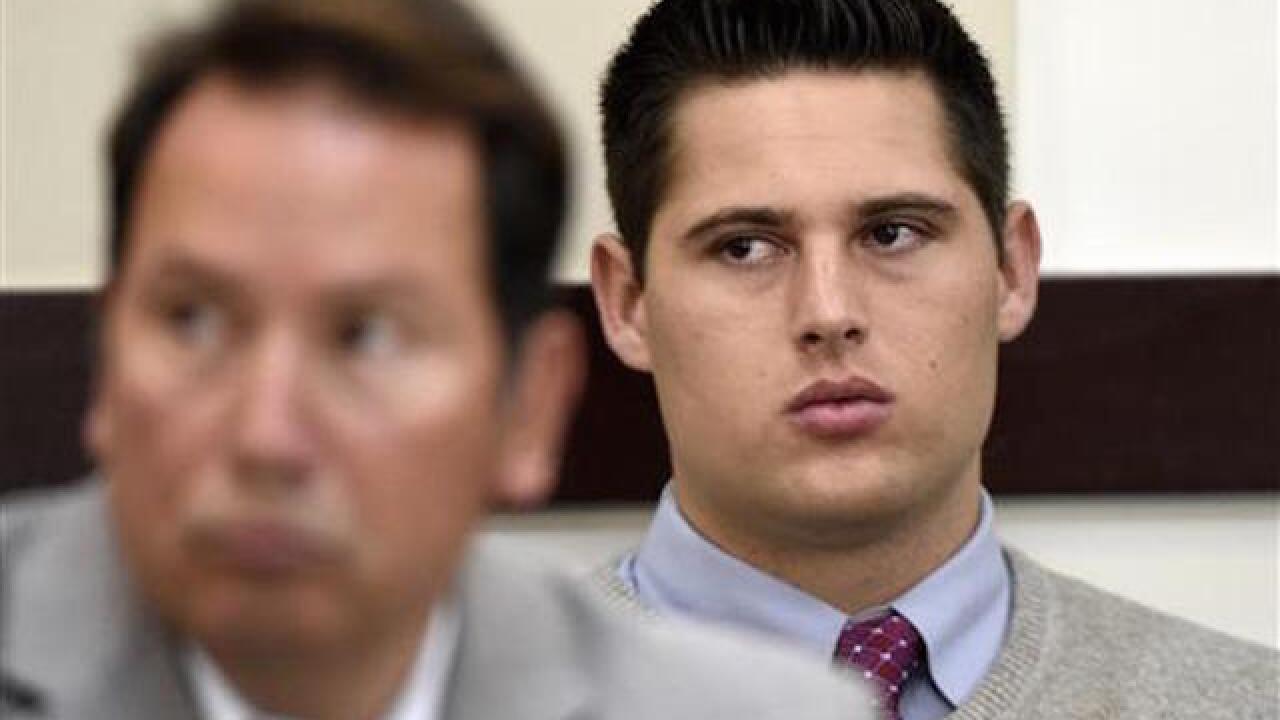 <p>Brandon Vandenburg, right, a former Vanderbilt football player, listens during his rape trial Saturday, June 18, 2016, in Nashville, Tenn. A jury earlier convicted Vandenburg after a trial that featured graphic cellphone videos and photos of the attack taken by the former players. However, the verdict was thrown out after it was discovered that the jury foreman had been a victim of statutory rape. (Larry McCormack, The Tennessean via AP)</p>

NASHVILLE, Tenn. (AP) — A jury has convicted a former Vanderbilt football player on all counts after finding that he encouraged his teammates to rape an unconscious woman he had been dating. It took jurors a little more than four hours of deliberation before finding Brandon Vandenburg guilty on five counts of aggravated rape and two counts of aggravated sexual battery. In addition, he was convicted of one count of unlawful photography.

Vandenburg's mother cried in the courtroom Saturday after the verdict was read. He appeared to be weeping as he was taken away.

The verdict comes amid a furor over the six month sentence a former Stanford swimmer was given for sexually assaulting an unconscious woman. It also comes during an ongoing debate about sexual assaults on the nation's college campus and the conduct of student athletes.

The lives of everyone involved have been ruined, Deputy District Attorney General Tom Thurman said of the case. He said he hoped the widespread publicity surrounding the Vanderbilt case would send a message.

The jurors in the this case had to decide whether to hold Vandenburg, 23, criminally responsible for what teammates were accused of doing to the female student in a dorm room in June of 2013.

His defense had maintained that he was drunk and should not be held responsible for what players he didn't even know did to the woman.

Four former players were all charged in the case but only two were accused of raping and sexually assaulting the woman.

Throughout the trial, Vandenberg was portrayed as a man who violated the female student's trust by plying her with alcohol and then encouraging teammates to sexually assault her.

"He served her up to three strangers — for whatever reason, it doesn't matter, is that he did it," Assistant District Attorney Jan Norman told jurors in closing arguments Saturday.

Prosecutors told jurors that he passed out condoms to the other players, videoed the rape and sent footage to friends as it was happening.

The defense had maintained that Vandenberg was a newly-arrived recruit to the Nashville school and had asked teammates outside the dorm to help him carry the unconscious woman into his room after he couldn't get her into her apartment. Vandenberg's lawyers told jurors the other players were on the woman as soon as they got her in the room.

The trial featured graphic videos and photos that were taken from the players' cell phones.

"The videos are disturbing," Albert Perez, one of Vandenberg's attorneys told jurors in closing. "They make you mad, they make you sad." But Perez pointed out that the sex acts charged in the indictment were for things the other players did.

The victim in the case, who was then a 21-year-old neuroscience major, testified that she had no memory of the event. She said Vandenburg would later tell her that she had gotten drunk and sick and he took care of her, and she was embarrassed as a result. Prosecutors have suggested that she was under the influence of a date-rape drug.

Nashville Police became involved after Vanderbilt officials contacted them when security camera footage at the school showed players carrying an unconscious woman in a dorm room.

Vandenburg and Cory Batey were convicted last year on multiple counts of aggravated rape and aggravated sexual battery. The verdicts, however, were thrown out after it was revealed that a juror had not disclosed that he had been a victim of statutory rape.

Batey was convicted again in April. Both he and Vandenburg face a minimum sentence of 15 years in prison for aggravated rape with no possibility of parole.