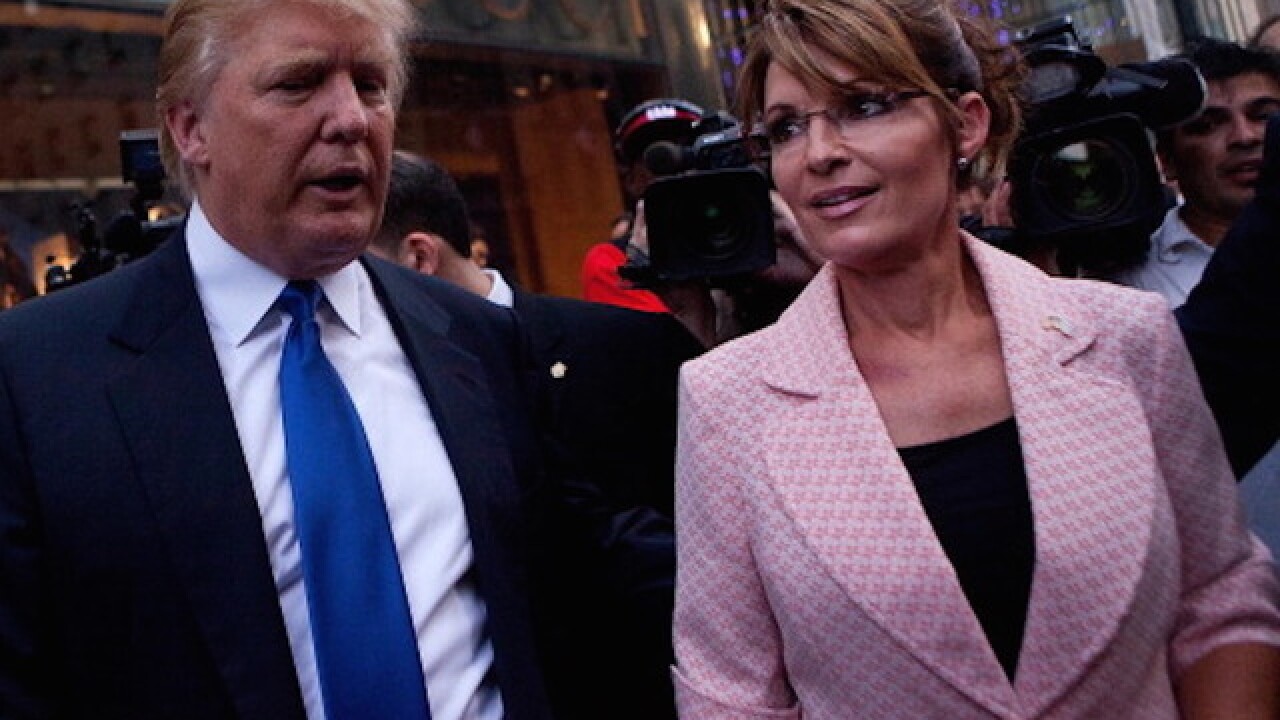 Andrew Burton
<p>NEW YORK, NY - MAY 31: Former U.S. Vice presidential candidate and Alaska Governor Sarah Palin (R), and Donald Trump walk towards a limo after leaving Trump Tower, at 56th Street and 5th Avenue, on May 31, 2011 in New York City. Palin and Trump met for a dinner meeting in the city. (Photo by Andrew Burton/Getty Images)</p>

"I am greatly honored to receive Sarah's endorsement," Trump said in a statement announcing the support of the former Alaska governor and former running mate of Sen. John McCain in his 2008 bid for the White House. "She is a friend, and a high-quality person whom I have great respect for. I am proud to have her support."

Palin is scheduled to appear with Trump at a rally at an agricultural center at the Iowa State University later Tuesday and will also be joining Trump at two events Wednesday, including a rally in Tulsa, Oklahoma.

The endorsement comes less than two weeks ahead of the critical lead-off Iowa caucus, where Trump is locked in a dead heat with Texas Sen. Ted Cruz.

In the statement announcing the endorsement, Trump's campaign described Palin as a conservative who "helped launch the careers of several key future leaders of the Republican Party and conservative movement." The statement also quoted Cruz as once saying he "would not be in the United States Senate were it not for Gov. Sarah Palin. ... She can pick winners."

Campaigning in New Hampshire, Tuesday, Cruz said, "Regardless of what Sarah intends to do in 2016, I will remain a big, big fan of Sarah Palin."

Trump's national political director Michael Glassner previously worked with Palin, who was a virtual newcomer to the national political arena when McCain named her as his running mate. She has since risen to prominence as one of the most outspoken conservatives in the party.

She signed on as a Fox News commentator after resigning as Alaska's governor in 2010, a job she held until last year.

Asked Tuesday morning about his thoughts on a potential Palin endorsement, as rumors of her potential backing swirled, Trump said, "I'm a big fan of Sarah Palin."

While Trump said he doesn't typically put much stock in endorsements, he said, "I think it could very well result in votes."

GOP consultant Kevin Madden said the endorsement's timing will help Trump to crowd out Cruz's message at a crucial time in the race.

"I think it helps Trump overwhelm the news cycle with Trump coverage at a critical time," he said. "It sort of denies Ted Cruz any chance to get back on offense."

Madden also said that Palin's support could help shield Trump from charges that his past positions make him too liberal to be the GOP nominee, "giving Trump some rhetorical cover from a conservative validator in the eyes of many grassroots conservatives."

But some rally-goers at Trump's event Tuesday evening said they weren't sure whether Palin's support would help Trump. Several referenced what many saw as her poor performance as a vice presidential candidate.

Standing in front of a life-size, rifle-toting model of the actor in full cowboy gear, Trump accepted the endorsement of Aissa Wayne at the John Wayne Birthplace Museum in Winterset, Iowa.

"America needs help and we need a strong leader and we need someone like Mr. Trump with leadership qualities, someone with courage, someone that's strong, like John Wayne," she said.