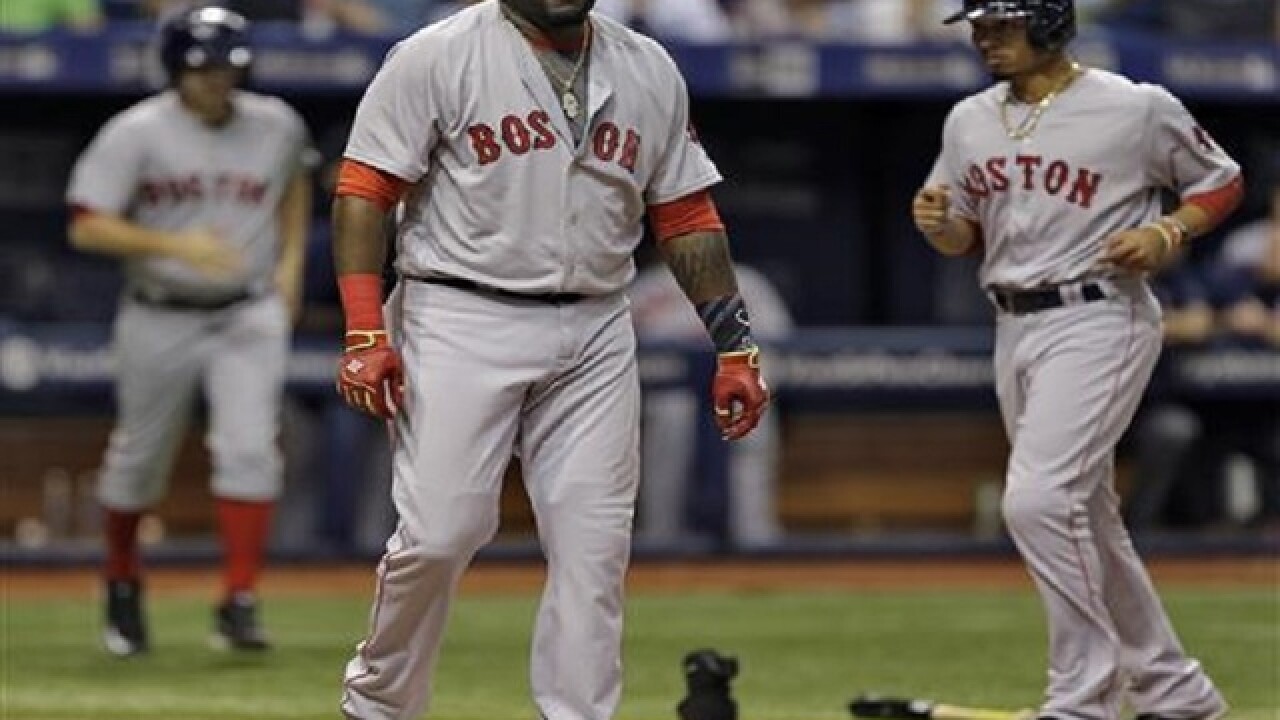 ST. PETERSBURG, Fla. (AP) — Tampa Bay's longest losing streak in seven years is over, thanks to a breakout offensive performance led by Nick Franklin.
The utility infielder had his first three hits of the season and drove in a career-high five runs Monday night, helping the Rays end an 11-game skid with a 13-7 victory over the Boston Red Sox.
"I don't know if it's the start of something, but it's the end of something, for sure," manager Kevin Cash said. "Sometimes it takes that type of performance to break out of a funk."
Franklin, recalled from the minors last week, had a two-run single in the first, a RBI single in the third and a two-run homer in the seventh.
Logan Forsythe and Desmond Jennings also homered in support of rookie left-hander Blake Snell (1-2), who allowed four runs and eight hits over 5 1-3 innings to get his first big league win.
"A lot of questions have to be answered when you're not playing well," Cash said, "and I think they've handled it pretty admirably given what we've gone through."
Tampa Bay's tailspin matched the longest in the majors this season. The 23-year-old Snell became the first AL rookie starter to stop a losing streak of 11 or more games since 2009, when David Price also stopped an 11-game skid for the Rays.
The Red Sox had lost six of eight, including three straight. They held a team meeting after the game, during which manager John Farrell said he told the club it's better than Boston has played lately.
"Absolutely," second baseman Dustin Pedroia said. "I do think we're better than this."
Forsythe finished with three of Tampa Bay's season-best 18 hits, including a two-run homer off Eduardo Rodriguez (1-3) that gave Snell a 9-0 lead in the third inning. Logan Morrison drove in two during a five-run first, and Jennings led off the third with a solo homer.
Rodriguez continued to struggle in his comeback from a stint of the disabled list (right patella subluxation), allowing nine runs and 11 hits in 2 2/3 innings.
"It was disappointing," Farrell said of Rodriguez's outing. "The bottom line is, he's capable of more, we're capable of more. We needed to get better, and we had a chance to share that here after the game. We collectively have to get better."
Boston fans sprinkled throughout an announced crowd of 18,024 cheered sarcastically in the third, when the Red Sox finally had a reliever start warming in the bullpen after Franklin's RBI single increased Tampa Bay's lead to 7-0. Forsythe's homer ended the Boston starter's night, giving Snell a nine-run cushion — though not necessarily an easy path to victory.
Bryce Brentz had a two-run double for Boston in the fourth, and the Red Sox loaded the bases with two outs in the fifth. Snell walked David Ortiz, forcing in a run but escaped further damage by striking out Hanley Ramirez. The young lefty yielded another run in the sixth, exiting after throwing 103 pitches.
Ortiz moved ahead of Hall of Famer Reggie Jackson into sole possession of 24th place on the career RBI list with 1,703. His 168 RBIs against the Rays are the most by any Tampa Bay opponent.
HIT CITY
Evan Longoria, Taylor Motter and Oswaldo Arcia joined Franklin and Forsythe in having three hits each for the Rays. Brentz and Marco Hernandez had three hits for the Red Sox, who finished with 12 overall.
SLOW STARTERS
Red Sox pitchers have a 6.28 ERA in the first inning this season. And in 15 games since June 12, the team has been outscored 22-0 in the first inning.
SHARING BLAME
Tampa Bay president of baseball operations Matt Silverman said before the game that the entire organization — from coaches and players to the front office — shares responsibility for rough stretch that dropped the Rays a season-low 12 games under .500. "We all take great pride in the winning product we've been able to put on the field, and we haven't seen that to date," Silverman said. "We're all looking in the mirror trying to figure out what we can do to improve this, to right the ship, and all ideas are on the table."
UP NEXT
Red Sox: RHP Rick Porcello (8-2, 3.93 ERA) seeks his ninth victory of the season. In addition to being tied for seventh in the AL in victories, he hasn't allowed more than two walks in any of his past 19 starts, the longest such stretch for a Red Sox pitcher since Curt Schilling did it over 33 starts from Sept. 20, 2005 to Sept. 20, 2006.
Rays: RHP Chris Archer (4-10, 4.70) has gone from an All-Star a year ago to leading the majors in losses. He's 1-7 with a 5.67 ERA in 12 career starts against Boston, his most losses against any opponent.
Copyright 2016 The Associated Press. All rights reserved. This material may not be published, broadcast, rewritten or redistributed.