People get ready for heavy snow in East Coast 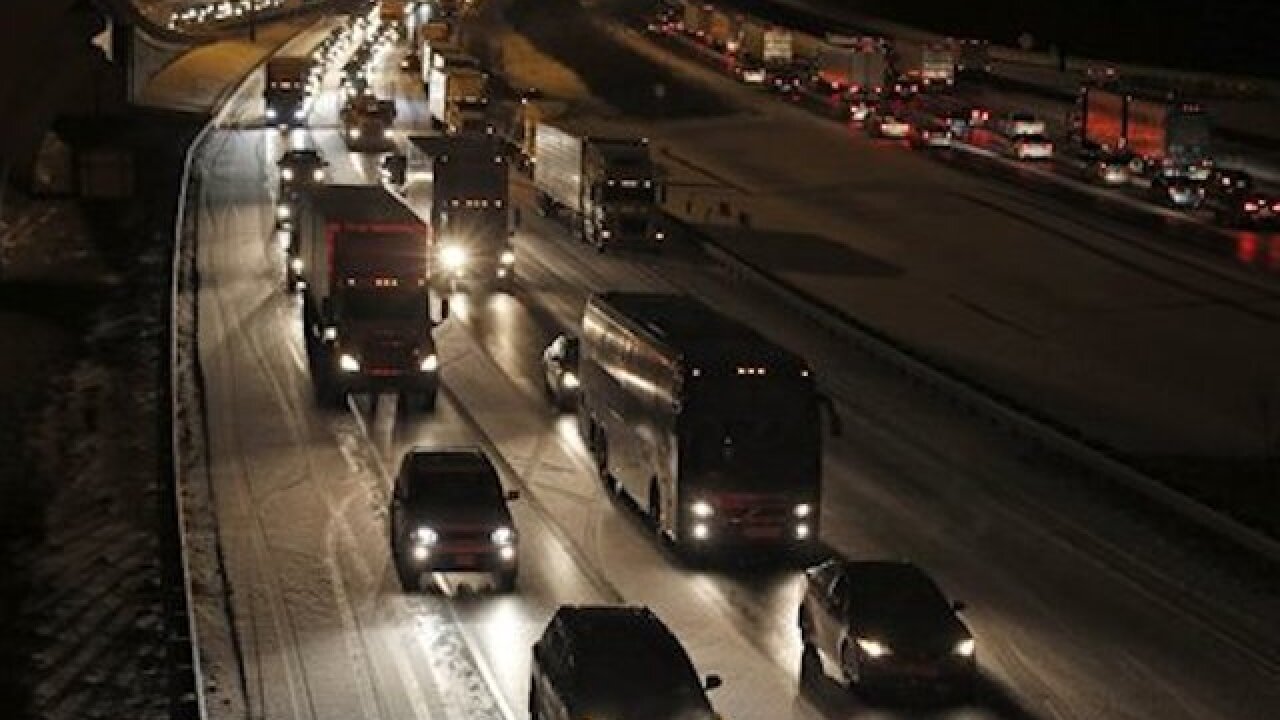 Copyright Associated Press
Alex Brandon
<p>Traffic is bumper to bumper and mostly at a stand-still on the outer loop of the I-495 Capital Beltway after snow fell Wednesday, Jan. 20, 2016, in National Harbor, Md. As Washington prepares for this weekend's snowstorm, now forecast to reach blizzard conditions, a small clipper system pushed through the region Wednesday night causing massive delays and issues on the roads. (AP Photo/Alex Brandon)</p>

WASHINGTON (AP) — Drivers in the Washington area spent hours in icy gridlock ahead of heavy snowfall that's predicted to arrive by the weekend from the Appalachians to Philadelphia and maybe farther north.

Treated roads were clear Thursday morning, but some elevated roads, ramps and side streets were icy with drivers inching along.

In northern Virginia, minor accidents built to gridlock and ramp closures continued through the night, Virginia Department of Transportation spokeswoman Jennifer McCord said. She described, "a long night for a lot of people trying to get home."

With more winter weather approaching, people throughout the region readied themselves for blocked roads, power outages and canceled flights.

The National Weather Service said in a statement Wednesday that 12 to 16 inches of snow could come down between Friday night and Sunday morning around the Interstate 95 corridor. As much as a foot of snow is possible for Philadelphia's northern suburbs.

In the District of Columbia, Mayor Muriel Bowser requested Humvees from the National Guard to reach isolated people and places if necessary.

"If this is a blizzard and we have sustained winds and people lose power, that would be my biggest concern," Bowser said at a news conference. "We can move the snow. We will move the snow."

In the areas where blizzard conditions are possible, the weather service warns that travel will be limited or impossible. The strongest winds and potentially life-threatening conditions are expected Friday night through Saturday night.

On Wednesday, the weather service issued blizzard and winter storm watches for parts of Maryland, Washington, Virginia, West Virginia and Arkansas. The watches start as early as Thursday and stretch into Saturday.

"There's a lot of details that are yet to be seen," Otto said. "Subtle changes can make a big difference. We've seen that in storms in the past."

All major airlines have issued waivers for travel over the weekend, allowing passengers to rebook onto earlier or later flights to avoid the storms. The airports included vary by airline but include some cities in Kentucky, Tennessee and West Virginia all the way up the coast to New Hampshire and Massachusetts.

Snow in much of Kentucky and Tennessee led school districts and some universities to cancel classes Wednesday and contributed to at least one traffic death, and officials warned motorists to be cautious of slick roads.

West Virginia Gov. Earl Ray Tomblin mobilized the West Virginia National Guard to assist in the upcoming storm. The National Weather Service says some areas of the state could get up to 2 feet of snow.

GEARING UP IN PENNSYLVANIA

"At this point, it is all about being prepared," he said.

PennDOT mechanics were busy making sure trucks were cleaned and in good repair so all equipment is ready to go whenever the snow starts falling, spokesman Gene Blaum said.

"We've used virtually no salt," so far this season, he said. "But winter isn't over."

The storm's impact on southern New England remained uncertain Wednesday, but officials were preparing for the worst.

The National Weather Service said there's a potential for 6 inches of snow or more in the region. High winds and coastal flooding are possible.

The storm is expected to miss northern New England. Meteorologist Tom Hawley of the National Weather Service in Gray, Maine, says its path could shift but right now "all indications are that it will not amount to much" in the region.

Organizers of the March for Life say their annual anti-abortion rally in Washington will be held Friday, as scheduled.

The rally on the anniversary of the Supreme Court's Roe v. Wade decision is one of the largest events on the National Mall. Thousands of abortion opponents gather to listen to speeches before marching to the Supreme Court.

While the snow fell, some people made their way to the grocery store to stock up on needed items.

In Louisville, Kentucky, Adrian Gardner packed gallons of milk, laundry detergent and bags of groceries into his SUV. None of it was for him.

Cary Prince of McLean, Virginia, picked up rock salt at the hardware store, but struck out on snow blower fuel, which was sold out. Still, she was stocked up on the key provision, so all was well.