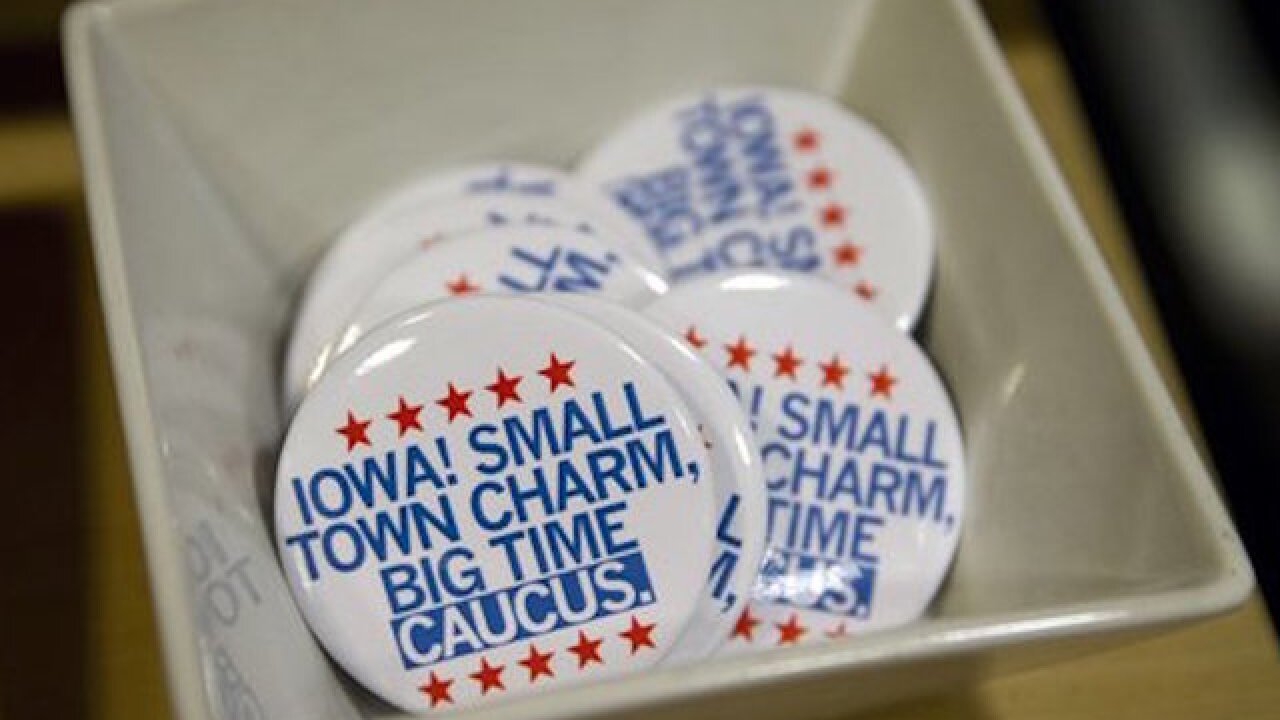 Jae C. Hong
<p>In this Jan. 21, 2016, photo, political buttons are for sale at a gift shop in Des Moines, Iowa. For some Americans, the promise of political change and disruption has come too slowly, or failed altogether. On the eve of the first voting contest in the 2016 presidential election, these voters are pushing for bolder, more uncompromising action, with an intensity that has shaken both the Republican and Democratic establishment. (AP Photo/Jae C. Hong)</p>

As the first presidential primary contest of 2016, Iowa's decision will shape the path of the Republican race. Trump has surged atop national polls with his aggressive populism and packed rallies, while Cruz carved out support in Iowa with his fiery conservatism and methodical outreach. Rubio is working to emerge as the clear favorite in his party's mainstream wing, which fears either Cruz or Trump would be disastrous in a general election matchup against the Democratic nominee.

The results in Iowa may also narrow what has been an unusually crowded Republican field, with a number of candidates struggling to achieve the turnout needed to continue. Trump, Cruz and Rubio were in a tight fight for victory, according to entrance poll interviews conducted by Edison Research for the Associated Press and television networks. The key to winning may depend on tapping into voter frustrations with the federal government. Nine out of 10 Republican voters said they're angry or dissatisfied with Washington.

Davenport's Dwight Reese, 55, had been torn between Trump and Cruz but said before leaving for his caucus site that he'd decided last night to back Cruz "100 percent" since Trump hasn't always held conservative positions.

"I got kind of caught up in the Trump phenomenon," said Reese, who works at an automotive warehouse.

But he said Cruz "stands for everything I believe in. I believe I can trust him."

Likewise, Joshua Eike, 42, had been torn between Trump and Cruz. But the entrepreneur from Yale, Iowa, decided, after some final research on both campaigns' websites, to caucus for the outsider Trump, who has never held elected office.

"He truly is not a standard politician and that's important to me," Eike said.

Monday's contest will offer the first hard evidence of whether Trump can turn the legion of fans drawn to his plainspoken populism into voters. The scope of the billionaire's organization in Iowa is a mystery, though Trump himself has intensified his campaign schedule during the final sprint.

Trump and his wife went to the St. Francis of Assisi Catholic Church in West Des Moines in an unannounced visit to make a final pitch. Trump says he's feeling good about the results.

Cruz has modeled his campaign after past Iowa winners, visiting all of the state's 99 counties and courting influential evangelical and conservative leaders. He has spent the closing days of the Iowa contest attacking Rubio in an effort to keep the Florida senator from inching into second place.

Many Republicans view Rubio as a more mainstream alternative to Trump and Cruz, though his viability will depend on staying competitive in Iowa.

Rubio in recent days lashed back at the many attacks aimed in his direction, but adopted the same reflective tone as many of his rivals in the campaign's final hours, telling NBC that Cruz "has a very strong ground game." He dismissed the attacks against him as "politics as usual."