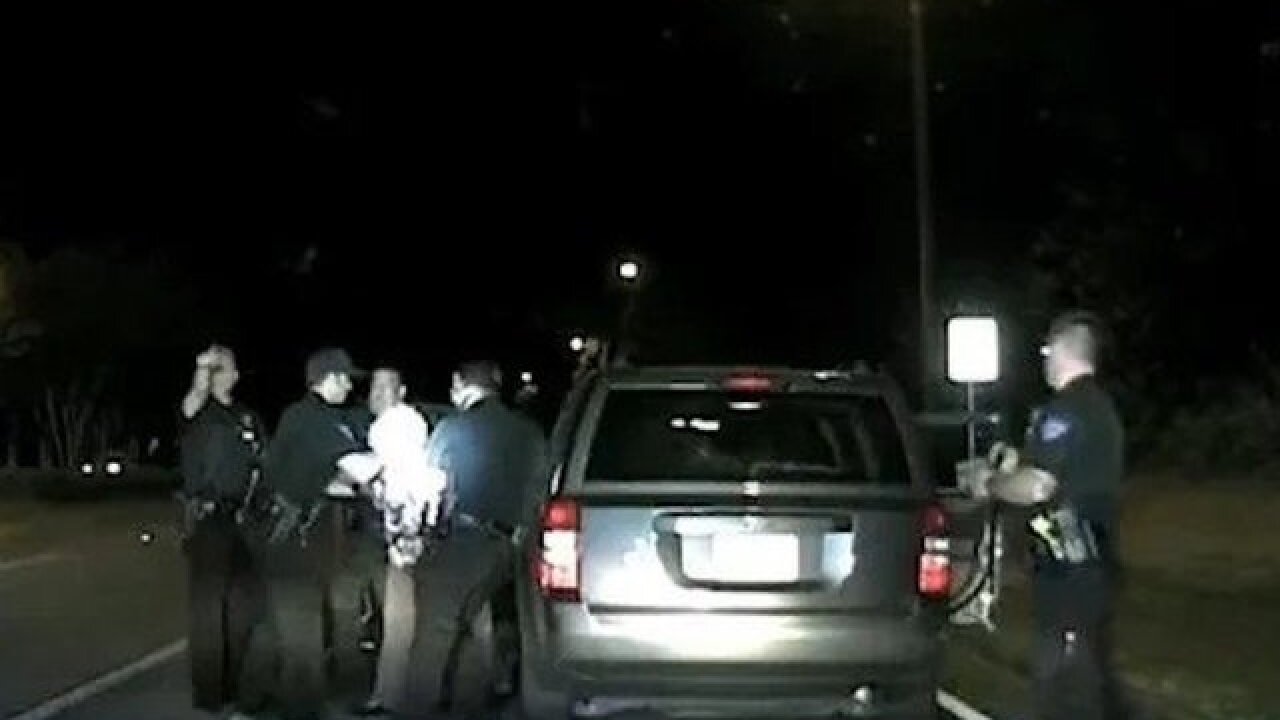 © 2018 Cable News Network, Inc.
Alpharetta Dept of Public Safety
<p>**Embargo: Atlanta, Ga.** An Alpharetta police officer has been suspended after he was caught manhandling a 65-year-old woman on dashcam video.</p>

A suburban Atlanta police officer resigned after his department said he used foul language and inappropriate tactics during the arrest of a 65-year-old grandmother during a traffic stop, recorded on a police dashboard camera.

Alpharetta Officer James Legg had been called in as backup during a May 4 traffic stop because the Lyft driver would not sign a ticket and refused another officer's order to get out of her car, officials said.

In a letter to Alpharetta Public Safety Director John Robison released Friday, Legg said he felt he behaved appropriately and followed his training.

"I judged her actions to be passive resistance and used very limited force to end a multiple minute encounter with the suspect," he said. "Maybe I should not have used profanity, but its immediate effectiveness is not questionable and I do believe I acted reasonably under the circumstances."

Dashcam video showed Legg pointing at the driver and shouting, "You're not in charge. Shut the f---- up and get out of the car."

When the woman got out of the car, Legg yanked her arm. She was screaming as officers put her hands behind her back and handcuffed her.

Earlier, Robison had posted a video on the department's Facebook page saying that he had launched an internal affairs investigation.

The official did not name Legg in the post, but said the officer "interjected himself into the situation using language and tactics that were inappropriate, even inflammatory."

Legg had been suspended, pending the investigation, but said he did not think he would be treated fairly.

"I do not feel I will get a fair internal affairs investigation from you due to the comments you made on Facebook prior to interviewing any of the other officers, or even me," he wrote to Robison. "Rather than let an independent agency or officer review my performance, you have all but issued a statement finding my actions unworthy, unreasonable, and in violation of policy."

Police said the situation began when another officer pulled the woman over because she had drifted out of her lane during a turn. He said she nearly caused an accident. The driver would not sign the ticket and said she wanted to speak to a supervisor. On camera, she can be heard refusing to exit the vehicle, or sign the ticket, until a supervisor could arrive on scene.

That officer reached into the car to open the door and repeatedly told her to step out of the car.

Police said that the woman tried to close the car door and hit the officer.

He then reached into the car to pull her out of the vehicle and told her she was under arrest for disorderly conduct.

The woman screamed, "This is a violation of my rights" and later said, "If you break my arm, we will have a problem.

When backup arrived, a second officer tried to help pull her out of the vehicle.

Neither of these officers have been identified.

In the video, Legg started shouting at the woman just after she agreed to get out of the car. In his letter, Legg said he stepped in because other officers were unable to complete the arrest and his language got the woman out of the car.

CNN has not been able to contact the woman, but affiliate WSB identifies her as Rose Campbell, a 65-year-old grandmother.

"I'm going to be honest with you I felt violated," Campbell told WSB. "I felt not only that my space had been violated, but that he was not respecting me."

Campbell's attorney, Mutepe Akemon, said his client pleaded guilty to disorderly conduct. But Akemon said he will work to get that charge dropped.

An allegation of improper lane change was dismissed, Akemon said.

Campbell was carrying a passenger at the time of the incident.

Lyft said the way Campbell was treated was unacceptable. "What happened to Ms. Campbell occurs all too often to black Americans who are frequent victims of racial profiling," spokesperson Alexandra LaManna said.

Robison said that he would continue to investigate the incident and has asked the Georgia Bureau of Investigation to conduct a separate, independent probe.