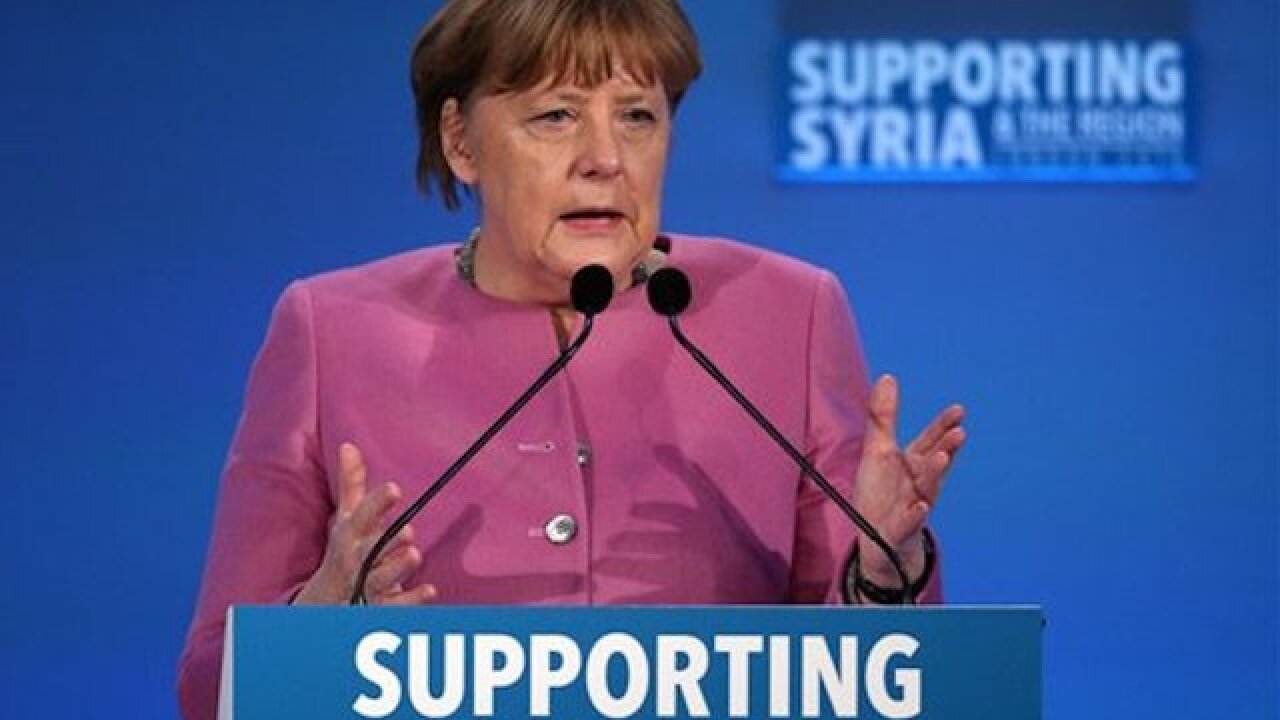 Copyright Associated Press
Dan Kitwood
<p>German Chancellor Angela Merkel speaks at the 'Supporting Syria and the Region' conference at the Queen Elizabeth II Conference Centre in London, Thursday, Feb. 4, 2016. Leaders and diplomats from 70 countries are meeting in London Thursday to pledge billions to help millions of Syrians displaced by war, and try to slow the chaotic exodus of refugees to Europe. (Dan Kiktwood Pool via AP)</p>

DAMASCUS, Syria (AP) — German Chancellor Angela Merkel on Wednesday reiterated her proposal for a no-fly zone in Syria where civilians would be protected, a suggestion that was promptly rebuffed by Moscow, which said it can only be done with the Syrian government's consent.

In Damascus, over 100 trucks loaded with humanitarian aid were expected to head out to five besieged areas in in the country, part of an effort described by a Russian official as a first step toward implementation of an agreement reached among world powers in Munich last week.

U.N. envoy Staffan de Mistura has been trying to secure aid deliveries to improve the chances of restarting peace talks before the end of February. But those efforts have been clouded by the intense fighting north of Aleppo, where various forces backed by regional and international rivals are clashing over a crucial strip of land linking Syria's largest city to the border with Turkey.

The violence in Aleppo and lack of improvement on the humanitarian front led to the collapse of indirect talks between the Syrian government and its opponents in Geneva earlier this month.

It appears also to have revived a long-standing proposal to establish a no-fly zone in northern Syria — an idea that has been repeatedly floated by Turkey and other opponents of Syrian President Bashar Assad throughout the five-year-old war.

A no-fly zone would potentially create a safe haven for tens of thousands of displaced Syrians. But Washington has long rejected the idea, fearing it would draw U.S. forces further into the civil war.

Merkel expressed support for the idea on Tuesday, and repeated it again on Wednesday. She said it could be done by agreement between Assad, his backers and the coalition fighting the Islamic State group.

At a news conference, she said such an agreement would be "a sign of good will" and would put many people at ease.

The U.S., Russia and other world powers agreed last week on ceasing hostilities within a week, the delivery of urgently needed aid to besieged areas of Syria and a call to return to peace talks in Geneva.

Gatilov said that "the implementation of the Munich agreements on Syrian settlement has started."

He said a working group on humanitarian access to the besieged areas has met and is set to again meet Thursday. He said it will discuss practical issues related to the aid delivery.

"It's important that the Syrian government has officially declared that it would provide access to seven besieged cities," Gatilov said, according to Interfax.

In Damascus on Tuesday, de Mistura suggested that humanitarian aid would be allowed into several besieged areas Wednesday, calling it the "duty of the government of Syria."

"Tomorrow we test this," he said after meeting with Syria's foreign minister. The U.N. later said the Syrian government has approved access to seven such areas across the country and that convoys would head out in the coming days.

The Syrian foreign ministry hit back Wednesday, saying "we do not wait for anyone to remind us of our duties toward our people."

"In fact, the Syrian government is the one that needs to test the credibility of the U.N. envoy," a statement said.

Still, the convoys appeared to be preparing to head to besieged areas Wednesday. At least 16 trucks were parked on the side of the highway at the entrance to Damascus, waiting to leave for the besieged rebel-held towns of Madaya, Zabadani and Moadamiyeh near the capital.

According to the agreement, aid would simultaneously be delivered to two communities in the northern Idlib province that are besieged by rebels.

The U.N. estimates that 18 Syrian communities are besieged, affecting around half a million people.