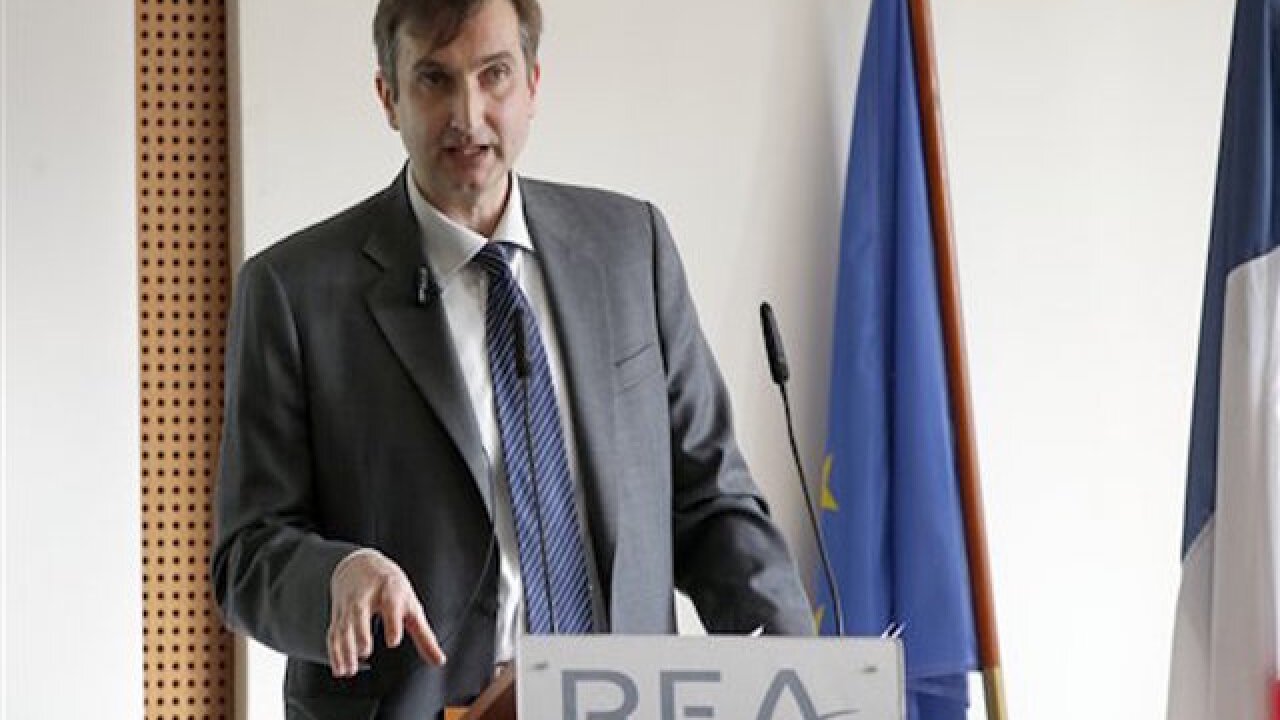 Christophe Ena
<p>Arnaud Desjardin, deputy head of the investigations department of BEA, the French Air Accident Investigation Agency, delivers a speech during a press conference at Le Bourget airport, north of Paris, Sunday, March 13, 2016. Germanwings co-pilot Andreas Lubitz had been treated for depression in the past, and the investigation found that he had consulted dozens of doctors in the weeks before he deliberately crashed a jet into the French Alps on March 24, 2015, killing all 150 people on board. (AP Photo/Christophe Ena)</p>

The French investigation found that Germanwings co-pilot Andreas Lubitz, who had been treated for depression in the past, had consulted with dozens of doctors in the weeks before he deliberately crashed a jet into the French Alps on March 24, 2015, killing all 150 people on board.

But none of the doctors told authorities of any concerns about Lubitz's mental health, France's BEA air accident investigation agency said, including one who referred Lubitz to a psychiatric clinic just two weeks before the crash.

"Experts found that the symptoms (two weeks before the crash) could be compatible with a psychotic episode," said Arnaud Desjardin, leader of the BEA investigation. This information "was not delivered to Germanwings."

Because Lubitz didn't inform anyone of his doctors' warnings, the BEA said in a statement, "no action could have been taken by the authorities or his employer to prevent him from flying."

The agency also said Lubitz was using antidepressants at the time of the crash. It said traces of anti-depressive medications Citalopram and Mirtazapine were found in Lubitz's remains, as well as the sleeping medication Zopiclone.

The U.S. National Library of Medicine notes on its entry for Citalopram that children and young adults who take the drug can become suicidal "especially at the beginning of your treatment and any time that your dose is increased or decreased."

Lubitz was 27 when he crashed the plane.

Germanwings and its parent company Lufthansa have strongly denied any wrongdoing in the crash, insisting that Lubitz was certified fit to fly.

But relatives of those killed have pointed to a string of people they say could have raised the alarm and stopped Lubitz, going back to the days when he began training as a pilot in 2008.

The BEA investigation is separate from a manslaughter investigation by French prosecutors seeking to determine eventual criminal responsibility for the crash of Flight 9525 from Barcelona to Duesseldorf. The focus of the BEA report was recommendations to avoid such events in the future.

The agency found that the certification process failed to identify the risks presented by Lubitz. It said one factor leading to the crash might have been a "lack of clear guidelines in German regulations on when a threat to public safety outweighs" patient privacy.

Germany's confidentiality laws prevent sensitive personal information from being widely shared, though doctors are allowed to suspend patient privacy if they believe there is a concrete danger to the person's safety or that of others.

Desjardin described Germany's privacy rules as being especially strict, and said doctors fear losing their jobs or potential prison terms if they unnecessarily report a problem to authorities. The doctors who treated Lubitz for depression and mental illness refused to speak with the BEA investigators, according to victims' relatives who were briefed on the report.

"That's why I think clearer rules are needed to preserve public security," Desjardin told reporters at a press conference in Le Bourget, in the Paris suburbs.

But Johann Reuss of Germany's air accident investigation agency told The Associated Press "there is no need to change the law." Reuss said "it might not be easy" to loosen the privacy rules and suggested that authorities instead focus on giving doctors checklists to prevent similar scenarios with pilots.

The new BEA safety recommendations also included peer support groups for aviation workers and other measures to reduce the stigma and fear of losing a job that many pilots face for mental health issues.

"The reluctance of pilots to declare their problems and seek medical assistance ... needs to be addressed," the BEA said.

Lufthansa pledged to back the new safety recommendations, saying in a brief statement Sunday that it will "continue to cooperate with the relevant authorities and will support the possible implementation of concrete measures" based on the report.

Half an hour into the Germanwings flight, Capt. Patrick Sondenheimer handed the controls to Lubitz and went to the restroom. When he returned, Sondenheimer found the cockpit locked from the inside. Lubitz, had disabled the safety code that would have allowed the pilot to open the door.

Shortly afterward, the Airbus A320 hit the ground near the French village of Le Vernet.

Lubitz had previously been treated for depression and suicidal tendencies, and documents seized by prosecutors show he partly hid his medical history from employers.

Lubitz had interrupted his Lufthansa training for several months due to psychological problems. He was allowed to return in 2009, having received the "all clear" from his doctors — though his aviation record now contained the note "SIC" meaning "specific regular examination."

Lufthansa said after the crash that it was aware of Lubitz's depressive episode, but Germanwings, which he joined in 2013, said it had no knowledge of his illness.

The French investigators decided that systematic, deep psychological tests every year for all pilots would be "neither effective nor beneficial," Desjardin said.

Instead, the BEA recommended tougher monitoring of pilots who had mental health issues in the past.

The agency also said airplane cockpit security rules shouldn't be changed, because it was still very important to protect the cockpit from outside attackers. Current cockpits are equipped with a code system to prevent the kind of hijackings that occurred on Sept. 11, 2001, in the United States, where planes full of passengers were turned into weapons.

"A lockage system cannot be created to prevent threats coming from (both) outside and inside the cockpit," Desjardin said.

After the Germanwings crash, some airlines and aviation regulators required that at least two people be in the cockpit at any given time to prevent such crashes.

Many of the relatives of the Germanwings victims were still upset after hearing about the report Saturday.

"People were not happy at all with some of the explanations. Some of the family members felt as if these BEA representatives were Lubitz' lawyers — making excuses as to why Germanwings didn't take action knowing what they knew," Robert Tansill Oliver, whose son died in the crash, told The Associated Press.

"How is it possible Germanwings would let a crazy guy fly a plane? He was mentally unbalanced, tremendously unbalanced," Oliver said.

Since the crash, the airline has replaced its Germanwings brand with the name Eurowings.