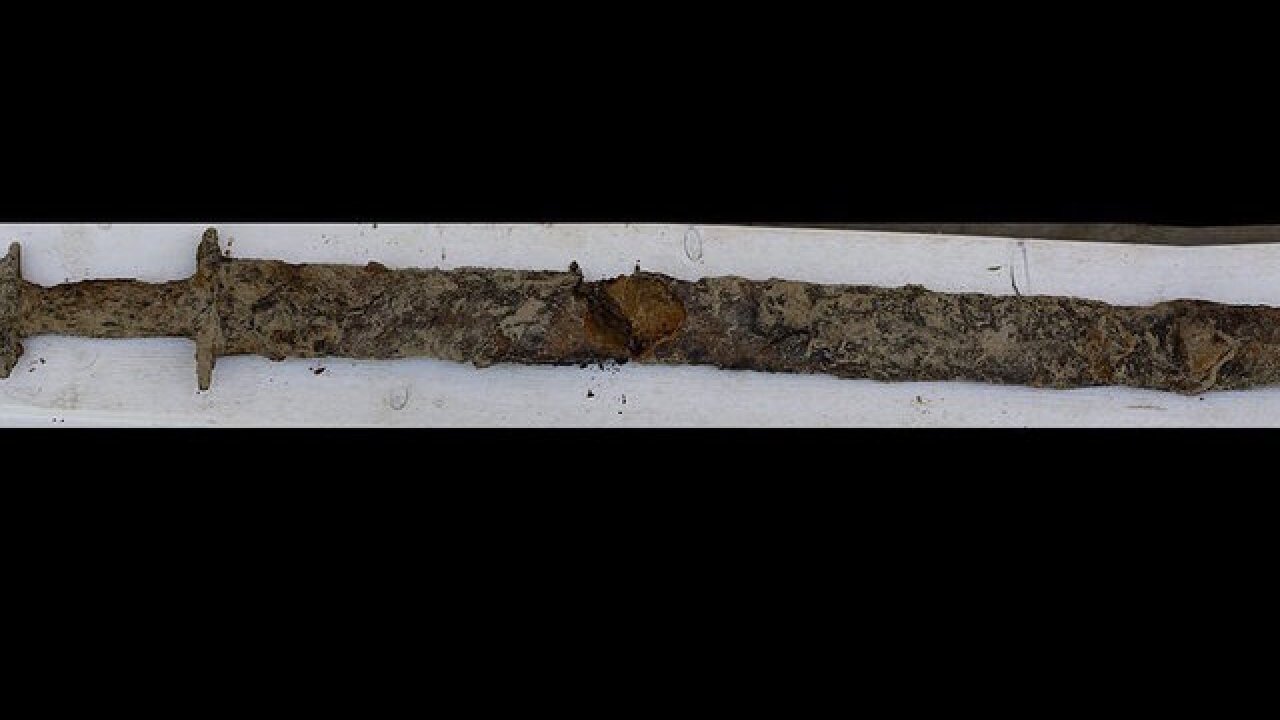 Copyright 2018 Scripps Media, Inc. All rights reserved. This material may not be published, broadcast, rewritten, or redistributed.
Jonkopings Lans Museum
<p>An eight-year-old girl has discovered a pre-Viking-era sword in a Swedish lake, prompting locals to name her the "Queen of Sweden."</p>

An eight-year-old girl has discovered a pre-Viking-era sword in a Swedish lake, prompting locals to name her the "Queen of Sweden."

Swedish-American Saga Vanecek found the ancient artifact while playing in Vidöstern lake during the summer near her family's holiday home in the south of the country.

Experts at a local museum estimate the sword to be around 1,500 years old, according to local reports.

"I was outside in the water, throwing sticks and stones and stuff to see how far they skip, and then I found some kind of stick," Vanecek told The Local, a Swedish news website.

"I picked it up and was going to drop it back in the water, but it had a handle, and I saw that it was a little bit pointy at the end and all rusty. I held it up in the air and I said 'Daddy, I found a sword!' When he saw that it bent and was rusty, he came running up and took it," she continued.

The report added that locals joked that the discovery made his daughter the new "Queen of Sweden," drawing parallels with legend of King Arthur who was bequeathed a right to rule after being handed the Excalibur sword by the Lady of the Lake.

Mikael Nordström, an expert from the Jonkopings Lans Museum, described the discovery of the relic as spectacular, saying that it was "about 85 centimeters long, and there is also preserved wood and metal around it."

"We are very keen to see the conservation staff do their work and see more of the details of the sword," he was quoted as saying in the report.

Her father, Andy Vanecek, said in a Facebook post that the Iron Age sword was found complete with its scabbard, made of wood and leather, and that it is "the first sword of its kind to ever be found in Scandinavia."

He described the moment in July when his daughter "stumbled upon something special in the muddy clay."

"She picked up the object, lifted it high above her head, and shouted as if she was Pippi Longstocking," he said.

Andy Vanecek's home state is Minnesota, but the family moved to Sweden last year from Minneapolis because they wanted to be closer to his wife's relations, the report said.

He was particularly happy about the find, he said, because "I'm a huge Minnesota Vikings fan, and this looks just like a Viking sword!"

Nordström said archaeologists had since searched the lake again, finding a prehistoric brooch from around the same period as the sword. Experts first thought the area was a grave site, but now believe it may have been a place of sacrifice.