GoFundMe to help Kanye West get out of $53M debt 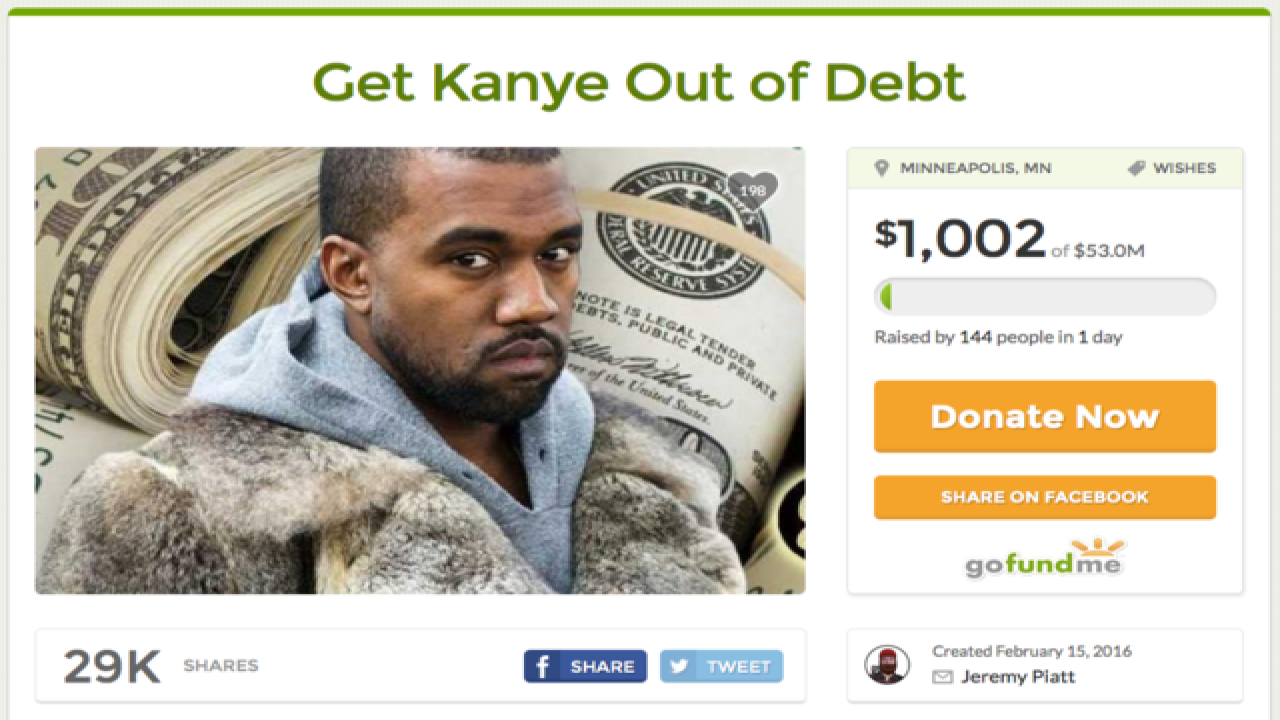 A GoFundMe page has raised more than $1,000 for struggling hip hop artists Kanye West. What’s unclear is whether the page is serious or not.

West recently took to Twitter to tell everyone he is $53 million in debt and to ask Facebook CEO Mark Zuckerberg to invest “1 billion dollars into Kanye West ideas” … “after realizing he is the greatest living artist and greatest artist of all time.” The GoFundMe page says, “We must open our hearts and wallets for Kanye today. Sure he is personally rich and can buy furs and houses for his family, but without our help, the true genius of Kanye West can’t be realized.”

But the comments left on the page – even from those donating $5 to West – make it clear there isn’t a lot of sympathy for the celebrity.

“I donate negative 54 million dollars. Maybe his clothing line should not have looked like the bums in Compton designed them. How about we raise money to feed starving children here in America?? Hmmm.. What a thought.,” wrote Laurie Sanford.

Winne Sanderson wrote, “How about you get a job? After all, your pathetic attempts at 'music' suck. And as for your clothes, I've seen better style on a bag lady. Or maybe your slut wife can release a few more sex tapes.”

Many people donating money are using the GoFundMe page’s popularity for their own self-promotion, like Michael Fox, who wrote, “I hope this money doesn't actually go to Kanye... Buy some fresh roasted coffee from Blackbeard Coffee Roasters! www.blackbeardroasters.com.”

While Aplifi Commerce wrote, “I do not support Kanye, but I couldn't pass on the opportunity to advertise. Our company does digital transformation for major brands. Kanye, if you wanted to sell more online, we could help, just expect us to charge you more than other customers. Call it the Kanye tax.”