Trump stands by his campaign rhetoric 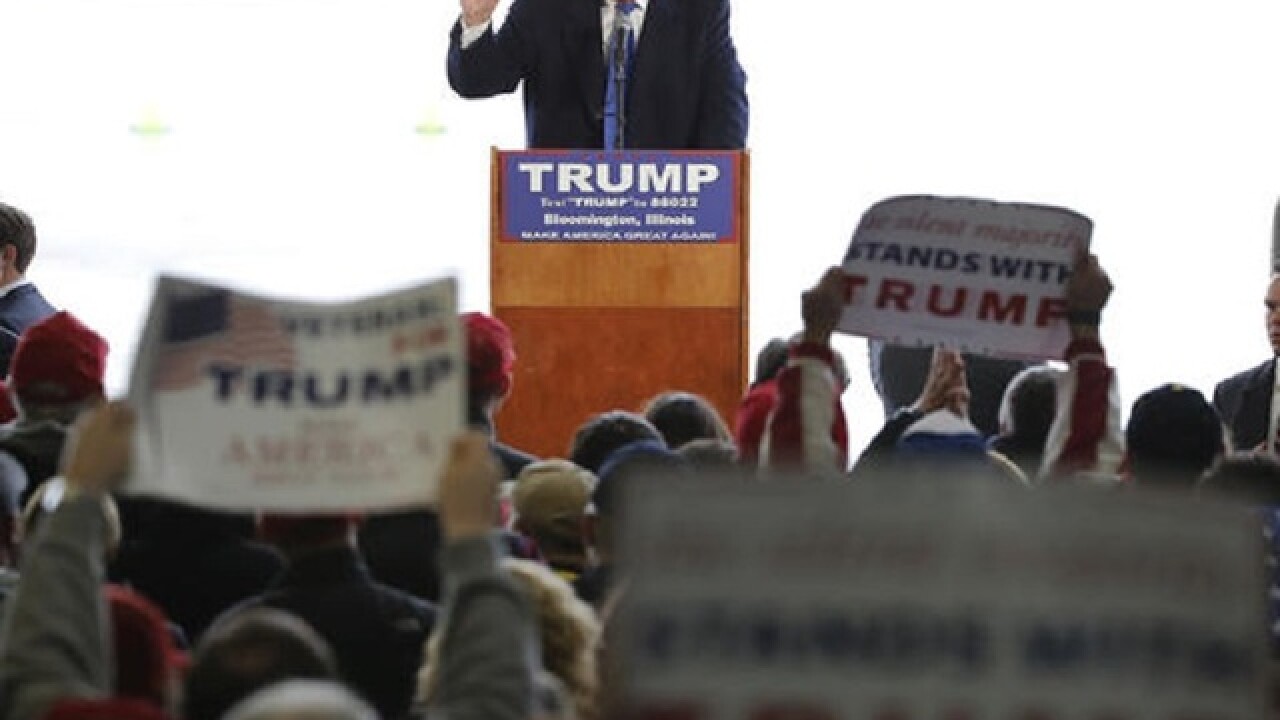 BLOOMINGTON, Ill. (AP) — Showing few signs of trying to ease the nation's tense political atmosphere, Republican front-runner Donald Trump is standing by his antagonistic campaign rhetoric, rejecting any responsibility for violence at his rallies and defending his supporters who have been charged with assaulting protesters.
"We're not provoking. We want peace. ... We don't want trouble," he told a large crowd in Bloomington, Illinois, the first of two comparatively docile events Sunday as he campaigns ahead of another critical slate of large-state primaries.
Trump's remarks come after a near-riot Friday night in Chicago as Trump canceled a scheduled rally amid widespread altercations among his supporters, detractors and authorities.
His three-state schedule, which ends Sunday evening in Florida, also comes less than 48 hours before polls open in a five-state slate that could determine whether he wins the GOP nomination without a contested summer convention.
Against that backdrop, Trump continued to blame protesters, media and even Democratic presidential hopeful Bernie Sanders for the increasingly caustic campaign environment that his rivals assailed as "cause for pause" and certain "to do damage to America."
Interrupted only sparingly in Illinois, Trump assured his backers their frustration is righteous rage against a corrupt political and economic system. He cast his naysayers as "bad people" that "do harm to the country."
He's tried since Chicago to shift focus to Ohio, where he faces a late push from the popular governor, John Kasich. The outcome will help determine whether Trump can reach the 1,237 delegates required for nomination and avoid a contested GOP convention this summer in Cleveland.
"If we can win Ohio, we're going to run the table, folks," Trump said in West Chester, Ohio, his second event Sunday.
At an earlier stop this weekend, Trump aimed directly at Kasich, calling him "a baby" and deliberately mispronouncing the governor's Czech surname.
"He's not the right guy to be president. He's not tough enough, he's not sharp enough," Trump said at an event outside Dayton.
In line with his protectionist economic pitch, Trump noted Kasich's support for the North American Free Trade Agreement as a member of Congress in the 1990s.
He went on to incorrectly identify the governor as KASE-itch. "Like, most people don't even know how to pronounce his name. Kase-ick! Kase-ick!" Trump mocked. "He cannot do the job, folks. He's not your president."
Kasich, meanwhile, reversed his months-long practice of avoiding the topic of Trump.
Speaking with The Associated Press aboard his campaign bus between stops in Ohio, Kasich brandished his iPad and read a list of Trump quotes compiled by an aide.
The quotes included Trump's comments that his audiences should "hit back" a little more and a statement that he'd like to punch a protester in the face. In all, he read roughly a dozen quotes.
"I never really had looked through those quotes," he said. "It's really cause for pause."
Kasich says the "toxic" tone Trump has created makes it even more important for him to win Ohio, adding of Trump, "this is not what Ohio goes for."
Later Sunday, Kasich told a crowd in Hanoverton, Ohio, without mentioning Trump: "Do we go to the dark side, with negativity, the gnashing of teeth, the division of people? Or do we go to the hopeful and the light side?"
Trump's events unquestionably have become increasingly tense over the course of his campaign, and the candidate has frequently called for aggressive tactics against protesters.
Besides the quotes Kasich noted, Trump often declares the country must "toughen up," and suggested one man who was physically assaulted at a November rally deserved the treatment. He confirmed earlier Sunday that he was considering paying the legal fee of a North Carolina man charged with assault after video captured him sucker-punching a protester at a March 9 rally in Fayetteville, North Carolina.
He began this weekend blaming protesters on Sanders, saying the Vermont senator's campaign organizes "disrupters" at Trump events.
Indeed, some protesters at Trump events are seen carrying Sanders' campaign signs, but Sanders scoffed Sunday at the notion that he's responsible.
"To suggest that our campaign is telling people to disrupt his campaign is a lie," Sanders said Sunday on CBS' "Face the Nation."
Trump wrote on Twitter and suggested again on the Sunday talk show circuit he would urge his backers to protest Sanders rallies. Sanders' official Twitter account retorted: "Send them. They deserve to see what a real honest politician sounds like."
Sanders said on CNN that Trump "is a man who keeps implying violence, and then you end up getting what you see."
Trump counters that he's due credit for canceling the Friday rally and avoiding a worse outcome. Still, he claimed incorrectly that "nobody gets hurt" at his rallies, despite multiple videos showing protesters pushed, punched and bullied at his events.
The remaining Republican hopefuls piled on Trump, as well.
Texas Sen. Ted Cruz, Trump's closest competitor in delegate count, was careful to criticize protesters for their methods, but said Trump encourages an essentially un-American atmosphere.
"I'm troubled by the rallies that Donald holds, where he asks all the people there to raise their hand and pledge their support to him," Cruz said on NBC's "Meet the Press," continuing, "This is America. We don't pledge allegiance to a man. We pledge allegiance to a flag."
A distant third in delegates, Rubio compared Trump to third-world "strong men," and said the tone of the campaign "is really going to do damage to America."
The senator has gone so far as to say his supporters in Ohio should vote for Kasich to help derail Trump. Kasich has not returned the favor.
Associated Press 2016