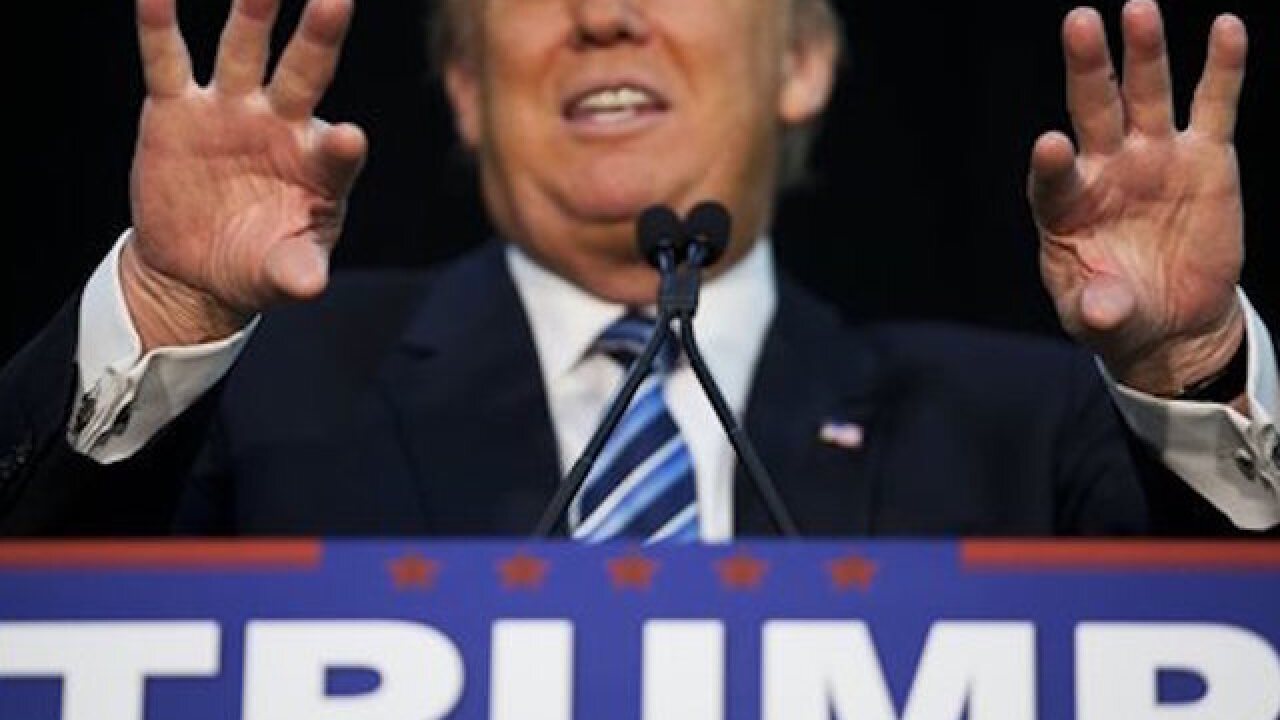 David Goldman
<p>FILE - In a Sunday, Feb. 7, 2016 file photo, Republican presidential candidate Donald Trump speaks during a campaign event at Plymouth State University, in Plymouth, N.H. Trump has given a list of reasons for his second-place finish in the Iowa caucuses, including a failure to invest in boosting voter-turnout and claiming that Ted Cruz ìstoleî the win. But with voting fast approaching in New Hampshire, data from political advertising tracker Kantar Media reveal another possible explanation: Trump got pummeled on TV political-advertising. (AP Photo/David Goldman, File)</p>

With less than a week to go before South Carolina's Republican primary, the GOP front-runner also reiterated that the 9/11 attacks happened during President George W. Bush's time in office — an apparent attempt to overshadow the former president's Monday campaign appearances on behalf of his brother, Jeb Bush.

Trump focused much of his criticism at Cruz, however.

"If he doesn't take down his false ads and retract his lies," Trump said in a statement bashing Cruz, he will immediately file a lawsuit challenging Cruz's eligibility to serve as president.

Trump has previously said a federal court should decide whether Cruz meets the constitutional requirement of being a "natural-born citizen" to serve as president. Cruz was born in Canada to an American mother, and legal experts have said he meets that test.

The statement took issue with Cruz's recent suggestions that Trump would appoint liberal judges to serve on the Supreme Court, is opposed to abortion rights and would undermine the Second Amendment.

"Ted Cruz is a totally unstable individual. He is the single biggest liar I've ever come across, in politics or otherwise, and I have seen some of the best of them. His statements are totally untrue and completely outrageous," Trump said in the statement.

At events in the Charleston area, Trump piled on, slamming Cruz as "the most dishonest guy I think I've ever met in politics," ''an unstable person" and a "basket case."

"He goes around saying he's a Christian. I don't know, you're going to have to really study that," Trump said.

Cruz responded to Trump during a question-and-answer session following an appearance at a gallery in Camden, characterizing Trump as nervous about his standing in the state.

"Today Donald Trump held a press conference. He apparently lost it. I mean, he was just going on and on about how I was the most horrible person in the world because I keep repeating the things he said," Cruz said to laughs. "And it's an amazing thing. Have you noticed how rattled Donald gets when his numbers start going down? He gets very, very upset.

"But I guess the only explanation one can have is his internal poll numbers in South Carolina must be plummeting following the debate," Cruz said.

During a Monday afternoon news conference, Trump also renewed his criticism of former President George W. Bush. While Trump would not say whether he considered Bush to be a failed president or label him responsible for the 9/11 attacks, the former reality TV star repeatedly noted that "the Word Trade Center came down during the reign of George Bush."

Trump said his decision to go after George W. Bush — who made a pair of campaign stops on his brother's behalf on Monday in South Carolina — was akin to his attacks on former President Bill Clinton, which began once the former president ramped up his campaigning for his wife, Democratic candidate Hillary Clinton.

"If the ex-president is campaigning for his brother, I think he's probably open to great scrutiny, maybe things that haven't been thought of in the past," Trump told reporters.

As for the timing of his press conference, Trump said it had nothing to do with Bush. "Say hello to him for me," he told a reporter who noted Bush would soon be appearing nearby. "Give him my warmest regards."

As for whether his increasingly caustic attacks might harm his standing among voters in South Carolina, where the former president remains a popular figure, Trump offered three words: "So am I."