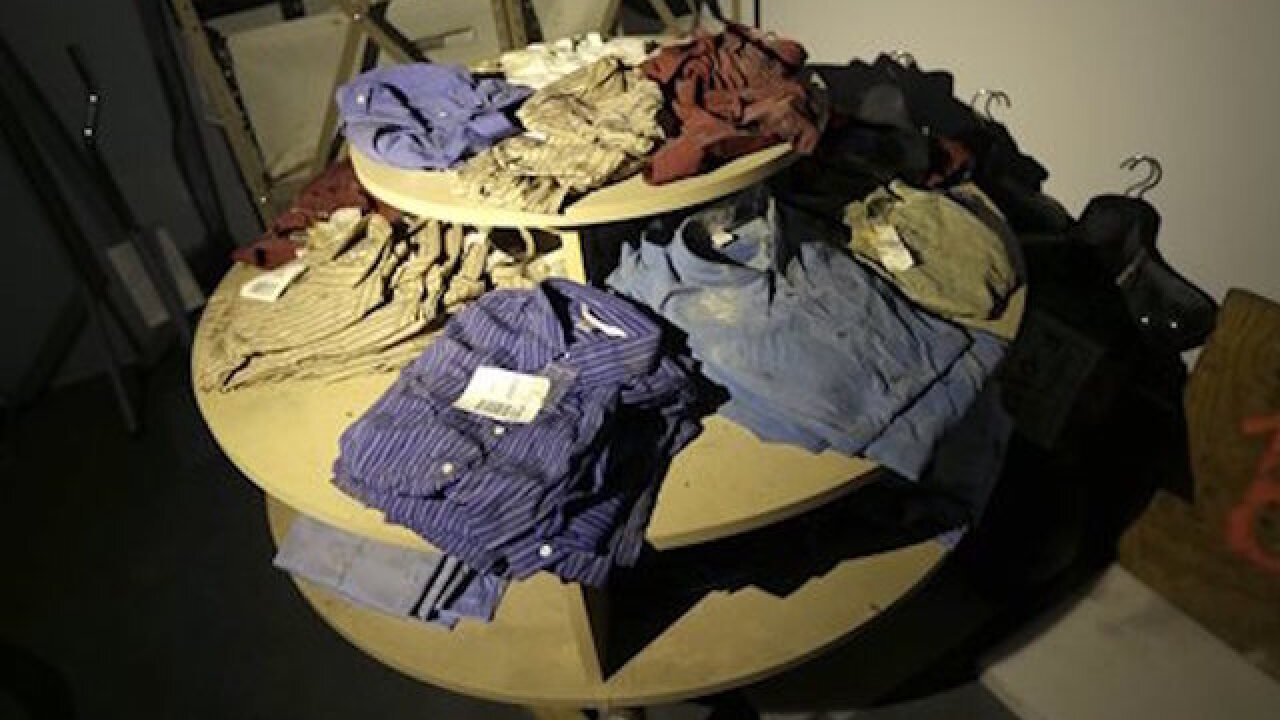 Copyright Associated Press
Seth Wenig
<p>A display of clothes that was recovered from the wreckage of the World Trade Center is stored in a hanger of John F. Kennedy International Airport in New York, Tuesday, Dec. 15, 2015. The pieces are some of the last remnants of a host of artifacts recovered after the Sept. 11 attacks that have been held in storage at the airport for 14 years by the Port Authority of New York and New Jersey, which owns the 16-acre trade center site. (AP Photo/Seth Wenig)</p>

NEW YORK (AP) — Inside an aircraft hangar at Kennedy Airport, stacks of shirts sit neatly folded on a shelf, price tags still attached. But they are caked in dust and will never be sold. Mannequins, dressed in Victoria's Secret tops, stand as if beckoning to shoppers long gone.

Nearby are mammoth hunks of rusty metal and wiring — parts of a global broadcast antenna that once crowned the World Trade Center.

These are some of the last remnants of a host of artifacts recovered after the Sept. 11 attacks that have been held in storage at the airport for 14 years by the Port Authority of New York and New Jersey, which owns the 16-acre trade center site.

The agency is now giving away about 200 items still stored in the 80,000-square-foot hangar. It once held more than 2,000 artifacts from the ruins, which have been distributed over the years to organizations in the United States and abroad.

On Tuesday, the damaged carriage of a PATH train that once carried commuters from New Jersey to the trade center site was lifted onto a flatbed truck by two big cranes. It was headed to the Trolley Museum of New York in Kingston, about 90 miles up the Hudson from New York City, where it will be the centerpiece of a future Sept. 11 wing.

"When I first saw it in the hangar behind us, it felt like I was opening a tomb; it was very emotional for me, I got goose bumps and I had to hold back the tears," museum director Erik Garces said. He spent a week after 9/11 as a city transit employee digging for human remains in the smoking, fiery debris left by the two terrorist-piloted jets.

With planes roaring overhead, he stood watching PATH Train Car No. 143 rolling away — only slightly damaged by the debris of the collapsing towers that penetrated the PATH station tunnel. Of the seven cars on the train, four were crushed. The other surviving car went to the Connecticut Trolley Museum.

The one leaving the hangar, bearing the marks of 3 feet of Hudson River water that flooded the tunnel, "was preserved as it was that morning," Garces said. Complete with the original 2001 ads, he said, "it's a touchstone to the past, it's more than just a relic: When something is really tactile, it brings back emotions and memories that aren't necessarily stirred by just a video or reading a passage in a magazine."

About 200 haunting reminders of the world's worst terrorist attack remain in Hangar 17, in a remote, cargo section of the airport.

The hangar was dubbed "The Tomb of the Unknowns," since none of the initial thousands of items were victims' personal belongings, which were returned to families if possible. Those never claimed are being held by the New York Police Department.

Hangar 17 holds what was left from the heaps of rubble where more than 2,700 people took their last breaths: mangled police cars, a piece of concrete from a World Trade Center garage, an elevator motor and part of a steel beam from which workers cut out crosses and Stars of David. But perhaps the eeriest items are those from ordinary, daily life, frozen forever on 9/11: goods excavated from shops in the underground World Trade Center concourse, including clothing, costume jewelry, a cigarette display case and a sweater sale sign.

The last Port Authority remnants will be distributed to various organizations, on condition they be accessible to the public. The hangar is to be demolished sometime in the future, said Port Authority spokesman Steve Coleman.

On Tuesday, a 32-foot-tall, 36,000-pound antenna section from the north tower was hoisted onto another truck — a blackened, twisted, wire-strung hulk resembling some prehistoric dragon skeleton. It's going to the Fulton Montgomery Community College in Johnstown, New York, as part of an outdoor garden.

Draping the load strapped to the truck was a banner that read: "WTC 9/11 NEVER FORGET."