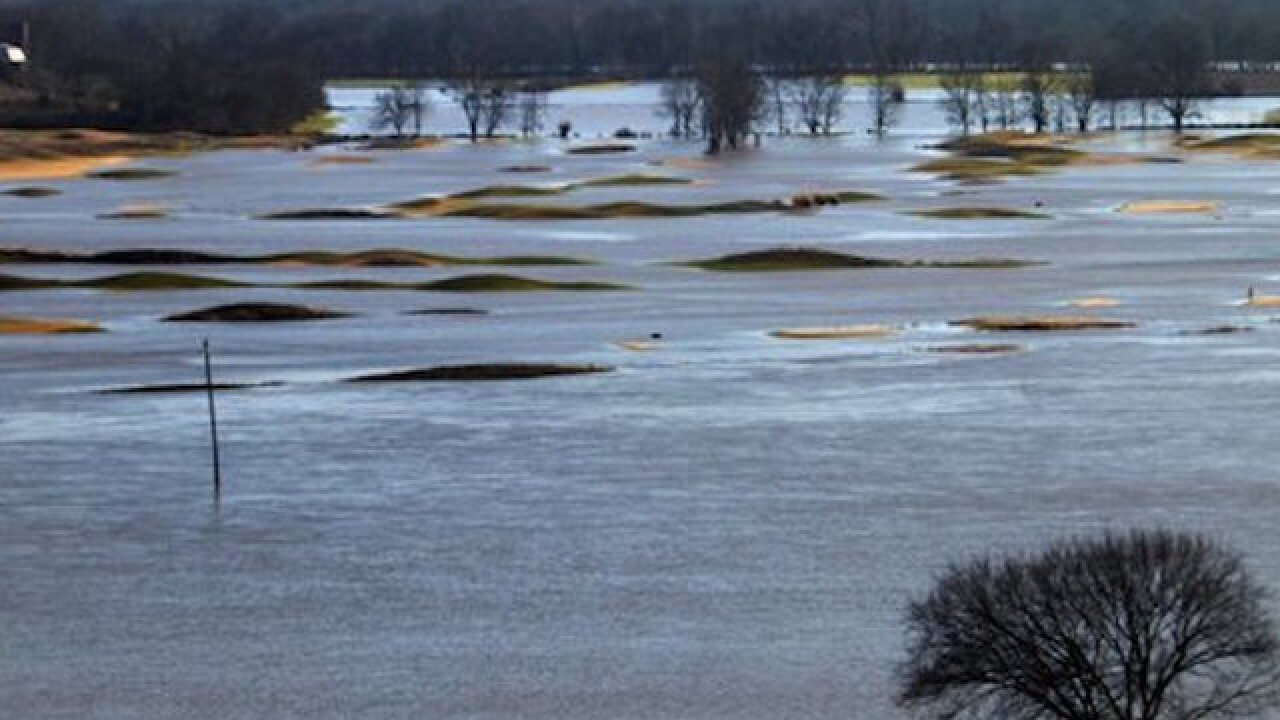 Jennie Crabbe
<p>The flooded Crescent area of west St. Louis County, Mo., including the Aberdeen Golf Club near Eureka, is seen from the overlook in Bluff View Park on Friday, Jan. 1, 2016. The worst of the dangerous, deadly winter flood is over in the St. Louis area, leaving residents of several water-logged communities to spend the first day of 2016 assessing damage, cleaning up and figuring out how to bounce back ó or in some cases, where to live. (Jennie Crabbe/St. Louis Post-Dispatch via AP) EDWARDSVILLE INTELLIGENCER OUT; THE ALTON TELEGRAPH OUT; MANDATORY CREDIT</p>

While the worst of the dangerous, deadly winter flood was over in the St. Louis area, farther south, things were getting worse. Two more levees succumbed Friday, bringing to at least 11 the number of levee failures.

The flood, fueled by more than 10 inches of rain over a three-day period that began last weekend, is blamed for 24 deaths. Searchers were still looking for four missing people — one teenager in Illinois, two men in Missouri and a country music singer in Oklahoma.

On Friday, water from the Mississippi, Meramec and Missouri rivers was largely receding in the St. Louis area. Two major highways — Interstate 44 and Interstate 55 — reopened south of St. Louis, meaning commuters who return to work next week won't have hourslong detours. Some evacuees were allowed to return home.

But in the far southwestern tip of Illinois, the 500 or so people living behind the Len Small levee, which protects the hamlets of Olive Branch, Hodges Park, Unity and rural homes, were urged to move to higher ground after the Mississippi began pouring over the levee.

Alexander County Board Chairman Chalen Tatum said sandbagging efforts were cut off because it was simply too dangerous for the volunteers. Far more water is to come before the Sunday crest.

In central Illinois, the body of one of two teenagers missing since Monday was located on Friday. Devan R. Everett, 18, was found in the water near where dive crews found the pickup truck he and the other teen were last seen in.

On Saturday, Illinois' governor resumed his tour of flood-damaged areas for the second day, with planned stops in Cairo and Olive Branch. A day earlier he activated Illinois National Guard soldiers to help with flood recovery efforts as needed. In Missouri, Nixon planned stops in Eureka and Cape Girardeau.

In St. Mary, Missouri, a town of about 360 residents 50 miles south of St. Louis, neighbors and volunteers placed sandbags around homes after a small agricultural levee broke. The Mississippi River was expected to crest there Saturday at about 3½ feet below the 1993 record.

The main culprit in the St. Louis region was the Meramac River, a relatively small Mississippi tributary. It had bombarded communities in the far southwestern reaches of the St. Louis suburbs during the week. By Friday, it was relenting, but not before some points topped the 1993 record by 4 feet.

Two wastewater treatment plants were so damaged by the floodwaters that raw sewage spewed into the river. A water plant closed at High Ridge.

Hundreds of people were evacuated in Pacific, Eureka, Valley Park and Arnold, and many of their homes took in water.

Among those displaced were Damon Thorne, 44, and his 60-year-old mother, Linda, who live together in an Arnold mobile home park that washed away after a small private levee proved no match for the surging Meramec. For now, the Thornes are staying in a Red Cross shelter at a Baptist church.

In West Alton, Missouri, a Mississippi River town that sits near the convergence with the also-elevated Missouri River just north of St. Louis, evacuees couldn't yet return because floodwaters continued to pour over the overwhelmed levee, Mayor Willie Richter said. He estimated that about three-quarters of the homes were damaged.

Nearly 1,000 residents left West Alton after the 1993 flood, never to return. Richter said some of the remaining 500 or so may leave this time, too. Richter, 46, said he's staying put in the same house where he grew up. He plans to raise the home off the ground a bit.

"It's our family home, so it's hard to think about leaving," Richter said.

In southeast Missouri, the fast-rising Mississippi damaged about two-dozen homes in Cape Girardeau and threatened a power substation, though the community of nearly 40,000 residents is mostly protected by a flood wall. The crest prediction at Cape Girardeau expected Sunday was upgraded to a foot and a half above the 1993 record.

In nearby Allenville, access into the often-flooded town was cut off by high water. Most of the four dozen residents stayed anyway, using boats to get around.

"They are used to being isolated and cut off, but with this record height, we're confident some homes will get wet," Cape Girardeau County emergency management director Richard Knaup said. "We're just not sure how many."

Parts of the South are also in the flood's path. Moderate Mississippi River flooding is expected in Memphis, where officials were moving to protect roads and an airport. The National Weather Service issued a flood advisory for the Cumberland River at Dover, Tennessee, through Monday evening.

Minor flooding along the Ohio River was affecting the Kentucky cities of Owensboro and Paducah, and the crest wasn't expected until Thursday.