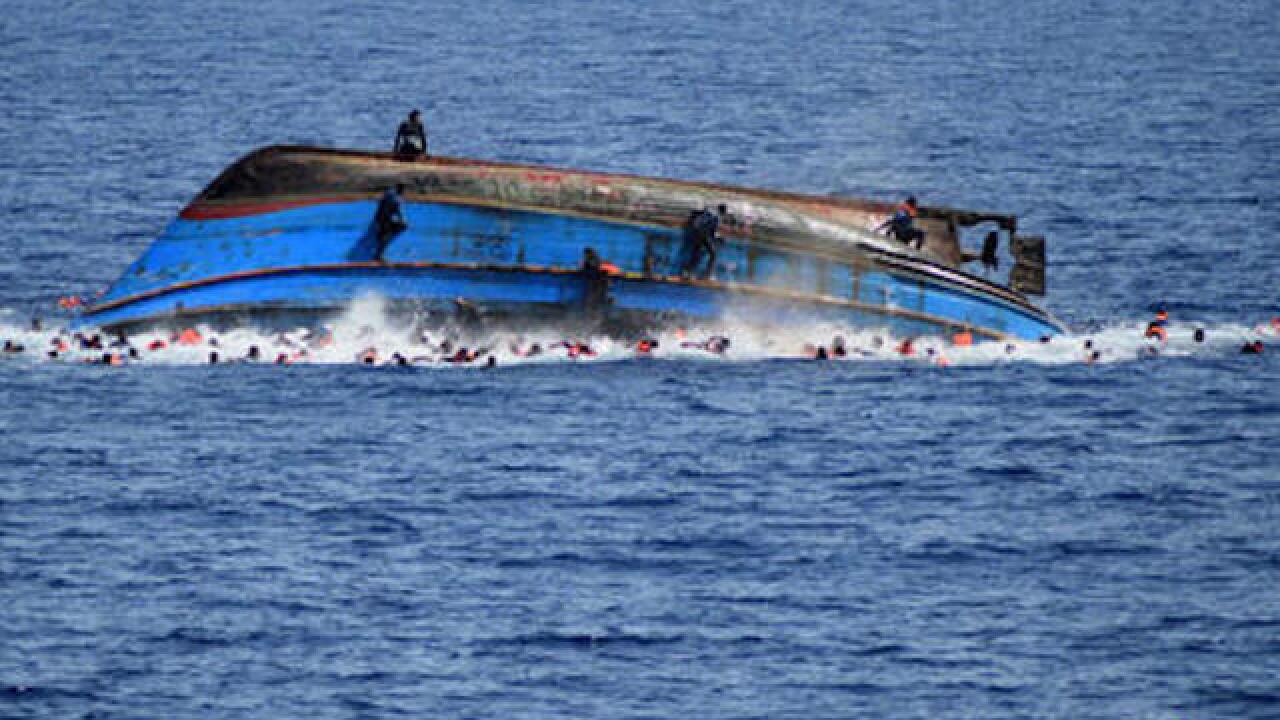 Copyright Associated Press
<p>In this May 25, 2016 file photo made available by the Italian Navy, people try to swim away moments after their boat overturned off the Libyan coast. Over 700 migrants are feared dead in three Mediterranean Sea shipwrecks south of Italy in the last few days as they tried desperately to reach Europe in unseaworthy smuggling boats, the U.N. refugee agency said Sunday, May 29, 2016. (Italian navy via AP Photo)</p>

GENEVA (AP) — The treacherous Mediterranean Sea crossing from Libya to Italy has claimed the lives of over 1,030 migrants in the last week, mostly as barely seaworthy smuggling boats foundered and sank despite calm seas and sunny skies, a migration agency said Tuesday, citing new accounts from survivors.

The staggering death toll foreshadows more disasters ahead in the next few months as the region gears up for its traditional summer-fall spike in human trafficking as the weather improves and the seas grow warmer. Aid officials said it also suggests that Libyan smuggling gangs are using even riskier tactics than before to profit from the torrent of those desperate to reach the safety or economic promise of Europe.

Making matters worse, the jaw-dropping tally is only from capsizings or shipwrecks that are known to authorities, who readily admit they simply do not know how many people are being cheated by smugglers, jammed into obviously unsuitable vessels and swallowed up by the vast waters of the southern Mediterranean.

Two Eritreans interviewed by The Associated Press — among the hundreds of shipwreck survivors brought to Italian ports — were haunted by the fact that so many women and children had been on their capsized boat and did not survive. They said they could still hear the cries of the children.

"I started to cry when I saw the situation and when I found the ship without an engine. There were many women and children," said 21-year-old Filmon Selomon who plunged into the sea to save himself. "Water was coming in from everywhere, top, bottom."

"The children were crying and the women," said Habtom Tekle, a 27-year-old Eritrean. "At this point I only tried to pray. Everybody was trying to take the water out of boat."

U.N. refugee spokesman William Spindler told reporters at a news conference in Geneva that this year is already proving to be "particularly deadly" on the Mediterranean, with some 2,510 lives lost compared to 1,855 in the same time span a year ago.

The International Organization for Migration, citing what could be a record weekly death toll on the Mediterranean by its count, said Tuesday that 62 people were confirmed dead and another 971 were missing and presumed dead in nine separate deadly emergencies since May 25 on the Libya-to-Italy sea route.

The U.N. refugee agency said Tuesday it had tallied at least 880 deaths on the Mediterranean over the last week. Spindler noted such estimates are an inexact science, and said his agency's figures tend to be "conservative."

Last week marks only the second time since January 2014 that 1,000 deaths or more on that route have been tallied in a single month — let alone a single week, said IOM spokesman Joel Millman. The only other time was in April last year, with 1,244 dead.

He said up until last week, only 13 migrant crossing deaths had been recorded in May in the southern Mediterranean.

Spindler gave the following estimates: about 100 people died in a shipwreck Wednesday; some 550 others died in another capsizing Thursday, the one that the two Eritreans survived; and a third sinking Friday left 170 others missing and presumed dead.

The discrepancy between the agencies stems largely from Wednesday's sinking: IOM now estimates that 250 people died in that incident. Like UNHCR, it had originally estimated about 100 deaths.

UNHCR said shipwreck survivors who landed in Augusta, Italy, over the weekend indicated that another 47 migrants were missing at sea after a raft carrying 125 migrants deflated. It said eight others were lost overboard from another boat and four deaths were reported after fire on a separate vessel.

Spindler, speaking alongside Millman, said authorities were still trying to understand the jump in deaths, even as they know the region is moving into its high season for human trafficking.

He said some survivors told his agency that some Libyan smugglers appeared to be trying to earn extra cash before the Islamic holy month of Ramadan, which begins next week.

Spindler also noted new and strikingly risky tactics from the smuggling gangs: he said before this, he had never heard of smugglers using one overloaded boat carrying hundreds of people to tow another vessel without an engine packed with even more people. The second boat sank Thursday — the most deadly capsizing last week — and carried mostly Eritreans, according to the IOM.

Millman said traffickers could be also cutting prices to draw in new migrants — mostly from elsewhere in Africa — and have recently been seen using bigger boats that can carry up to 750 people. Over the last year "smaller rubber inflatable dinghies" were more prevalent on the smuggling route, he said.

Those factors appear to mean that more people were dying even as fewer were coming.

IOM said nearly 19,000 migrants arrived by sea to Italy in May — more than twice the figure in April but less than the 21,221 arrivals in the same month a year ago.

A deal between the European Union and Turkey to return migrants has significantly dampened the key route into Europe from Turkey to Greece, which hundreds of thousands of people used last year. That has left international refugee agencies watching for signs that migrants may be shifting to the much longer and more dangerous Libya-Italy option.

"As of now, UNHCR has not seen evidence of a significant diversion of Syrians, Afghans or Iraqis from the Turkey-Greece route to the central Mediterranean one," Spindler said.

He reiterated UNHCR's appeal to the EU to allow for more legal pathways for refugees to reach Europe, calling it "shameful" that the 28-nation bloc had resettled fewer than 2,000 people under an EU plan announced last year to resettle 160,000.