Half of US under threat for severe weather 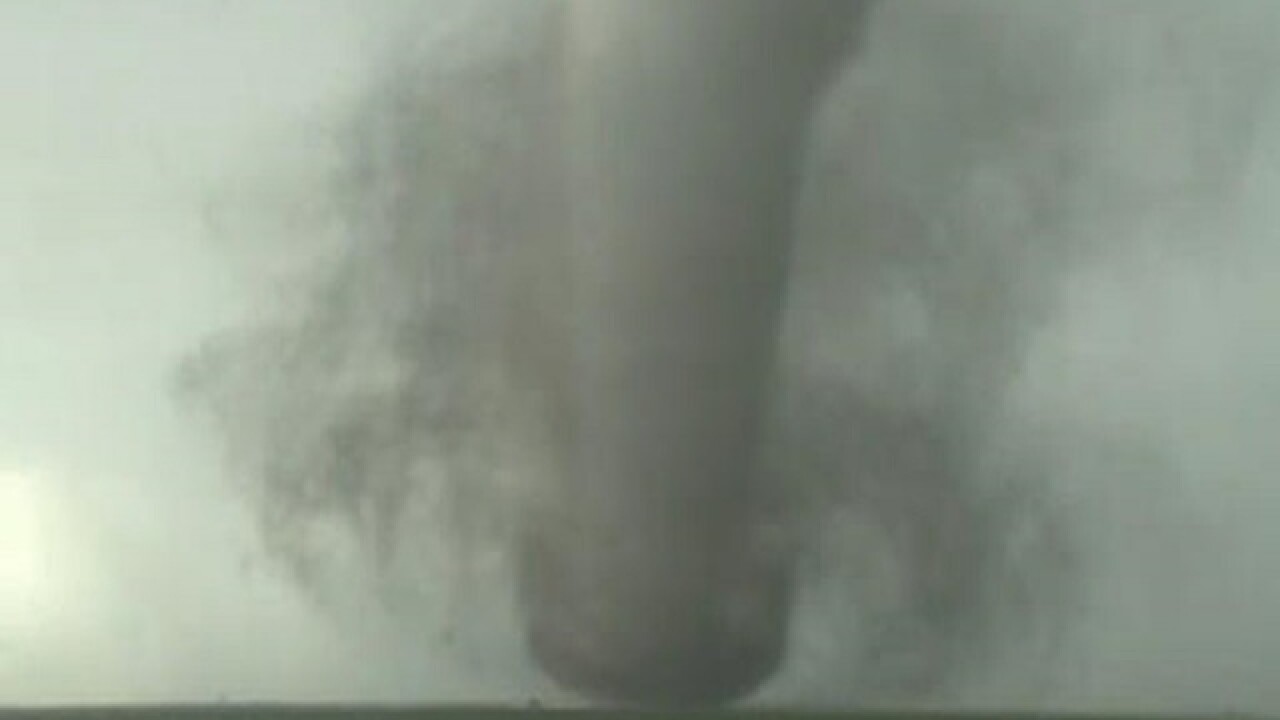 <p>This image made from a Tuesday, May 24, 2016 video by KWTV-KOTV, shows a funnel cloud moving across the field near Dodge City in Ford County, Kan. Crews are evaluating the damage Wednesday after tornadoes destroyed several homes in western Kansas as a series of severe storms swept across the Plains. (KWTV-KOTV via AP)</p>

ATLANTA (AP) — From tropical rains to tornadoes, about half of the U.S. expected to see wet and at times severe weather this weekend, capping a week of scorching temperatures out West and flooding that killed nine soldiers when their military vehicle got caught in the rushing waters of a rain-swollen creek at Fort Hood, Texas.

People along the Gulf Coast kept a watchful eye on a system over the Caribbean Sea that was forecast to bring 5 to 10 inches of rain to parts of Florida. The storm is likely to develop into a tropical cyclone.

In the Mid-Atlantic region, the nation's capital and more than 17 million people braced for the possibility of severe thunderstorms, damaging winds and tornadoes Sunday.

Here's a look at what people are doing to prepare and recover from the various types of weather:

The hurricane season is just a few days old, and its third named storm may be developing near Mexico's Yucatan Peninsula. The U.S. National Hurricane Center in Miami says the system has a good chance of forming into a tropical cyclone, and even if it doesn't, it will still bring heavy rains along the Gulf Coast.

Police in St. Petersburg distributed sandbags to residents Saturday in anticipation of the drenching beginning Sunday night. Gov. Rick Scott was closely monitoring the weather and warned residents, tourists and businesses to be prepared.

Florida's emergency management director Bryan Koon said they expected a fast-moving storm, which means it could mature rapidly. The severe weather could last through Tuesday.

"Even if this system does not develop into a named storm, it still poses significant risks from flooding, damaging winds and tornadoes, and rip currents," he said.

If the storm does develop, it would be named Colin.

Last weekend, Bonnie formed off the South Carolina coast, inundating parts of the East Coast. On Saturday, Bonnie was weakening far offshore and posed no threat to land.

TAKING AIM AT THE NATION'S CAPITAL

Damaging winds, a tornado or two and marginally severe hail are expected from the Southeast to as far north as New York.

It's been several days since deadly flooding began in parts of southeast and central Texas, and the rain just started to let up Saturday.

In its wake, Army officials investigated a training exercise that went horribly wrong at Fort Hood, leading to the deaths of nine soldiers whose vehicle was swept into rushing waters of a rain-swollen creek. Three soldiers were pulled from the water and survived.

Coryell County emergency medical services chief Jeff Mincy told the Killeen Daily Herald that only the wheels of an Army troop-transport truck were visible after swift flood waters washed the 2½-ton vehicle from a low-water crossing on the installation. He surmised the waters were about 8 feet deep.

Meanwhile, several counties in and around Houston were under a flash flood watch or flood warning Saturday due to days of rain that had creeks and rivers flowing out of their banks.

The Brazos River is causing trouble for communities in Fort Bend County, especially near where the river empties into the Gulf of Mexico. County Judge Robert Hebert said floodwaters are receding but warned some neighborhoods are still cut off and many local streets are impassable.

"As water levels recede we will be able to get into these inundated areas and assess the damage," he said.