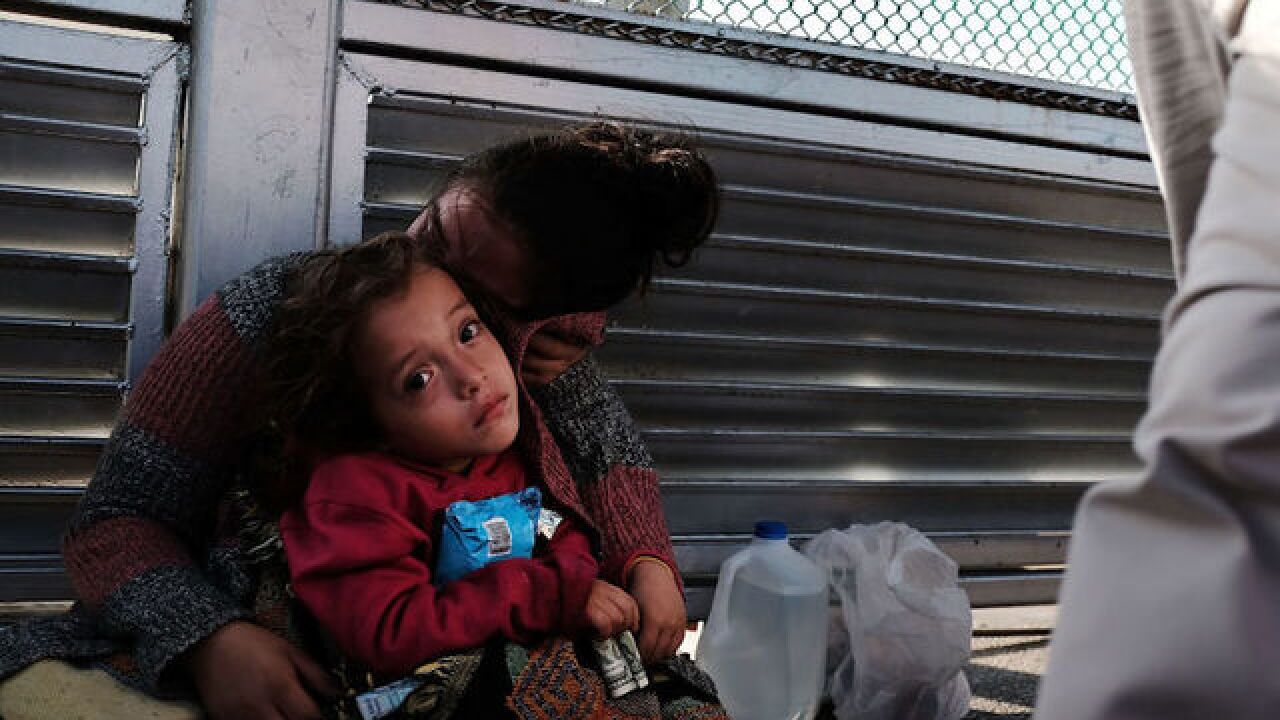 Image copyright 2018 Getty Images. All rights reserved. This material may not be published, broadcast, rewritten, or redistributed.
Spencer Platt
<p>A Honduran child and her mother, fleeing poverty and violence in their home country, waits along the border bridge after being denied entry from Mexico into the U.S. on June 25, 2018 in Brownsville, Texas. Immigration has once again been put in the spotlight as Democrats and Republicans spar over the detention of children and families seeking asylum at the border. </p>

House Republicans abandoned a GOP leadership-backed immigration bill Wednesday, the latest setback in the years-long intraparty war between Republicans on the polarizing issue.

The bill, which was never expected to pass, failed by an even wider margin than expected -- 121-301 -- and had far less Republican support than a more conservative bill that failed last week.

With little fanfare and erratic presidential support, the bill represented House Republicans' most steadfast effort in decades to find a compromise between moderates and conservatives, legislation that would have provided a path to citizenship for recipients of the Deferred Action for Childhood Arrivals program, as well as $25 billion for border security, including the President's border wall.

But, the legislation also unearthed a long known, yet still jarring, reality for Republicans just months ahead of the midterm elections. After weeks of discussions, closed-door listening sessions, a short burst of administration lobbying and the blessing of House leaders, rank-and-file members still remain deeply divided about how to address and reform the country's immigration system.

"There's no unicorn -- nothing that Jim Jordan would vote for that Carlos Curbelo could ever support," said one senior GOP aide, referring to a non-existent bill that could bridge the gap between the conference's most conservative and moderate members. "And vice versa."

Conservatives, afraid of how their base may react, did not see a reason to vote for it even if they agree in large part with many of the bill's provisions.

"This only works if Trump's behind us," one member said. "No use sticking out our necks if the bill's going to fail."

In the last few weeks, President Donald Trump has sent mixed messages. At first, Trump said he wouldn't back the compromise bill in an interview with Fox News only to have his staff issue a statement later that day saying he would back it. Then, after visiting Capitol Hill himself Tuesday last week and dispatching Cabinet officials to Capitol Hill, Trump tweeted Friday that members of Congress were wasting their time.

"Republicans should stop wasting their time on immigration until after we elect more Senators and Congressmen/women in November. Dems are just playing games, have no intention of doing anything to solve this decades-old problem. We can pass great legislation after the Red Wave," Trump tweeted.

The move has made members skittish, especially conservatives who fear supporting anything that could be construed as backing so-called amnesty back home.

But on Wednesday -- just hours before the vote -- the President asked members to support the GOP's own compromise bill, which he referred to as Goodlatte II.

"HOUSE REPUBLICANS SHOULD PASS THE STRONG BUT FAIR IMMIGRATION BILL, KNOWN AS GOODLATTE II, IN THEIR AFTERNOON VOTE TODAY, EVEN THOUGH THE DEMS WON'T LET IT PASS IN THE SENATE. PASSAGE WILL SHOW THAT WE WANT STRONG BORDERS & SECURITY WHILE THE DEMS WANT OPEN BORDERS = CRIME. WIN!" Trump tweeted.

But it was not enough to sway Republicans.

On their last conference before the vote, Republican Study Committee Chairman Mark Walker, a conservative Republican from North Carolina, told reporters that members were still hoping Trump would weigh in again in support of the bill ahead of the vote.

"Whether it is something positive or negative when the President tweets it impacts whatever the situation might be specifically when it comes to anything we are trying to pass," Walker said.

Bringing a bill to the floor that isn't expected to pass is unusual in the House, a move that leadership was forced to take after moderate Republicans nearly forced an unusual procedural maneuver last month that would have required the House to vote on a series of immigration proposals some of which leaders did not back.

As a result, leaders agreed to bring a compromise bill to the floor, one that all factions of the conference had a chance to weigh in on. But, that bill, it turned out, also faced long odds. Without an unwavering endorsement from the White House, conservatives have been reluctant to back it even as moderates entertained the idea over the weekend of including an amendment that would have expanded e-Verify and introduced a new guest worker program. On Tuesday night, sources familiar told CNN that the amendment would not be included.

Adding more drama to the vote Wednesday is the fact that the conservative proposal known as the Goodlatte bill -- named after Virginia Republican Rep. Bob Goodlatte -- earned 193 votes, just a little more than 20 votes shy of passing. The compromise bill was postponed last week to try and get the vote total up, but it did far worse Wednesday.

A senior House Freedom Caucus aide said Trump's 11th-hour push for the compromise bill reflects the fear among Republican congressional leaders that the final vote count could fall below the level of support members showed for a more conservative immigration bill that failed last week.

"Leadership is a little desperate to increase the count because they got their fingers burned with the high count on the Goodlatte one," the aide said. "It will complete the humiliation if the compromise bill gets fewer votes."

For his part, Speaker Paul Ryan has been sanguine about the looming failure of the bill in recent days, sticking to what has long been his public and private theory: it will take a new deadline on DACA protections to drive some kind of bipartisan consensus on a broad proposal. The current bill, even though it was crafted without Democrats -- or their support — would serve as a blueprint for the effort once that occurs.

"What we have here is the seeds of consensus that will be gotten to hopefully now, but if not, later," Ryan told reporters Tuesday. "