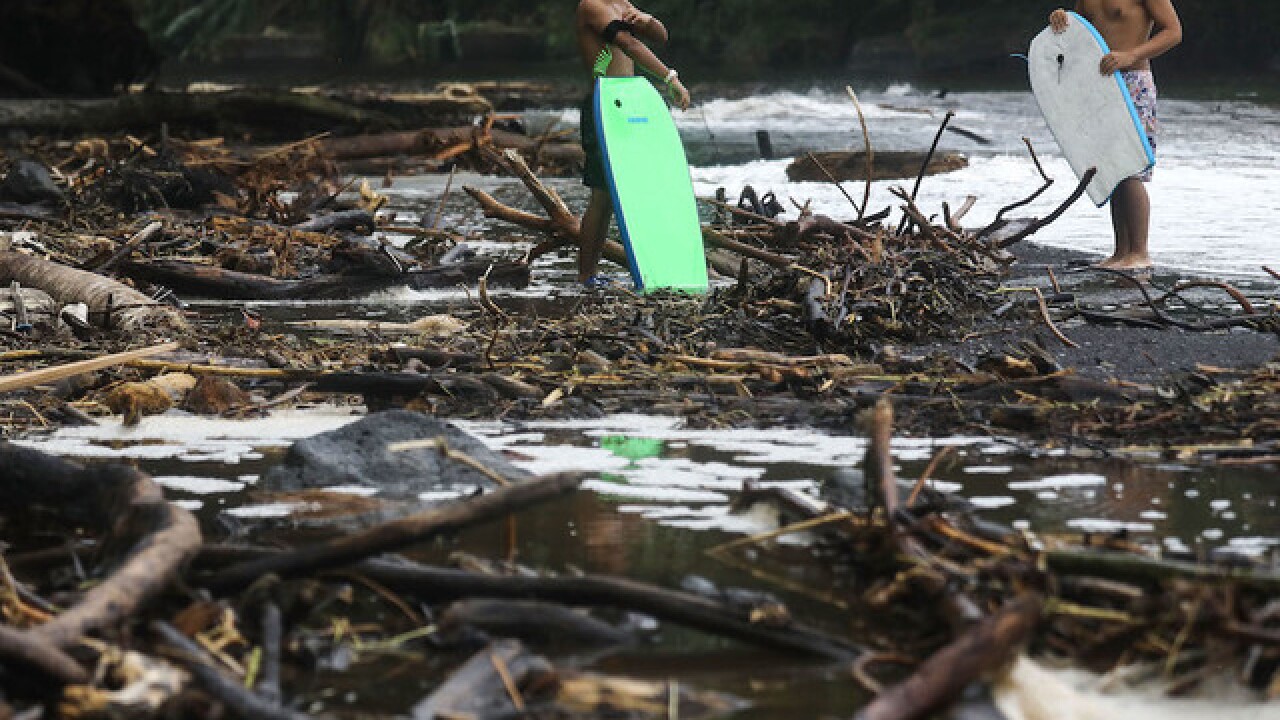 Image copyright 2018 Getty Images. All rights reserved. This material may not be published, broadcast, rewritten, or redistributed.
Mario Tama
<p>Bodyboarders wait to enter the ocean near the remains of trees destroyed by flooding from the former Hurricane Lane at Honoli'i Beach Park on August 26, 2018 in Hilo, Hawaii. Flooding carried the trees down the mountainside into the ocean where they eventually washed ashore onto the beach. </p>

Hurricane Lane may have passed by the island chain over the weekend, but Hawaii is still feeling the storm's aftereffects as residents recover from days of heavy rain and remain on the lookout for even more showers.

Lane dropped 52.02 inches of rain on Hawaii from August 22-26, the second highest rainfall total from a tropical cyclone in the US since 1950, according to preliminary data from the National Weather Service (NWS).

That's behind only the 60.58 inches dumped on Nederland, Texas by Hurricane Harvey last year.

Hawaii's Big Island -- the easternmost island in the chain -- was hammered hardest by rain. Some residents there had to be evacuated, with water rescues occurring in Hilo and Keaau, the NWS said. A number of roads were closed by flooding and landslides.

The entire state is under a flash flood watch through Tuesday.

The NWS said severe runoff also could cause some roads to become dangerous and impassable. Debris in streams and gulches might also clog bridges and culverts resulting in flooding, the NWS said.

Floodwater 'through my room'

In April, heavy rains caused a landslide to block the road to Hunter Ewald's family home on the Hawaiian island of Kauai. The road was finally cleared two weeks ago.

Ewald, 24, said the rain began Sunday and floodwater entered the house where he and eight other family members live early Monday after the nearby Waiola Stream burst its banks. "It went through my room, the bathroom and whole downstairs area."

The family house is located about 100 yards from the stream, he said.

"It's considered a stream, but it's bigger than some rivers," Ewald said.

Ewald recorded video footage of the water swirling through the property, carrying shoes and other belongings in its current and cascading down steps like a waterfall.

He said the water remained at the levels he recorded for about two or three hours.

"It's gone down a lot but there's a river going through my yard now that wasn't there before -- so that's there."

Ewald said his family was planning to stay put.

"If we leave we might get hit by a landslide or might get stuck. There's a lot of rain. About 5 months ago -- during the April rain -- a landslide covered our road. Two weeks ago it reopened. We've been hiking in and out and my family actually had to buy a 4-wheeler -- a Polaris -- it's been really hard for us," he said.

Ewald said authorities had provided minimal help to get the road back up and working.

For now, the family is safe from Lane's floodwater. The stream has retreated.

A generator is providing power.

"Our electricity is out. Our turbine is out. The batteries from our solar panels have been drained," Ewald said.

"We were prepared for a hurricane and the hurricane dissipated," he said. "Because of the big rain in April we were prepared ... we kind of knew what to do, you know? We had our food stocked and ready. And tonight we're under flash flood watch again."

Lane was downgraded from a hurricane to a tropical storm Friday.

On the island of Maui, CNN affiliate KHON reported that a giant sinkhole had cracked open Friday in Haiku, stranding three families.

"We heard a really loud crack, like a bunch of trees falling at once, rumbling like thunder," resident Jennifer Kryska told the station. "We came up top and the entire cul-de-sac split open. There's a fissure in the ground about 25- to 30-feet deep. Water was rushing down through it. It carried all the metal piping and everything through our backyard. The water came up probably a good five to six feet at its peak at night."

Hawaii's Department of Transportation posted images of landslides and flooding to Twitter as it worked to clear roads on Oahu, Kauai, Maui and Hawaii.