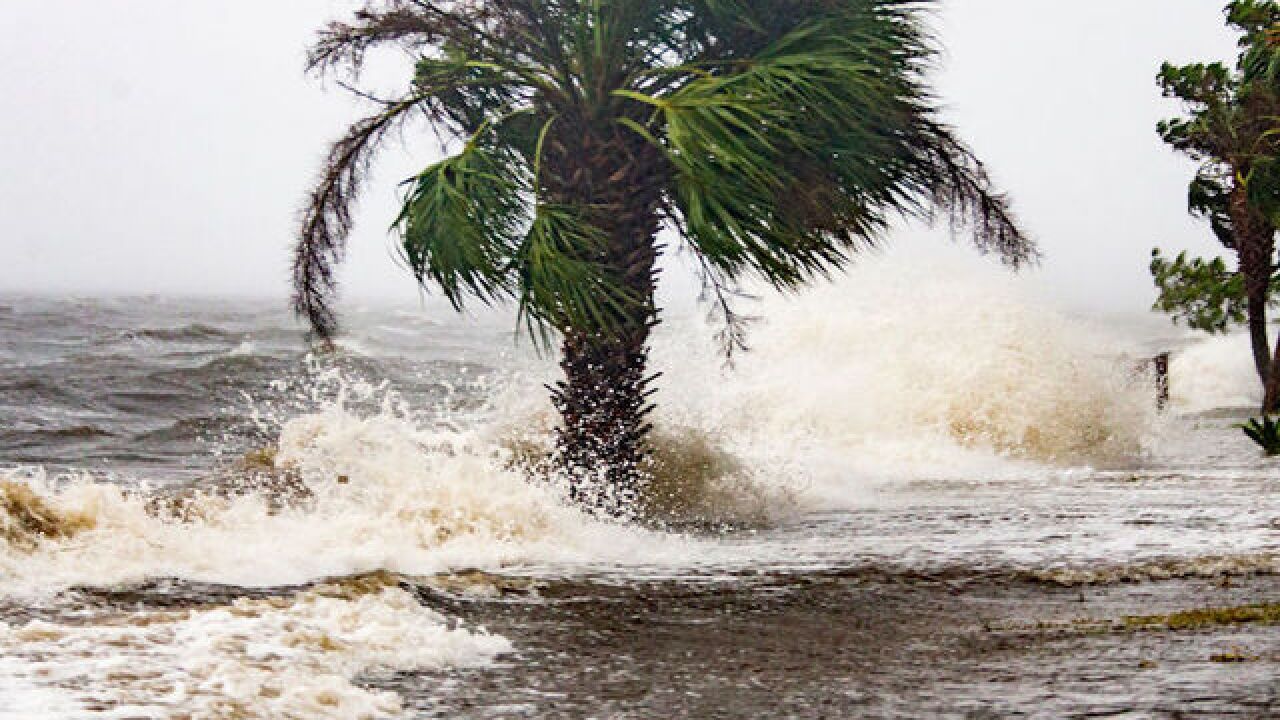 A potentially catastrophic Category 4 Hurricane Michael has made landfall as the strongest hurricane to hit the Florida Panhandle in recorded history, with its winds and storm surge wreaking havoc along the shore.

Earlier, Gov. Rick Scott called Michael "the worst storm that our Florida Panhandle has seen in a century."

Streets were flooding in the Panhandle city of Apalachicola. In Panama City Beach, winds of about 100 mph furiously whipped the trees in the early afternoon as siding ripped from a building got caught against a fence.

Earlier in that oceanside city, video from a meteorologist showed new construction collapsing in high winds.

Among the concerns: Flash-flooding with heavy rain; life-threatening storm surges up to 14 feet high; and devastating winds, not just in the Panhandle, but southern Alabama and Georgia.

The storm's wind could be dangerously strong well after landfall, into the night.

"That's going to knock down a lot of trees, say, in the Tallahassee area, all of these areas inland. It's going to be big problems ... as far as the wind goes, and then coastal storm surge," CNN meteorologist Jennifer Gray said.

• As of shortly before 2 p.m. ET, Michael's center had maximum sustained winds of 155 mph, moving inland near Mexico Beach.

• The pressure inside the storm has dropped to 919 millibars, which is lower than the pressure of Hurricane Andrew in 1992. Pressure is one way that meteorologists measure the intensity of a hurricane, along with wind speeds

• About 4.2 million people were under hurricane warnings in Florida's Panhandle and Big Bend regions, along with parts of southeastern Alabama and southern Georgia. Tropical storm warnings cover 21 million people in several states.

• Up to 14 feet of storm surge is expected in Apalachicola, likely this afternoon, near the peak of the storm. About 50% of residents there didn't evacuate, Apalachicola Police Chief Bobby Varnes estimated. "If they need help, they can give a call, but it's probably too dangerous. ... There's no ambulance service, no medical, so they're pretty much going to be on their own until it lets up."

• Michael still could be a Category 2 storm (wind speeds of 96-110 mph) when it crosses into southern Georgia on Wednesday evening, forecasters said. "The citizens in Georgia need to wake up and pay attention. ... This is going to be the worst storm that southwest Georgia and central Georgia (has) seen in many, many decades," Federal Emergency Management Agency Administrator Brock Long said.

• At least 103,000 customers are without power along the Florida Panhandle, utility companies said. "There will be hundreds of thousands, if not millions, without power for a very long time," CNN meteorologist Chad Myers said.

Governor: 'It's too late to get on the road'

Gov. Scott on Monday and Tuesday urged people to get out of the way as Michael strengthened rapidly over the Gulf of Mexico after lashing Central America and western Cuba. Officials issued mandatory or voluntary evacuation orders in at least 22 counties on the Florida Gulf Coast.

On Wednesday morning, he said on Twitter that "the time for evacuating along the coast has come and gone."

Scott extended a state of emergency to 35 counties and activated 2,500 National Guardsmen; he said more than 1,000 search-and-rescue personnel will be deployed once the storm passes.

If it makes landfall as a Category 4, Michael would not only be the strongest hurricane to hit the Panhandle in recorded history, but it also would be the strongest storm in terms of wind speed to make landfall in the country this year.

Michael's rapid intensification -- it was a tropical storm in the Gulf on Sunday and a Category 1 hurricane midday Monday -- may have caught some coastal residents by surprise, despite forecasters' warnings of strengthening.

Newlyweds Jessica Ayers and Don Hogg told CNN they and some relatives were staying put in Panama City on Wednesday morning, having decided against leaving because they weren't in an evacuation zone.

"I'm definitely getting a little bit more scared, I have to say," Ayers said.

They have a generator, so they hope to have power, should regular service stop. They've identified an interior bathroom as a place to take cover if winds get extreme.

Janelle Frost and Tracy Dunn told CNN they were staying put in nearby Panama City Beach. They said they wanted to stay to help those who couldn't afford to leave, such as retirees.

"There's so many people that live around where we're at, and we wanted to make sure they're OK," Frost said. "We made the decision to stay to try and help them."

In Tallahassee, Kaitlyn Mae Christensen Sacco said she was taking refuge in her home. She has a generator and a camp stove, and she parked her car at a nearby church lot bare of any trees that might come down.

"We have our bathroom set up with blankets, a battery-powered fan, water, snacks and the tub set up for our dogs with pee pads," she said.

Even before landfall, Michael was sending ocean water onto the Panhandle's shores. Water was creeping into the southern Wakulla County town of Panacea, a picture from the National Weather Service showed.

Rain just one of several threats

A hurricane warning was in place from the Alabama-Florida border to the Suwannee River in Florida.

While it's likely to weaken as it moves across the southeastern United States, its heavy rains and flooding effects will spread far and wide.

Up to 12 inches of rain could fall in Florida's Panhandle and Big Bend areas, as well as southeastern Alabama and southern Georgia. Some parts of the Carolinas -- recently deluged by Hurricane Florence -- and southern Virginia could see up to 6 inches, the hurricane center said.

Florence made landfall last month as a Category 1 storm, killing dozens in the Carolinas and Virginia.

But the storm's center and where it makes landfall with its destructive winds represent just one of several concerns.

Life-threatening storm surges could slam the Florida Gulf Coast, with the deadliest of possibly 9 to 14 feet expected near the eyewall and to the east -- perhaps between Tyndall Air Force Base and the Aucilla River.

"That means the water will come miles in shore and could easily be over the roofs of houses," Scott said.

Damaging winds are expected in Florida, southeastern Alabama and southern Georgia. Tornadoes could spawn in the Southeast Wednesday into Thursday, forecasters said.

Tolls were being suspended in the state's northwest region to ease the evacuation process, and the Florida Highway Patrol is sending nearly 350 state troopers to the Panhandle and Big Bend areas, Scott said.

Michael's strength may reflect the effect of climate change on storms. The planet has warmed significantly over the past several decades, causing changes in the environment.

Human-caused greenhouse gases in the atmosphere create an energy imbalance, with more than 90% of remaining heat trapped by the gases going into the oceans, according to the National Oceanographic and Atmospheric Association. There's evidence of higher sea surface temperature and atmospheric moisture, experts say.

While we might not get more storms in a warmer climate, a majority of studies show that those that do form will get stronger and produce more rain. Storm surge is worse now than it was 100 years ago, thanks to sea level rise.

According to Climate Central, a scientific research organization, the coming decades are expected to bring hurricanes that intensify more rapidly, should there be no change in the rate of greenhouse gas emissions.