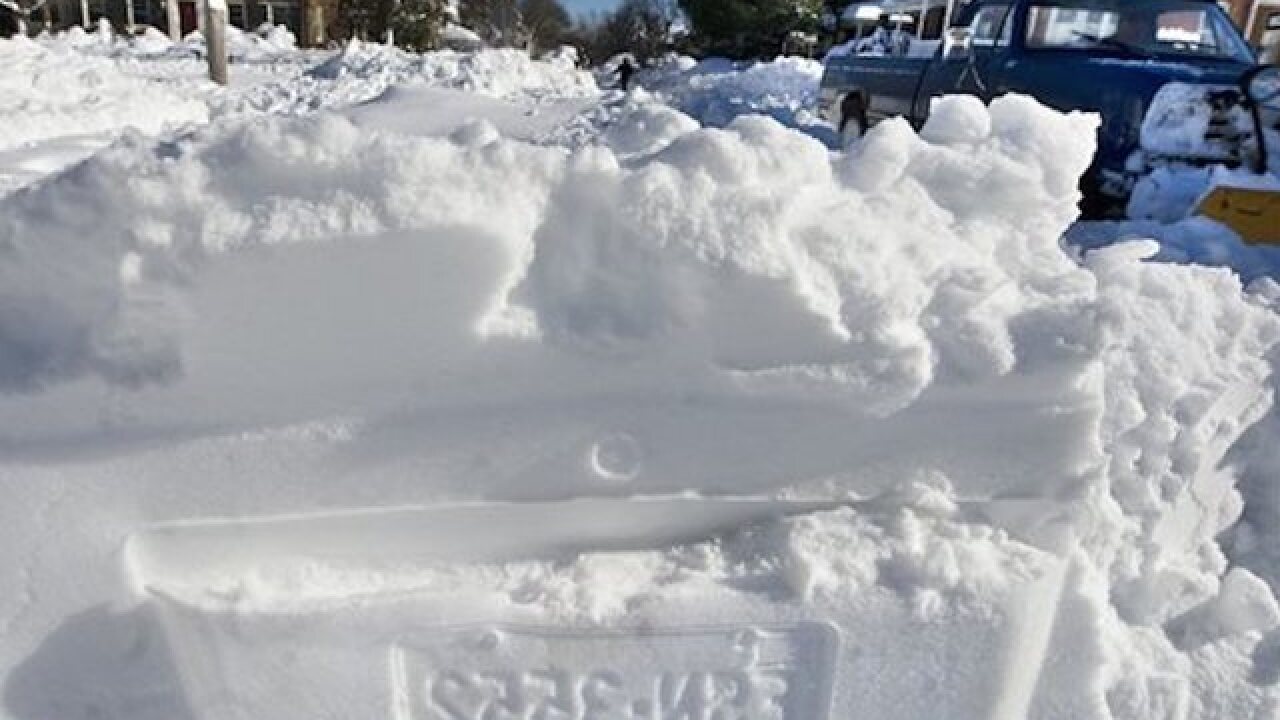 NEW YORK (AP) — East Coast residents who made the most of a paralyzing weekend blizzard trudged into the workweek Monday amid slippery roads, spotty transit service and mounds of snow that buried cars and blocked sidewalk entrances.

In Brooklyn, only one teacher at the Bedford-Stuyvesant New Beginnings Charter School called out, despite more than two feet of snow in the city.

"A lot of teachers are taking the train instead of driving," said Wanda Morales, director of operations at the school, as she stood outside while maintenance workers spread salt and parents dropped off their children.

Dave Lenowitz was standing on a snowbank in Philadelphia near what's normally the stop for the bus that takes him to his job as the director of a nonprofit.

"Normally I bicycle, but it's a little too slippery," he said. "There's not enough snow, otherwise I'd ski. It's only seven miles."

For others, the weekend extended into Monday because of closed schools and government offices. The storm dropped snow from the Gulf Coast to New England, with near-record snowfalls tallied from Washington, D.C. to New York City. At least 31 people have died as a result of the storm; the deaths occurred in car accidents, from carbon monoxide poisoning, and from heart attacks while shoveling snow.

U.S. Sen. Dick Durbin was on a rescheduled pre-dawn flight from Springfield, Illinois, to Chicago while on the way to Washington on Monday morning. The Illinois Democrat said he's not even sure he'll be able to get to D.C., but he's been through this before.

"Most of us who spend part of our lives in Washington know to expect the worst when it comes to snow," he said. "I knew the forecast was enough to cause a problem."

Pat Dougherty, a project manager for a construction management company, said he commutes daily to New York City from his home in suburban Philadelphia. He has never seen the line to board a train so long, because there were so many cancellations earlier. His 5:50 a.m. train on Monday had been canceled and he was waiting to board a later train.

"On days like this, it's normal for everything to be screwed up," Dougherty said.

Larry Davis was spending his birthday getting from Wilmington, Delaware, to Providence, Rhode Island, where he works in sales and marketing for a luxury brand. His flight was canceled so he took his rental car to the airport and took SEPTA to the train station.

"I've done this commute for 10 years and every 25th flight or so goes wrong," Davis said.

The snow began Friday, and the last flakes fell just before midnight Saturday. In its aftermath, crews raced all day Sunday to clear streets and sidewalks devoid of their usual bustle.

Sunday's brilliant sunshine and gently rising temperatures provided a respite from the blizzard that dropped a record 29.2 inches on Baltimore. It was just right for a huge snowball fight in Baltimore, where more than 600 people responded to organizer Aaron Brazell's invite on Facebook.

But one day of sunshine wasn't enough to clear many roads. Cars parked in neighborhoods were encased in snow, some of it pushed from the streets by plows. Sidewalk entrances were blocked by mounds of snow.

New York Mayor Bill de Blasio encouraged people to leave their plowed-in cars all week. Some didn't have a choice; plows clearing streets buried cars under a mound of ice and snow.

"I cleaned this two or three times and they keep blocking me in," Peter Quamina said as he shoveled out the front of his driveway in Bedford-Stuyvesant, Brooklyn. "This storm was bad as we get."

Federal offices will be closed Monday, and Virginia's state workers were told to stay home. Schools from Washington to the Jersey Shore gave students Monday off; In the D.C. suburbs, classes also were canceled for Tuesday.

New York's transit authority said partial service on the Long Island Rail Road was restored on three of its 12 branches and diesel train service was operating on three other branches. New York City subways, buses and Metro-North Railroad service were operating on a normal schedule Monday.

Broadway reopened after going dark at the last minute during the snowstorm, but museums remained closed in Washington, and the House of Representatives postponed votes until February, citing the storm's impact on travel.

Flying remained particularly messy after nearly 12,000 weekend flights and hundreds more on Monday were canceled. Airports resumed limited service in New York City, Baltimore, and Philadelphia, which said it got an entire winter's snow in two days. In the Washington area, Reagan National Airport tweeted that it saw its first flights Monday, and Dulles International Airport expected to resume flights late in the day. resumed at Baltimore-Washington Thurgood Marshall International Airport on Sunday.

Amtrak operated a reduced number of trains on all its routes, serving many people who couldn't get around otherwise, spokesman Marc Magliari said. But bus and rail service was expected to be limited around the region into Monday.

Overall snowfall of 26.8 inches in Central Park made it New York's second biggest winter storm since records began in 1869, and Saturday's 26.6 inches made for a single-day record in the city.

Washington's records were less clear. The official three-day total of 17.8 inches measured at Reagan National Airport was impossibly short of accumulations recorded elsewhere in the city. An official total of 22.4 inches landed at the National Zoo, for example.

The zoo remained closed through Monday but a video of its giant panda Tian Tian making snow angels got more than 48 million views. Joining the fun, Jeffrey Perez, of Millersville, Maryland, climbed into a panda suit and rolled around in the snow, snagging more than half a million views of his own.