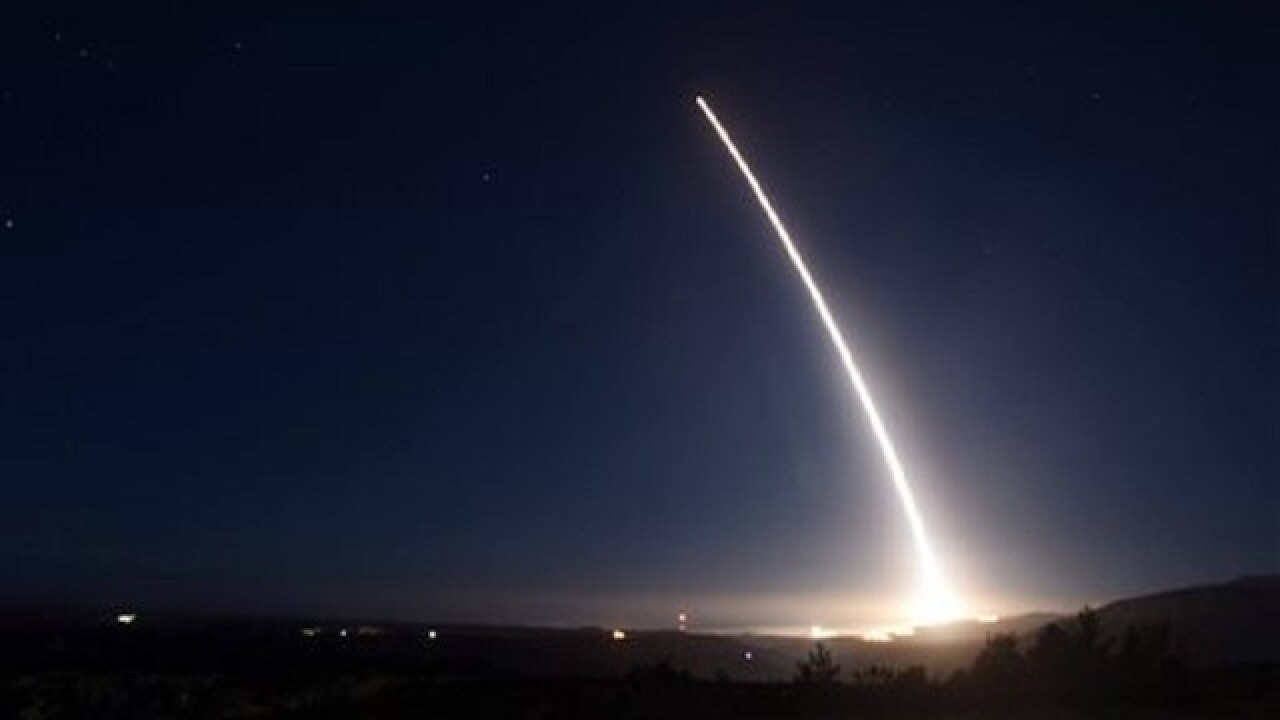 <p>In this photo provided by U.S. Air Force, an unarmed Minuteman III intercontinental ballistic missile launches during an operational test on Saturday, Feb. 20, 2016 at Vandenberg Air Force Base, Calif. The Air Force says the missile carried a test re-entry vehicle that headed for a target area 4,200 miles away to the Kwajalein Atoll in the Marshall Islands in the Pacific Ocean. The Air Force routinely uses Vandenberg to test Minuteman missiles from bases around the country.(U.S. Air Force via AP)</p>

TEHRAN, Iran (AP) — Iran reportedly test-fired two ballistic missiles Wednesday with the phrase "Israel must be wiped out" written in Hebrew on them, a show of force by the Islamic Republic as U.S. Vice President Joe Biden visited Israel.

Such phrases have been emblazoned on Iranian missiles before, but this test comes shortly after the implementation of a nuclear deal with world powers, including the U.S., and follows similar drills in recent days.

Hard-liners in Iran's military have fired rockets and missiles despite U.S. objections since the deal, as well as shown underground missile bases on state television.

There was no immediate reaction from Jerusalem, where Biden was meeting with Israeli Prime Minister Benjamin Netanyahu, who strongly opposed the nuclear deal.

Biden, speaking next to Netanyahu, did not acknowledge the missile launch directly but he issued a strong warning to the Iranians.

"A nuclear-armed Iran is an absolutely unacceptable threat to Israel, to the region and the United States. And I want to reiterate which I know people still doubt here. If in fact they break the deal, we will act," he said.

The semiofficial Fars news agency offered pictures Wednesday it said were of the Qadr H missiles being fired. It said they were fired in Iran's eastern Alborz mountain range to hit a target some 1,400 kilometers (870 miles) away off Iran's coast into the Sea of Oman. The U.S. Navy's 5th Fleet, which patrols that region, declined to comment on the test.

Soldiers often write slogans or messages on rockets and missiles. During Israel's 2006 war with Lebanon's Hezbollah militants, Israeli children were photographed writing messages on artillery shells in a community near the border. More recently, pictures emerged online of U.S. missiles bound for Islamic State group targets that had "From Paris with love" written on them, referring to last year's attacks.

Fars quoted Amir Ali Hajizadeh, the head of the Revolutionary Guard's aerospace division, as saying the test was aimed at showing Israel that Iran could hit it.

"The 2,000-kilometer (1,240-mile) range of our missiles is to confront the Zionist regime," Hajizadeh said. "Israel is surrounded by Islamic countries and it will not last long in a war. It will collapse even before being hit by these missiles."

Israel's Foreign Ministry declined to immediately comment. Iran has threatened to destroy Israel in the past. Israel, which is believed to have the only nuclear arsenal in the Mideast, repeatedly has threatened to take military action against Iran's nuclear facilities.

Hajizadeh stressed that Iran would not fire the missiles in anger or start a war with Israel.

"We will not be the ones who start a war, but we will not be taken by surprise, so we put our facilities somewhere that our enemies cannot destroy them so that we could continue in a long war," he said.

The firing of the Qadr H missiles comes after a U.S. State Department spokesman on Tuesday criticized another missile launch, saying Washington planned to bring it before the United Nations Security Council.

A nuclear deal between Iran and world powers including the U.S. is now underway, negotiated by the administration of moderate President Hassan Rouhani. In the time since the deal, however, hard-liners in Iran's military have made several shows of strength.

In October, Iran successfully test-fired a new guided long-range ballistic surface-to-surface missile. It was the first such test since Iran and world powers reached the landmark deal last summer.

Iran also has fired rockets near U.S. warships and flown an unarmed drone over an American aircraft carrier in recent months.

In January, Iran seized 10 U.S. sailors in the Gulf when their two riverine command boats headed from Kuwait to Bahrain ended up in Iranian territorial waters after the crews "misnavigated," the U.S. military said. The sailors were taken to a small port facility on Farsi Island, held for about 15 hours and released after U.S. Secretary of State John Kerry spoke several times with Iranian Foreign Minister Mohammad Javad Zarif.