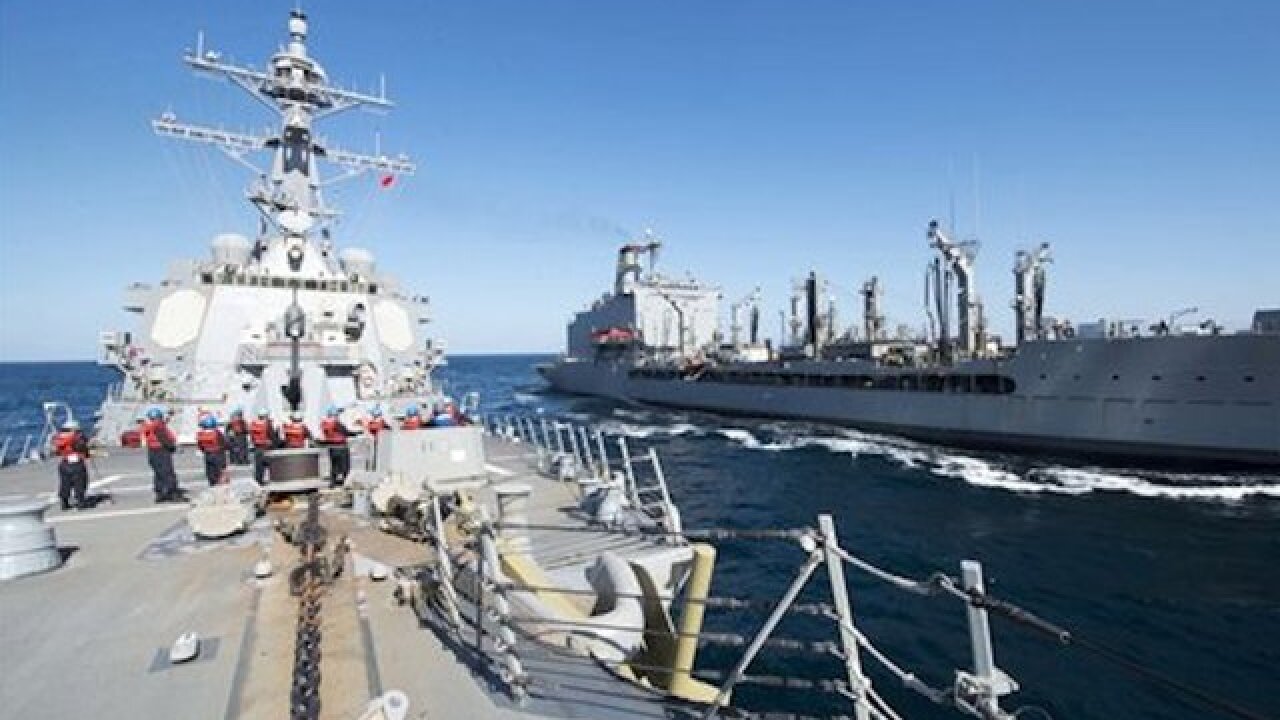 TEHRAN, Iran (AP) — Iran flew a surveillance drone over a U.S. aircraft carrier and took "precise" photographs of it as part of an ongoing naval drill, state media reported Friday. The U.S. Navy said an unarmed Iranian drone flew near a French and American carrier earlier this month, but couldn't confirm it was the same incident.

The reported overflight by the unmanned aircraft came after a series of naval incidents between Iran and the U.S. in the greater Persian Gulf, including test rocket fire by the Islamic Republic and its brief capture of American sailors who strayed into its territorial waters.

The U.S. Navy said it didn't open fire as the drone was unarmed and not threatening the ship's safety, but the incident again highlighted that tensions remain between America and Iran in Gulf waters despite their recent diplomatic detente.

The Associated Press could not independently verify the footage, published by Iranian state television and the semi-official Fars news agency, which has close ties to the Revolutionary Guard.

Cmdr. Kevin Stephens, a spokesman for the U.S. Navy's 5th Fleet based in Bahrain, said an unarmed Iranian drone flew near the French aircraft carrier Charles de Gaulle and "directly over" the USS Harry S. Truman on Jan. 12 as the vessels were in international waters in the Persian Gulf.

He said the Navy launched a helicopter that determined the drone wasn't armed and "posed no danger to the ship" as the carrier wasn't conducting flight operations at the time. His comments implied that had there been active takeoffs and landings of U.S. aircraft, the situation might have changed.

Stephens called the drone's flight "abnormal and unprofessional." He added that the U.S. Navy was "not in a position to verify the authenticity of the video as there are countless examples of similar footage to be found on the Internet."

The report by state television said the drone flight occurred on the third day of the naval exercise, suggesting it happened Friday.

Adm. Habibollah Sayyari, the commander of Iran's navy, called the drone overflight "a sign of bravery."

It "allowed our men to go so close to the warship and shoot such a beautiful and accurate footage of the combat units of the foreign forces," he told state television.

State television and the state-run IRNA news agency said an Iranian light submarine also participated in the surveillance operation. When asked about the submarine report, Stephens said "Iran has several submarines underway for its current exercise," but declined to discuss specifics.

The Iranian report did not name the U.S. vessel filmed by the drone. The nuclear-powered USS Harry S. Truman, based out of Norfolk, Virginia, is in the Persian Gulf region launching airstrikes and supporting operations against the Islamic State group in Iraq and Syria.

"We are confident in our force's ability to respond appropriately as the situation dictates and will defend ourselves should that prove necessary," he said.

Separately, state television said Iran's navy successfully fired surface-to-surface Noor cruise missiles during the drill at mock targets. Iran has announced other military exercises in the past to demonstrate the capabilities of its armed forces.

Iran's navy began the naval drill this week over a 3-million-square-kilometer (1.16-million-square-mile) area including parts of the Strait of Hormuz, the Gulf of Oman and the Indian Ocean. Iran said Wednesday its navy warned a U.S. warship to leave an area of the naval drill. The U.S. Navy later denied its operations were affected by the Iranian drill.

While Iran recently struck a nuclear deal with world powers including the U.S., its naval forces have continued its maneuvers. Iran has more than 2,000 kilometers (1,240 miles) of shoreline facing the Persian Gulf and the Sea of Oman.

The U.S. has criticized some of those maneuvers, including what it called a "highly provocative" Iranian rocket test fire in December near its warships and commercial traffic passing through the Strait of Hormuz. Iran denied launching rockets, though the U.S. later released footage showing the rocket fire.

The Strait of Hormuz, which sees nearly a third of all oil traded by sea pass through it, has been the scene of past confrontations between America and Iran.

On April 18, 1988, the U.S. attacked two Iranian oil rigs and sank or damaged six Iranian vessels, including two naval frigates, in Operation Praying Mantis. That came after the near-sinking of the missile frigate USS Samuel B. Roberts by an Iranian mine, laid amid the Islamic Republic's bloody 1980s war with Iraq.

A few months later, in July 1988, the USS Vincennes in the strait mistook an Iran Air flight heading to Dubai for an attacking fighter jet, shooting down the plane and killing all 290 passengers and crew onboard. The shoot-down of the jet came shortly after the U.S. vessel reported coming under fire from Iranian speedboats.

More recently, this January, Iranian forces captured 10 U.S. Navy sailors who entered Iranian territorial waters near Farsi Island, an outpost in the middle of the Persian Gulf that has been used as a base for Revolutionary Guard speedboats since the 1980s. The sailors were released within a day, though Iranian state media aired footage of the sailors' capture, angering U.S. politicians.