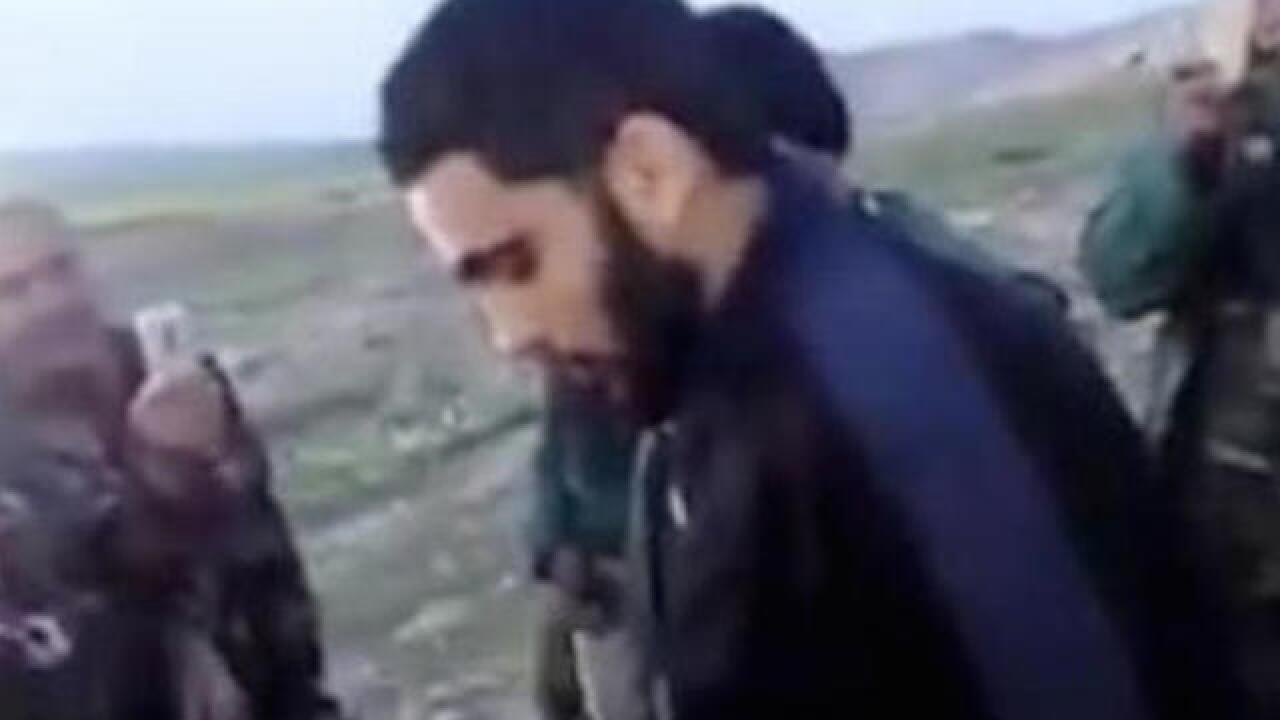 Kurdish fighter via AP
<p>This image made from video posted on Twitter by a Kurdish fighter shows a man that the Kurdish military says is an American member of the Islamic State group shortly after he turned himself in to Kurdish fighters in northern Iraq, Monday, March 14, 2016. The circumstances of the surrender were not fully disclosed but it marked a rare instance in which an IS fighter voluntarily gave himself up to Iraqi or Kurdish forces in Iraq. (Kurdish fighter via AP)</p>

IRBIL, Iraq (AP) — A Palestinian-American member of the Islamic State group on Monday gave himself up to an Iraqi Kurdish military unit in the country's north, an Iraqi Kurdish general said.

The circumstances of the surrender were not fully disclosed but it marked a rare instance in which an IS fighter voluntarily gave himself up to Iraqi or Kurdish forces in Iraq. In neighboring Syria, meanwhile, Syrian Kurdish fighters battling the Islamic State, have told The Associated Press that they are seeing an increase in the number of IS members surrendering following recent territorial losses.

Maj. Gen. Feisal Helkani of the Iraqi Kurdish peshmerga forces, which are playing a key role along with the Iraqi military in battling the extremist IS group, identified the individual who surrendered as Mohammed Jamal Amin.

Helkani said the man is a Palestinian-American who has been fighting with IS in Iraq and who surrendered on Monday morning near the town of Sinjar, which was retaken by Iraqi forces from IS militants late last year.

According to Helkani, Amin was carrying with him a large amount of cash, three cell phones and three forms of identification, including a U.S. driving license. The IS fighter is currently being held by the peshmerga troops for interrogation, Helkani added.

The Iraqi Kurdish general did not provide further details or a hometown or state for the Palestinian-American.

Last week, Brett McGurk, President Barack Obama's envoy to the U.S.-led coalition fighting the Islamic State group, announced that IS had lost more than 3,000 square kilometers (1,158 square miles) of territory in Syria and more than 600 fighters over the past month.

In Iraq, the Islamic State group has claimed responsibility for a series of suicide attacks that have killed more than 170 people over the past few weeks. Iraqi officials also say the group has launched a number of chemical weapons attacks.

Local officials in the town of Taza in Iraq's north say a recent attack injured more than 600 people. The attacks follow a string of advances by Iraqi forces backed by U.S.-led airstrikes, including in the western city of Ramadi, which was declared fully "liberated" by Iraqi and U.S.-led coalition officials last month.

IS still controls large swaths of land in Iraq and Syria and has declared an Islamic "caliphate" on the territory it holds. The extremist group also controls Iraq's second largest city, Mosul, as well as the city of Fallujah, 40 miles (65 kilometers) west of Baghdad.