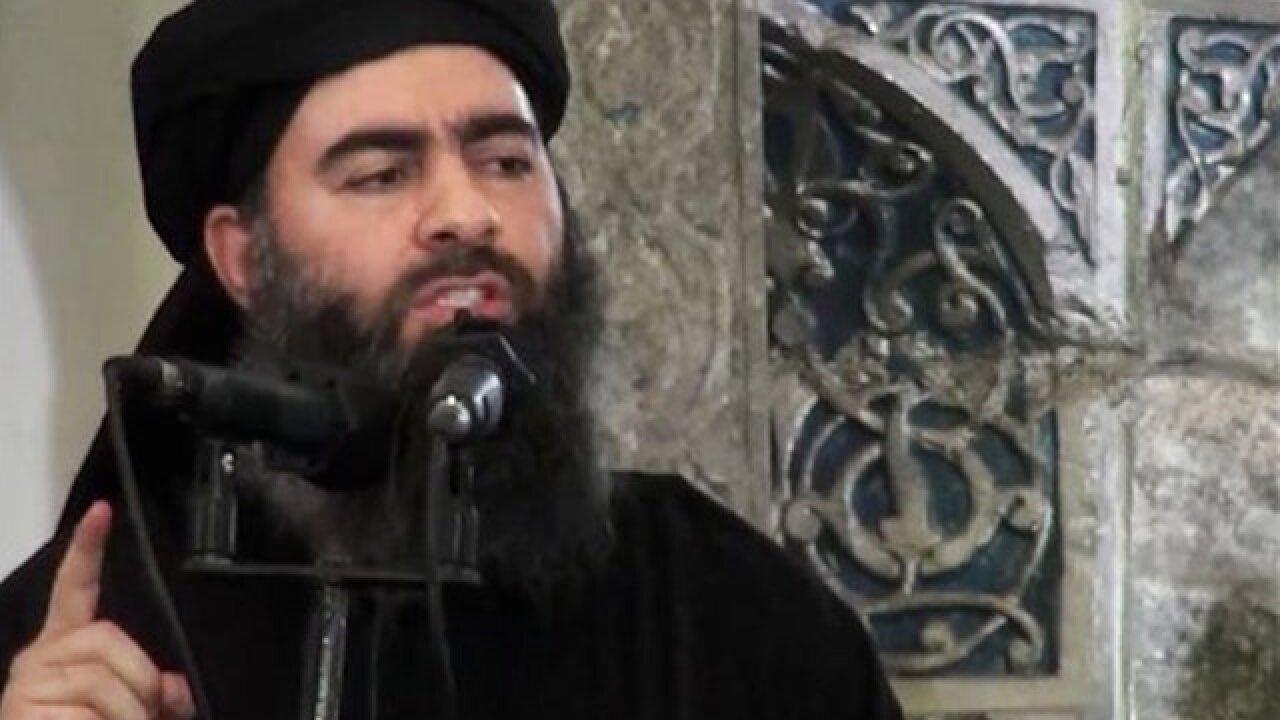 Copyright Associated Press
Uncredited
<p>FILE - This file image made from video posted on a militant website Saturday, July 5, 2014, purports to show the leader of the Islamic State group, Abu Bakr al-Baghdadi, delivering a sermon at a mosque in Iraq during his first public appearance. The Islamic State group has released a new message purportedly from its reclusive leader, claiming his self-styled ìcaliphateî is doing ìwellî despite an unprecedented alliance against it. (AP Photo/Militant video, File)</p>

BEIRUT (AP) — The Islamic State group on Saturday released a new message purportedly from its reclusive leader, claiming that his self-styled "caliphate" is doing well despite an unprecedented alliance against it and criticizing the recently announced Saudi-led Islamic military coalition against terrorism.

In the 24-minute audio, Abu Bakr al-Baghdadi said airstrikes by the international coalition only increase his group's determination and resolve. The message was al-Baghdadi's first since May, and comes amid battlefield setbacks that IS has recently faced.

Meanwhile, a U.S.-backed coalition of rebels in Syria — including Syrian Kurdish, Arab and Christian groups — captured a major dam on the Euphrates River from the Islamic State group as part of the coalition's march on IS-held areas in northern Syria.

The coalition, known as Syria Democratic Forces, announced earlier this week a new offensive aimed at cutting supply lines between IS strongholds in the country's north. The SDF said it seized the Tishrin Dam, which supplies much off northern Syria with electricity, on Saturday.

An SDF spokesman told AP earlier this week that his forces are also trying to cut the supply lines between the Islamic State's de-facto capital of Raqqa and the group's stronghold of Manbij in northern Syria.

The SDF, dominated by the main Kurdish militia in Syria known as YPG, or People's Protection Units, has become a main force in fighting IS.

The Islamic State group has come under pressure in Syria and Iraq, where it has declared its self-styled Islamic caliphate on territory that the militant group controls. It lost the town Sinjar in Iraq last month, and areas across the border in Syria at the same time. Iraqi government troops are also advancing in the Islamic State-held city of Ramadi, the provincial capital of the sprawling Anbar province, Iraq's Sunni heartland.

Airstrikes by the U.S.-led coalition and Russia in Syria have also destroyed Syrian oil facilities and killed several IS leaders in recent weeks.

"It is unprecedented in the history of our Ummah (Islamic nation) that all the world came against it in one battle, as it is happening today. It is the battle of all the disbelievers against all the Muslims," al-Baghdadi said.

He said the U.S.-led alliance does "not scare us... nor do they scatter our resolve because we are the victors in any event."

Al-Baghdadi also taunted the United States for not putting boots on the ground. "They do not dare to come, because their hearts are full of fear from the mujahideen,"or holy warriors, he said.

"America and its allies dream of destroying the caliphate through their proxies and henchmen, and whenever an alliance of theirs fails or a tail is cut, they hasten to establish another, until they recently declared the Salouli (Saudi) alliance that was falsely called Islamic," al-Baghdadi added.

If the Saudi-led alliance was truly Islamic, then it would fight the Syrian army and its Russian "masters," as well as Shiites and Jews, al-Baghdadi said.

In mid-December, Saudi Arabia announced the new, 34-member alliance against terrorism, to be based in the kingdom's capital, Riyadh. But Shiite powerhouse Iran is not part of the new coalition; neither are Iraq and Syria, whose forces are battling to regain ground from the Islamic State group and whose governments are allied with Tehran.

He threatened Israel by saying, "we haven't forgotten you" and "we are getting closer to you" every day. To Israeli Jews, he said that they "will hide behind trees and stones" from the IS.

He also urged Muslims world over to join the IS fight, saying it is their Islamic duty to rise up everywhere.

The authenticity of the audio could not be independently confirmed but it was posted on IS-affiliated websites and Twitter as past IS messages. Also, it was produced by the al-Furqan Media Foundation, IS media arm.