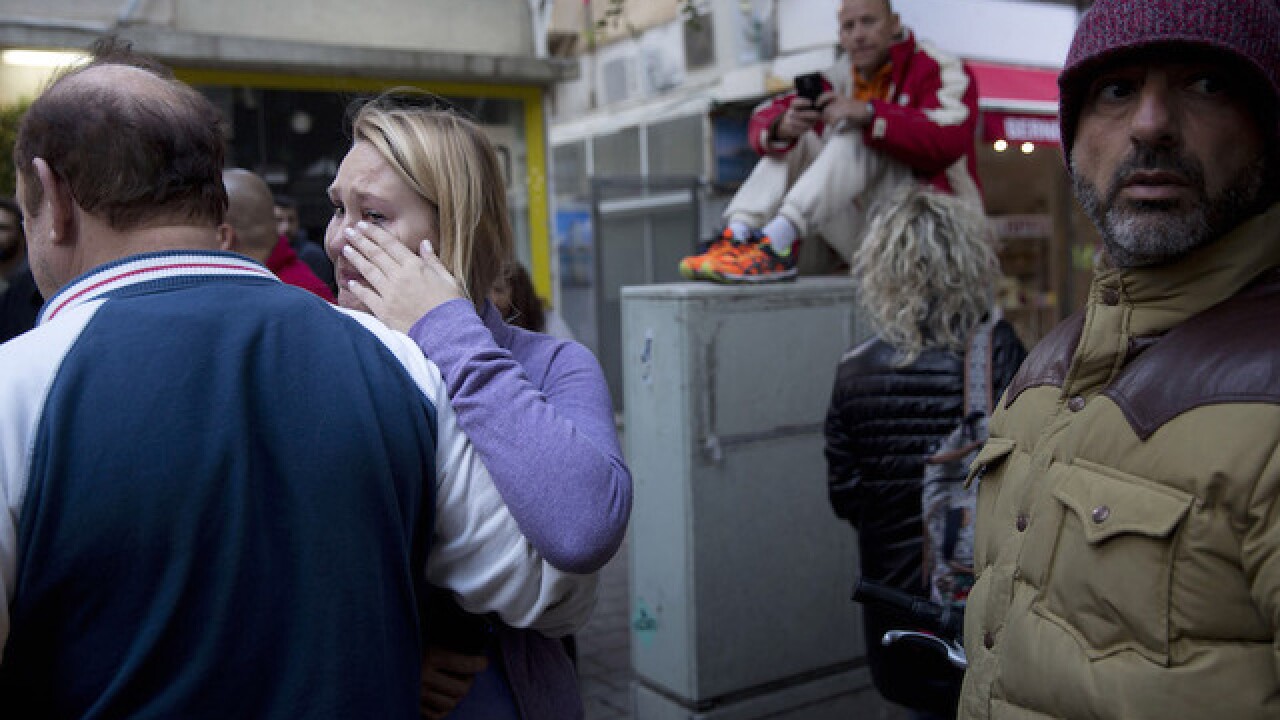 Oded Balilty
<p>An Israeli woman reacts at the scene of a shooting attack in Tel Aviv, Israel, Friday, Jan. 1, 2016. A gunman opened fire at a popular bar in the central Israeli city, killing two and wounding at least three others before fleeing the scene, police said. (AP Photo/Oded Balilty)</p>

A gunman opened fire at a popular bar in the central Israeli city of Tel Aviv on Friday afternoon, killing two people and wounding at least three others before fleeing the scene, police said.

The motive for the shooting spree, which took place on a busy main street, was not immediately clear and it was not known if the shooter was a Palestinian attacker, if it was a gangland shooting or if there was some other motive, police said.

Israeli Channel 10 TV showed CCTV footage of the incident, obtained from a health food shop next to the bar. It shows a man with short hair, glasses and a black bag over his shoulder scooping up some nuts, putting them in a plastic bag, then emptying them back. The footage then shows the man walking toward the entrance of the store, placing his backpack on a shopping cart and taking a gun out of it. He then steps outside and starts shooting, after which he runs away.

Channel 10 and other Israeli media later Friday claimed the attacker's identity was known to authorities. The station's defense analyst Alon Ben-David said the gunman was an Israeli Arab and that the attacker's father had seen his son on TV and notified authorities.

Ben-David said the shooter's calm demeanor and the way he was holding and shooting the gun show he was well trained. According to Ben-David, a Quran, the Muslim holy book, was found later in the attacker's bag.

The Associated Press could not independently confirm those details.

Police spokeswoman Luba Samri said five people were wounded, two of whom died in hospital. She said a massive manhunt was underway for the shooter. Large police forces were deployed at the scene.

The attack comes amid more than three months of almost daily Palestinian attacks against Israeli civilians and soldiers. On the Israeli side, 21 people have died, mostly in stabbings, shootings and car-ramming attacks. At least 131 Palestinians have been killed by Israeli fire, 90 of them identified by Israel as assailants. The rest died in clashes with security forces.

Tel Aviv Mayor Ron Huldai visited the wounded in hospital and later said he spoke with those who were able to talk. He said that inside the bar, "friends were celebrating a birthday and a man opened fire at them from the outside."

He said "lessons will be learned" to improve security.

Channel 10 also reported that the shooter used an assault rifle and fired about 30 shots. It said that Israeli police and special forces were going house to house in the area, searching for the gunman.

Later, police said an Arab Israeli man was found near the shooting scene with a gunshot wound and later died of his wounds in hospital. The police said an investigation is underway and that it is not clear whether that man is in any way connected to the bar shooting.