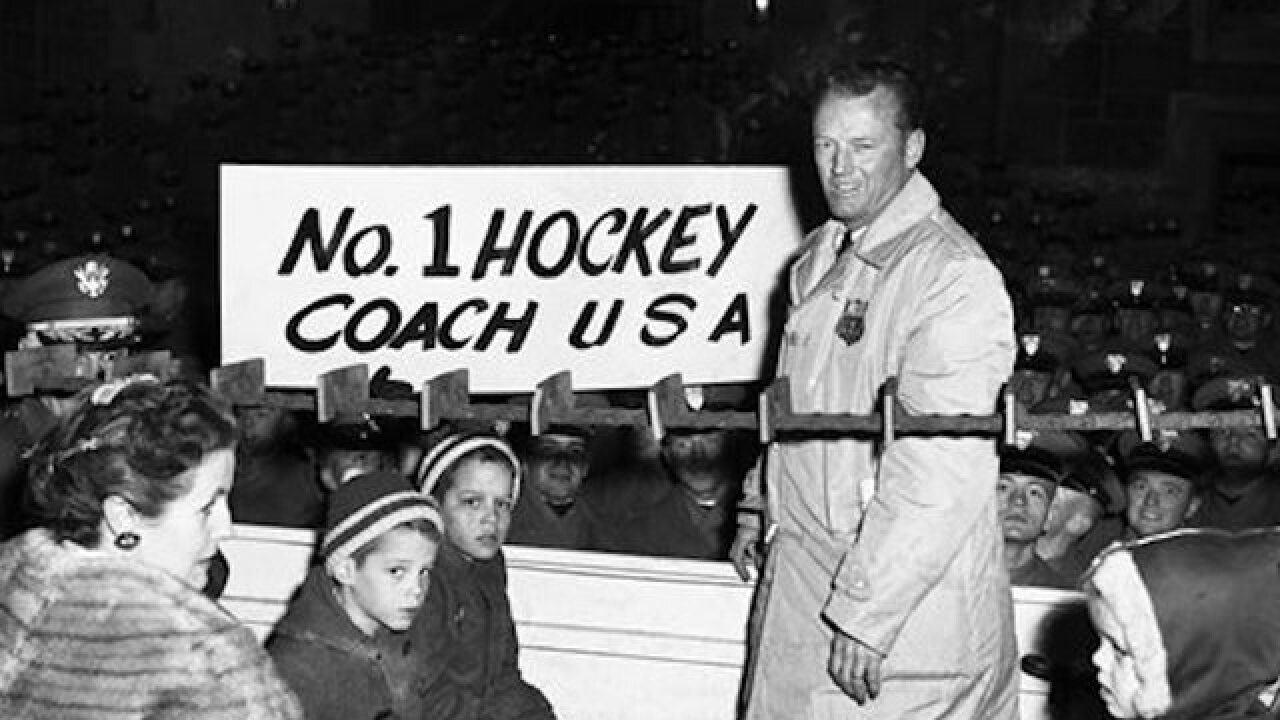 Copyright Associated Press
<p>In this Feb. 29, 1960 file photo, U.S. Olympic Hockey coach Jack Riley is welcomed back to U.S. Military Academy at West Point, N.Y. Riley, a former Army hockey coach who won guided the U.S. team to its first Olympic gold medal in 1960, has died. He was 95. The U.S. Military Academy announced in a statement that Riley died Wednesday, Feb. 3, 2016 in Massachusetts. No cause of death was provided. (AP Photo/File)</p>

He died Wednesday on Cape Cod in Massachusetts, the U.S. Military Academy said. He regularly attended Army home games into his early 90s.

"He lived a great life, and although he is known as a hockey coach to many people, he was a great husband, father, grandfather and friend to all," said son Brian Riley, the current Army hockey coach.

Jack Riley compiled a 542-343-20 record at West Point during a 36-year college coaching career that started in 1950, transforming the Black Knights into an Eastern power. He led the Black Knights to 29 winning seasons, including a school-record 28 victories during the 1983-84 season.

"He did have a little bit of an Irish temper at the rink and on the golf course," Brian Riley said. "He was a fierce competitor. He did not like to lose, but at home he was a softie."

Riley was born in the Boston area and played hockey at Dartmouth. He and was a member of the 1948 U.S. Olympic team. Twelve years later, he coached the U.S. team to the gold medal, with the Americans upsetting the Soviet Union at the 1960 Squaw Valley Games in California.

"He pushed his guys," Brian said. "For the 1960 Olympics he brought his team back to West Point to train. He knew on paper they probably weren't the favorites, but he was going to have the best-conditioned team and kind of skated the guys into the ice to make sure they were going to be in great shape. Obviously, they were."

The West Point men's hockey team has been coached by a member of the Riley family since Jack took the job in 1950. His son Rob succeeded him for 18 seasons and Brian became coach in 2004-05.

Jack Riley said of all his accomplishments he was perhaps proudest of being a Navy pilot in the Pacific theater during World War II.

"People always talk about my dad and the Olympics, but if you wanted to see a real gleam in my father's eyes, let him talk to you about serving in the Navy and being a Navy pilot," Brian said. "He took immense pride in serving his country."