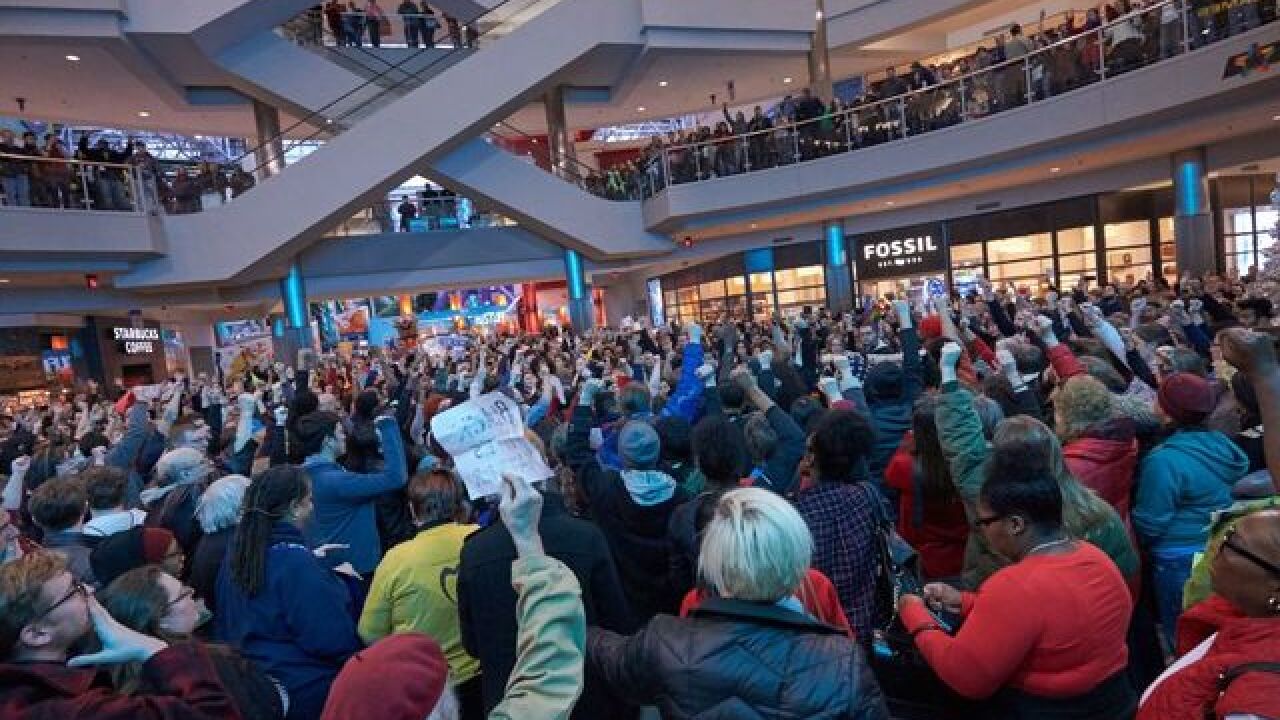 MINNEAPOLIS (AP) — A judge ruled Tuesday that several local Black Lives Matter organizers cannot demonstrate at the Mall of America on the busy shopping day before Christmas Eve, but she said she couldn't stop others from attending the protest.

Lawyers for the nation's largest mall had requested a temporary restraining order to prevent the Black Lives Matter protest planned for Wednesday, in hopes of avoiding a repeat of the massive demonstration that disrupted business and closed stores in the mall last December.

Hennepin County District Court Judge Karen Janisch barred three protest organizers named as defendants in the mall's lawsuit from attending the demonstration, but she limited her order to them. The mall had sought to block the entire Black Lives Matter group from protesting.

The judge also denied the mall's request to order the organizers to remove posts about the protest from social media and to alert followers that the demonstration had been canceled. The organizers' attorney argued during a Monday hearing that those demands were clearly unconstitutional.

Mall attorney Susan Gaertner had said a restraining order would make it clear that the mall prohibits demonstrations on its own private property.

Gaertner said Tuesday she was pleased with the ruling.

"This ruling makes it clear that even before today, Mall of America has the right to say, 'No, you cannot demonstrate here,' and that it is a violation of the law to do so," Gaetner said. She said she hopes that not only the organizers but anyone else who is thinking of coming to the mall "and breaking the law will think better of it."

With the judge's limited ruling, it's unclear what additional steps the mall may take to curtail the protest. Deputy Bloomington Police Chief Denis Otterness declined to discuss any additional security measures the mall may put in place Wednesday.

Kandace Montgomery, one of three organizers barred by the judge's order, says the group isn't deterred by the ban. She declined to say if she or her fellow organizers still planned to go to the mall, but she said she expects at least 700 people to show up.

Protest organizers want to draw attention to the Nov. 15 police shooting of a black Minneapolis man, Jamar Clark, who died a day later. They also want to ramp up the pressure on investigators to release video of the shooting. Authorities say they won't release it while state and federal investigations are ongoing.

Kandace Montgomery, one of three organizers barred by the judge's order, said the group isn't deterred by the ban. She declined to say if she or her fellow organizers still planned to go to the mall, but she said she expects at least 700 people to show up.

"We are a leader-full organization. Just barring three of us does not mean that you've stopped our work," she said.

Thousands of demonstrators descended on Mall of America last December, angry over the absence of charges following the police killings of unarmed black men in New York City and Ferguson, Missouri. Stores in the mall had to close, and dozens of people were arrested.

Gaertner repeatedly stressed at Monday's hearing that the mall's opposition to the Black Lives Matter protest is not about their message, but the venue and the protest's potential for disrupting last-minute holiday shopping.

Police say Clark, 24, died during a struggle with officers. Others, though, say Clark was handcuffed at the time.

Protest organizers want a special prosecutor to be appointed in Clark's death rather than have a grand jury decide whether to charge the officers involved in his death. In addition, they want federal terrorism charges to be brought against four men who shot at protesters outside a Minneapolis police precinct last month, injuring five.