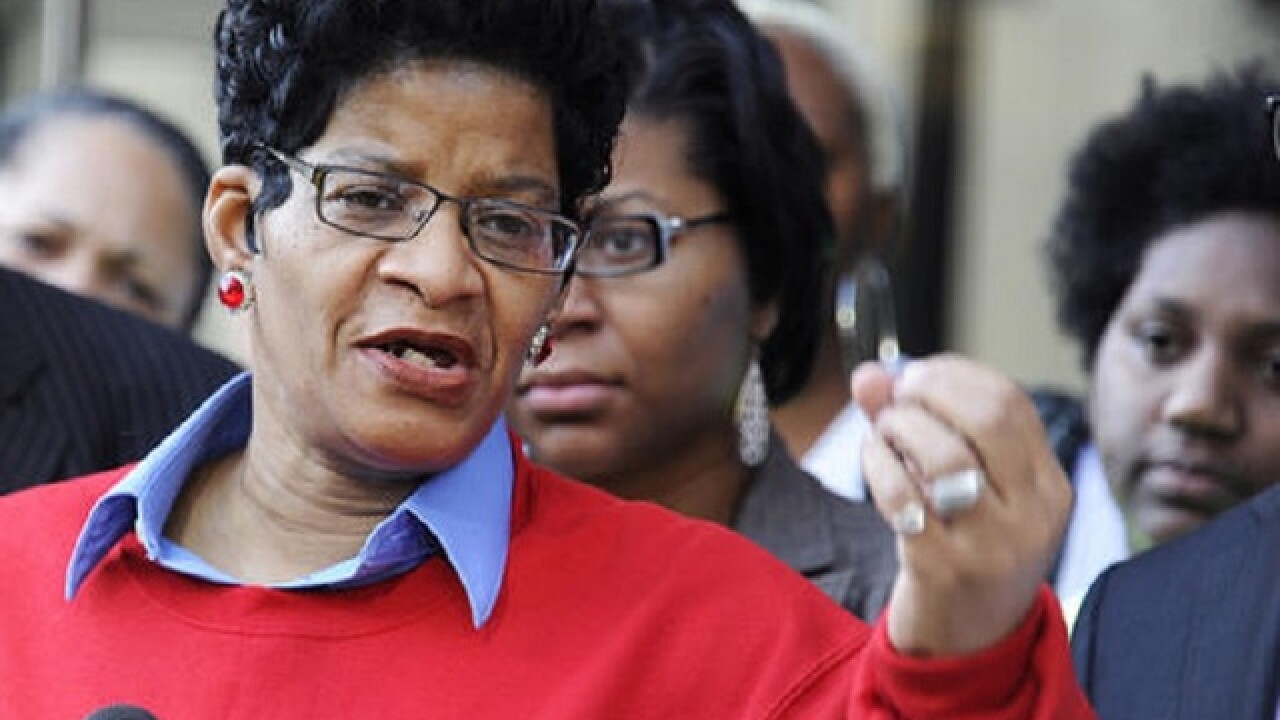 Pat Sullivan
<p>Geneva Reed-Veal, mother of Sandra Bland, who were found dead in a Texas county jail three days after a confrontation with a white state trooper, speaks to the media as she leaves the federal courthouse Thursday, Feb. 18, 2016, in Houston. A federal judge heard arguments Thursday on whether to delay a wrongful death lawsuit Bland�s family has filed until the Texas state trooper who arrested her last summer is tried on a criminal charge. (AP Photo/Pat Sullivan)</p>

By: Associated Press
Posted at 9:11 PM, Feb 18, 2016
HOUSTON (AP) — The Texas state trooper who pulled over Sandra Bland and now faces a perjury charge in the case remains on the payroll even as a federal judge heard arguments Thursday on whether a wrongful death lawsuit should be delayed until he's tried in criminal court.
Brian Encinia deserves a fair criminal trial on the misdemeanor, said Seth Dennis, an assistant Texas attorney general.
"Let the criminal case play out," Dennis urged the judge.
U.S. District Judge David Hittner told attorneys he wants to move the civil case along, but offered no timetable for a decision on the delay request.
The family of Bland, a 28-year-old black woman, sued after Bland died last summer in a jail following her arrest stemming from a confrontational traffic stop on the outskirts of Houston. Her death was ruled a suicide. The case provoked national outrage and drew the attention of the Black Lives Matter movement, with protesters linking Bland to other black suspects who were killed in confrontations with police or died in police custody.
Lawyers for Bland's mother, Geneva Reed-Veal, said they oppose any delay in the lawsuit trial, now set for January. Her lead attorney, Cannon Lambert, said only "extraordinary circumstances" should merit a trial delay and state lawyers were unable to show him any in this case.
Lambert amended the lawsuit to drop the Texas Department of Public Safety as a defendant. Encinia remains a defendant.
"Mr. Encinia is effectively DPS," Lambert said afterward.
State attorneys have insisted the Department of Public Safety has constitutional immunity from such lawsuits and that Encinia has similar protection.
Encinia, although indicted last month, has not yet been arraigned on the perjury charge. He's accused of lying about his July 10, 2015, confrontation with Bland.
Hours after his indictment, the Department of Public Safety said it would begin the process of firing the trooper. Encinia, who had been on paid desk duty, has been suspended with pay since the agency announced it would move to terminate him.
Department of Public Safety spokesman Tom Vinger said in an email Thursday that there is no timetable on when Encinia will be formally let go, but that decision is now in the hands of Director Steve McCraw.
Encinia's lawyer in the criminal case, Larkin Eakin said he "remains on the payroll with state employee benefits" and hasn't received formal notice from the agency's director that he's been dismissed. Troopers can appeal firing decisions.
"A letter of termination will trigger the appeals process to the Texas Public Safety Commission, which, as I understand the process, can reverse, uphold or take no action on the director's decision," Eakin said in an email Wednesday. "Once the commission issues its decision, the next step in the appeal process is an action in a Texas district court."
Department of Public Safety records show firings in recent years have taken considerable time, with most formal terminations coming months — or even years — after the incidents that led to the dismissals.
Encinia stopped Bland for making an improper lane change near Prairie View A&M University, her alma mater, where the Chicago-area woman had just interviewed and accepted a job.
Dashcam video from Encinia's patrol car shows the traffic stop quickly became confrontational and Bland was arrested for assault and taken to the Waller County jail. Three days later, she was found hanging from a jail cell partition with a plastic garbage bag around her neck.
Bland's family has said they were working to get about $500 for her bail when they learned of her death.
A grand jury last month tied its perjury indictment of Encinia to his statement in an affidavit where he said Bland was combative and uncooperative after he stopped her and that he removed her from her car to further conduct a safer traffic investigation.
In December, a grand jury declined to indict Waller County sheriff's officials or jailers.
On Thursday, Judge Hittner ordered the FBI to give him a redacted report on the Texas Rangers' investigation of the Bland case that attorneys for Bland's mother are demanding. Hittner said he wanted to review the report before making it available to the family's legal team. Prosecutors said they would get it to him Monday.
Hittner also ordered state lawyers to allow the Bland attorneys to view the original traffic stop and jail videos. Lambert said he was concerned about jumps or glitches in the videos and wanted to ensure they hadn't been tampered with. Hittner said the family's attorneys could see the recordings, but not test them.
The judge also was considering a request from a lawyer for Waller County seeking to have two county jailers who are defendants in the lawsuit tried separately. Nearly a dozen other employees in the county, about 50 miles northwest of Houston, have been added as defendants by Lambert.
Bland's case has surfaced in the presidential campaign with her mother, Reed-Veal, making appearances with Democratic candidate Hillary Clinton.
Associated Press 2016