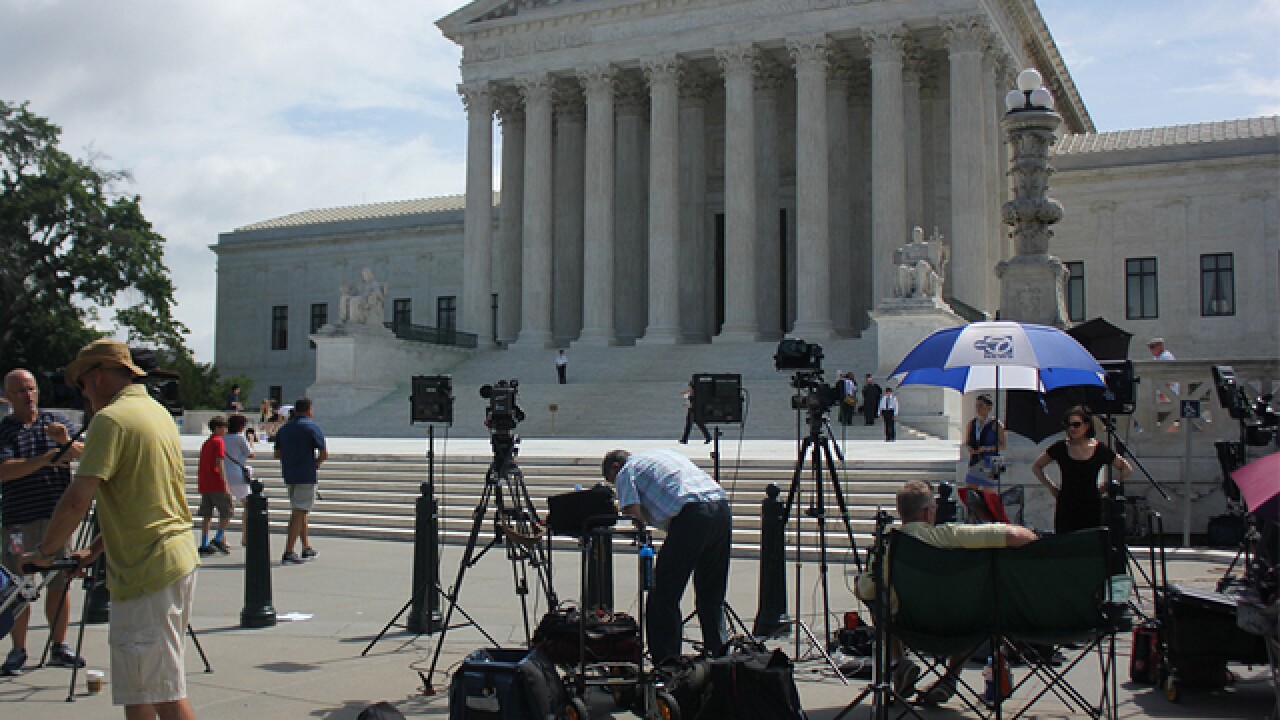 Sarah Fulton/SHFWire
<p>Broadcast news teams pack up their equipment Thursday. They left after the Supreme Court did not issue opinions in the highly anticipated marriage equality or health care cases.</p>

The justices turned away the state's appeal of decisions striking down the 2013 fetal heartbeat law as unconstitutional. The law never took effect, and abortion-rights supporters said it was the strictest anti-abortion measure in the country.

The high court last week rejected Arkansas' bid to enforce its own fetal heartbeat law, banning some abortions at 12 weeks. Both measures had been struck down by a unanimous panel of three judges appointed by President George W. Bush to the St. Louis-based 8th U.S. Circuit Court of Appeals.

"We knew it was unlikely and it came as no surprise," North Dakota Attorney General Wayne Stenehjem said of the high court's refusal to review the case.

The Supreme Court gets about 7,500 requests each year but takes on fewer than 100 cases.

"It was a long shot," Stenehjem said. "And it's the end of our litigation on this issue. Even some of staunchest pro-life groups agree there isn't much more we can do at this point."

The appeals panel judges said the laws were inconsistent with the standard set by the Supreme Court that generally ties abortion restrictions to the viability of the fetus. But they urged the Supreme Court to re-evaluate its abortion cases to take account of changes in medicine and science, and the wishes of elected state lawmakers. The current framework "discounts the legislative branch's recognized interest in protecting unborn children," Judge Bobby Shepherd wrote for the panel, which included Judges William Benton and Lavenski Smith.

North Dakota's Republican-dominated legislature approved the law in 2013, though it was quickly put on hold after the state's lone abortion clinic, the Red River Clinic in Fargo, filed a lawsuit that July.

Republican Gov. Jack Dalrymple has called the law "a legitimate attempt by a state Legislature to discover the boundaries of Roe v. Wade." But opponents called it an attempt to shutter the clinic that is backed in its legal fight by the Center for Reproductive Rights.

Nancy Northrup, president and CEO of the New York-based group, praised the high court's refusal to review the law.

"This utterly cruel and unconstitutional ban would have made North Dakota the first state since Roe v. Wade to effectively ban abortion," she said in a statement.

North Dakota lawmakers set aside $400,000 to defend lawsuits arising from a spate of new abortion laws in 2013, and the Legislature added another $400,000 last year. Records obtained by The Associated Press show the state had used $320,029 to defend the abortion laws as of December, most of which was spent on the fetal heartbeat measure.

No new abortion measures were introduced by the Legislature last year, after two of the most ardent anti-abortion state lawmakers were ousted by voters in the highly religious red state.

"Lawmakers need to know that citizens care about all issues, not just one," said Stenehjem, a Republican seeking the nod for governor to replace Dalrymple, who is not seeking re-election.

The Fargo clinic, which performs about 1,250 abortions a year, is served by out-of-state physicians licensed to practice in North Dakota. The nearest other abortion clinics are four hours south to Sioux Falls, South Dakota, and four hours away in Minneapolis.