Kanye West criticizes Obama and praises Trump: 'The mob can't make me not love him' 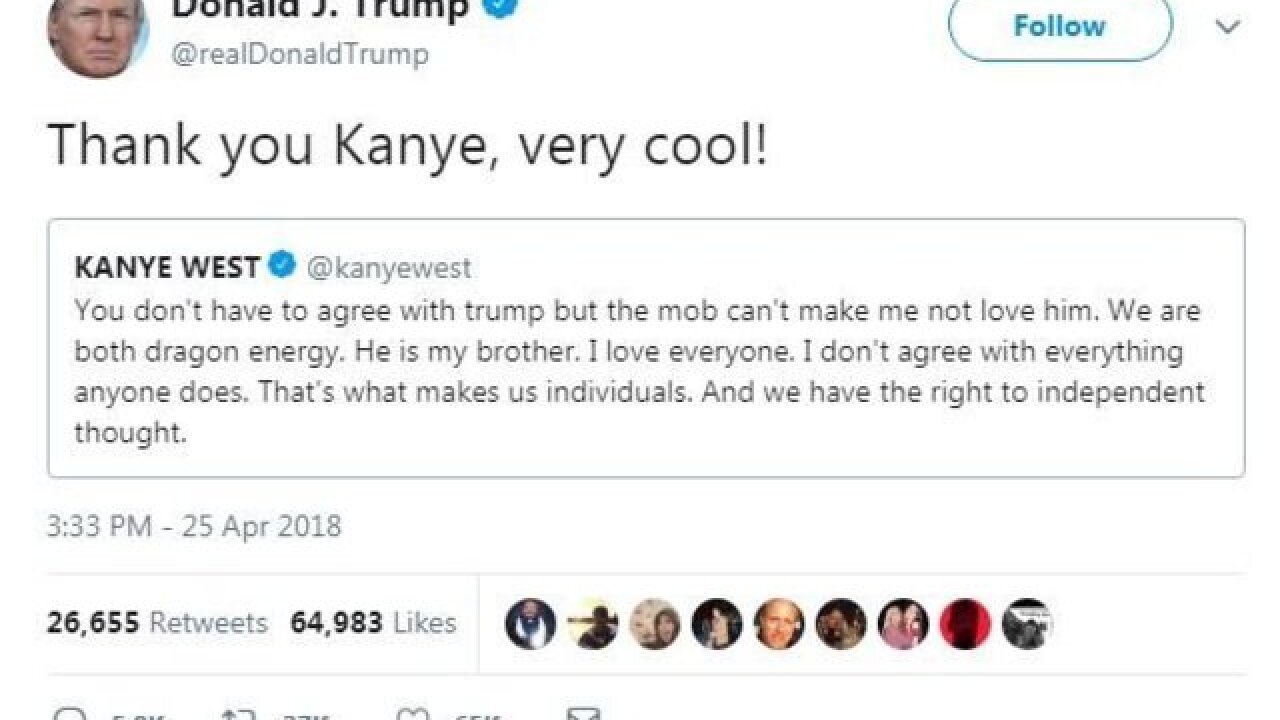 Copyright 2018 Scripps Media, Inc. All rights reserved. This material may not be published, broadcast, rewritten, or redistributed.
@realDonaldTrump/Twitter
<p>Kanye West remained defiant Wednesday amid mounting backlash from fans over the rapper's positive words about President Donald Trump, tweeting a picture of himself wearing a "Make America Great Again" hat with the caption, "we got love."</p>

"Obama was in office for eight years and nothing in Chicago changed," he  tweeted  on Wednesday.

"You don't have to agree with trump but the mob can't make me not love him," West tweeted earlier Wednesday. "We are both dragon energy. He is my brother. I love everyone. I don't agree with everything anyone does. That's what makes us individuals. And we have the right to independent thought."

Trump also tweeted, "MAGA," which stands for "Make America Great Again," in response to a photo West tweeted of his Trump-signed hat.

The series of tweets comes after fans lamented  a report  this week from Hot 97 radio host Ebro Darden that West recently told him, "I love Donald Trump," and defended a previous tweet in which the rapper complimented conservative commentator Candace Owens.

But less than an hour later West followed up with another tweet -- an apparent request from his wife Kim Kardashian West, who is a critic of Trump -- and clarified that he doesn't agree with everything Trump does.

"my wife just called me and she wanted me to make this clear to everyone. I don't agree with everything Trump does. I don't agree 100% with anyone but myself," he wrote.

But he added that he also loves former Democratic presidential nominee Hillary Clinton.

White House press secretary Sarah Sanders was asked on Wednesday about West's admiration for the President and whether the pair plan to meet.

"I don't know of any conversation that they've had over the last week or so," Sanders said. "I'll keep you posted if that changes."

West  famously met with Trump  in December 2016 at Trump Tower during the then-President-elect's transition period and that encounter also generated intense backlash from West's fans.

He defended the meeting in a series of  now-deleted tweets  and wrote,"I wanted to meet with Trump today to discuss multicultural issues ... I feel it is important to have a direct line of communication with our future President if we truly want change."

West, who was hospitalized in November 2016 due to exhaustion, shocked fans in California when he abruptly ended a concert with a rant in which he proclaimed that if he had voted, he would have voted for Trump.