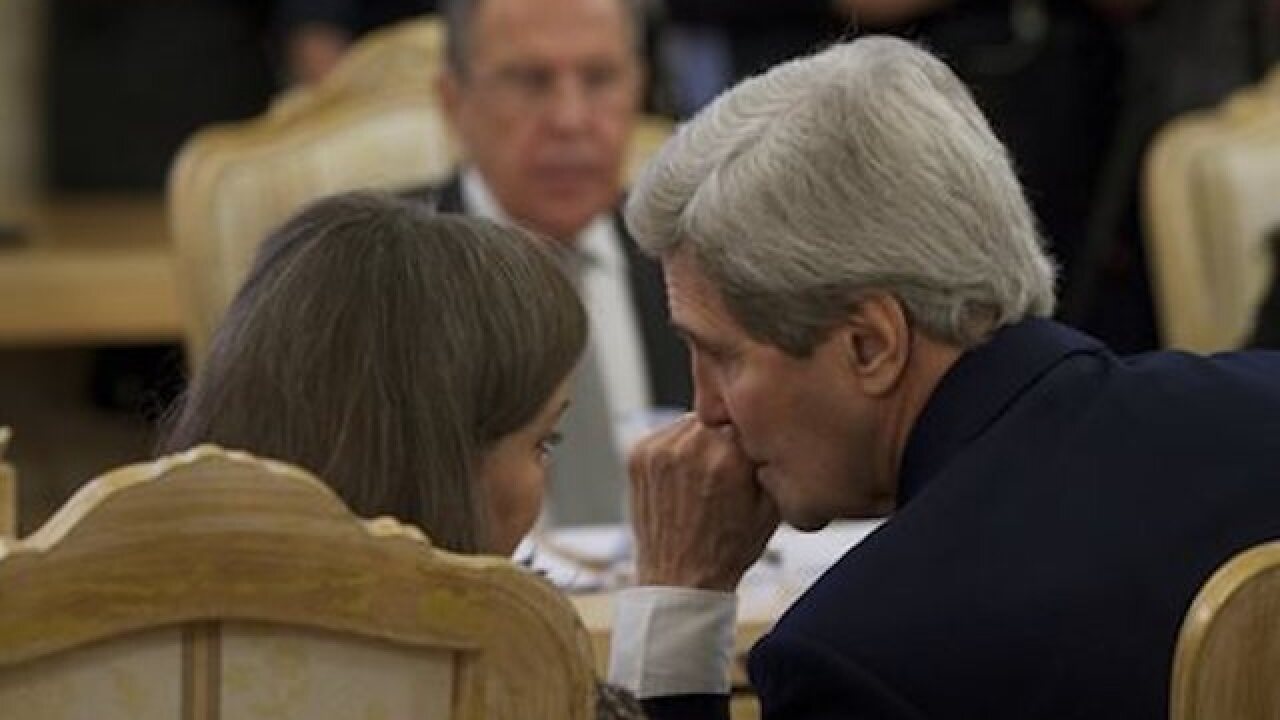 MOSCOW (AP) — The United States and Russia need to find common ground to end Syria's civil war and restore stability in eastern Ukraine, U.S. Secretary of State John Kerry said Tuesday, as he met with Russian President Vladimir Putin to try to narrow gaps in the countries' approaches to the crises.

"Together the United States and Russia have the ability to make a significant difference here," Kerry told Putin as they began meeting at the Kremlin. Perhaps seeking to ease some tension in what were expected to be tough talks, Kerry praised Russia's role in seeking to create a political transition process for Syria with other nations, including the U.S.

"It's been a good cooperative effort and we're very appreciative for what has been achieved so far," Kerry said.

Putin offered only perfunctory comments at the start of the meeting, but spoke of several "outstanding issues" that need to be resolved.

"Even when there have been differences between us, we have been able to work effectively on specific issues," Kerry said. "Today, I hope we can find some common ground."

Russia and the U.S. are at odds over the mechanics of a political transition aimed at halting the war in Syria, as well as the military approach to fighting the Islamic State group. The results of Tuesday's meetings will determine whether or not a new international diplomatic conference on Syria will go ahead as planned Friday at the United Nations.

On Ukraine, the two countries are split over the implementation of a February agreement meant to end hostilities between the Kiev government and Russian-backed separatists in eastern Ukraine.

Lavrov noted "outstanding issues" with the U.S. on the Syrian political transition that is supposed to bring representatives of Syrian President Bashar Assad's government together with the opposition for negotiations by early January. And on Ukraine, Lavrov said the U.S. should use its influence with the government in Kiev to settle the conflict with the separatists by respecting a shaky cease-fire and moving ahead with political reforms in eastern Ukraine.

Kerry praised Moscow for having been "a significant contributor to the progress that we have been able to make" on Syria and said the U.S. and Russia both believe the Islamic State group must be eliminated.

"Russia and the United States agree that this is a threat to everybody, to every country," he said. "They are the worst of terrorists. They attack culture and history and all decency. It leaves no choice but for civilized nations to stand together, to fight and destroy them."

However, ahead of his arrival, Russia's foreign ministry said Moscow would be looking for a "revision" in U.S. policy of "dividing terrorists into 'bad' and 'good' ones." It also complained that the U.S. was unwilling to engage in "full-fledged coordination" between the two powers' militaries while both are conducting airstrikes in Syria.

Russia says its airstrikes since late September have targeted the Islamic State, but Western governments claim Moscow is bombing mostly moderate Syrian rebels and is primarily concerned with shoring up Assad.

Assad's future and his potential role in the political transition will be prime topics of Kerry's conversations with Putin and Lavrov.

Russia has consistently said Assad's future is for the Syrian people to decide, while the U.S. and many of its allies insist that he go, although they have softened their stance somewhat to allow Assad to play a temporary but as-yet undefined role in the transition. Syrian opposition groups, however, demand that Assad leave at the start of the process.

After his lengthy meeting with Lavrov, Kerry took time out for a brief stroll through Moscow's Stary Arbat pedestrian shopping street, stopping at stores including a Dunkin' Donuts under a light snow and exchanging greetings with Russians.

Kerry's trip to Moscow is his second to Russia this year. Since the first, President Barack Obama has seen Putin briefly twice at summits in Turkey and France.

Regarding Ukraine, Kerry is asking for Russia's full implementation of a February cease-fire in exchange for sanctions relief. That truce called for the removal of heavy weaponry from front lines, a Russian troop withdrawal, the release of detainees and full access for international monitors. But the cease-fire has become increasingly strained.

Lavrov, however, put the responsibility for a resolution squarely on Washington.

"Of course, we would like to continue the dialogue ... on how the United States can assist with the Ukrainian settlement," he said. "Given the U.S. influence on Kiev, it would be a positive factor."