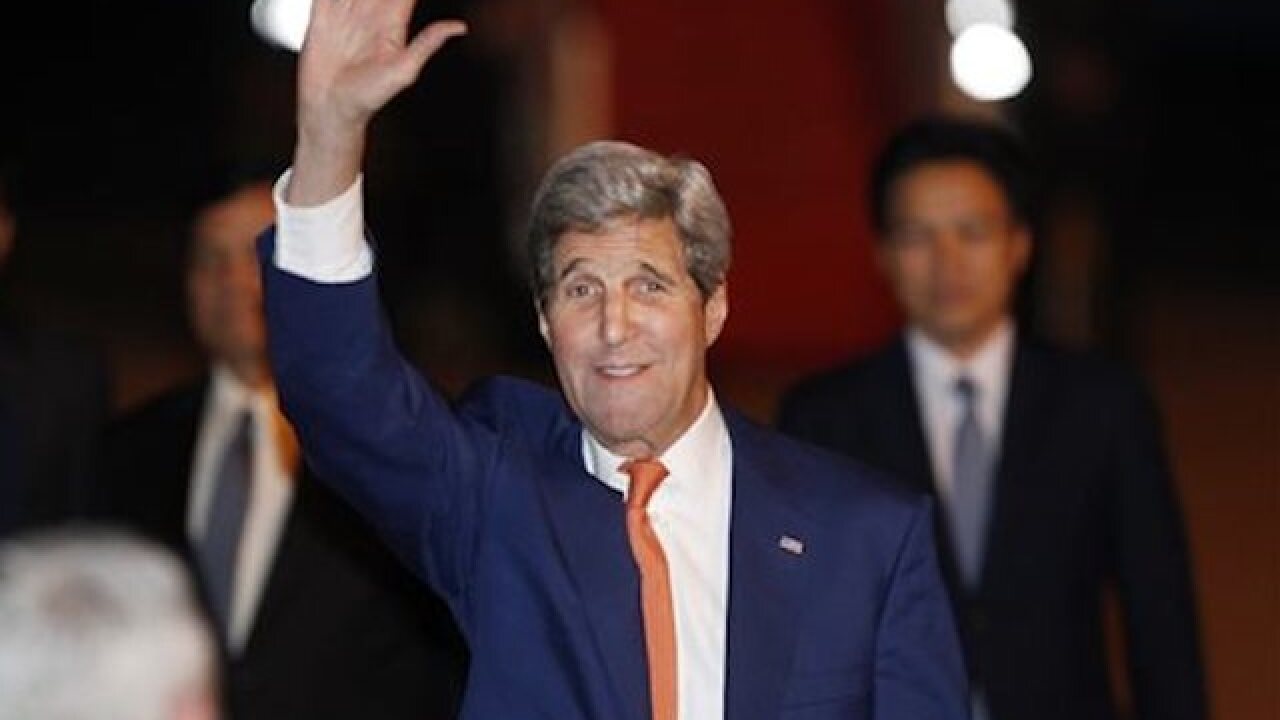 Monday's scheduled start in Geneva has been pushed back to Friday due to disagreements over which groups can represent the opposition.

Kerry said that during his short stay in Laos earlier Monday, he had spoken to the U.N. special envoy for Syria and the foreign ministers of Russia, Saudi Arabia, France and Turkey. The goal is to reach a consensus on how the talks will be run and a planned cease-fire would proceed.

"We're going to have the meeting and (the talks) are going to start," Kerry told reporters. "But what we are trying to do is to make absolutely certain that when they start everyone is clear about roles and what's happening so you don't go there and wind up with a question mark or a failure. You don't want to start Day One by not being able to make progress."

U.N. Special Envoy Staffan de Mistura, who announced in Geneva that the negotiations would start Friday, told reporters the sides will not talk directly to each other to begin with.

Kerry said any disagreements arising in the Geneva talks would be addressed by another meeting of the 20-odd member International Syria Support Group that is tentatively scheduled for Feb. 11.

Syrian officials have said they will make no concessions at the negotiating table. Opposition figures have complained that they are being forced into the talks.

Kerry said those recent statements reflect only "tensions" and "rumors." He dismissed suggestions of disunity among countries that back the opposition and said U.S. support for foes of Syrian President Bashar Assad remains solid.

"I think these are just tensions. These are things you hear as people are worried," he said.

Over the weekend, a senior official in Assad's ruling Baath party said the government would not make any new concessions in the peace talks at a time when the Syrian army with the help of Russia is making progress in different parts of the country.

"We are not going to give today what we did not give over the past five years," Hilal al-Hilal said late Saturday, during a visit to troops in areas they recently captured from insurgents outside the capital, Damascus.

Kerry said that claim was inconsistent with the positions of Russia and Iran. Assad's main backers have agreed to a U.N.-supported political transition process that is to form a new government over the next 18 months.

"That doesn't make sense," Kerry said. "If that's their attitude, the war does not end. That is not the Russian attitude. The Russians say (the Syrians) are going to go and they are going to negotiate."

He added, however, that nothing was certain. "We are going to know very quickly, in a month or two or three, whether these guys are serious."

Separately, Turkey's foreign minister, Mevlut Cavusoglu, warned that any participation of Kurdish forces in the Geneva talks would spell the end of the initiative.

Kerry, who met with the chief opposition negotiator in Saudi Arabia on Saturday, also addressed complaints from Assad foes who say the U.S. and others are giving in to demands from the government and its supporters.

"The position of the United States is and hasn't changed. We are still supporting the opposition, politically, financially and militarily," he said, adding later: "We completely empowered them. I don't know where this is coming from."

The opposition demands that Assad have no role in Syria's future, even during a transitional period. Russia, Iran and Syrian the government say that is to be determined by the Syrian people.

While maintaining that Assad cannot be part of the long-term future, the U.S. and others have dropped demands for his immediate removal and have agreed that the negotiations should decide his fate.

"It's up to the Syrians to decide what happens to Assad," Kerry said. "They are the negotiators and they will decide the future."

Kerry said he had explained to the opposition that the composition of a transitional government would have to be agreed by "mutual consent" from the two sides.

"I told them you have a veto, and so does he and so you're going to have to decide how to move forward," he said.

"I just don't buy into this public back and forth. It doesn't serve any purpose," he said. "We have to get to the negotiations without preconditions and get into the discussion of a cease-fire and humanitarian access ... and lay down the road ahead for the transition discussion itself and put to test whether they are serious. Or, if they aren't serious, war will continue."