Kerry off to Russia after Brussels attacks 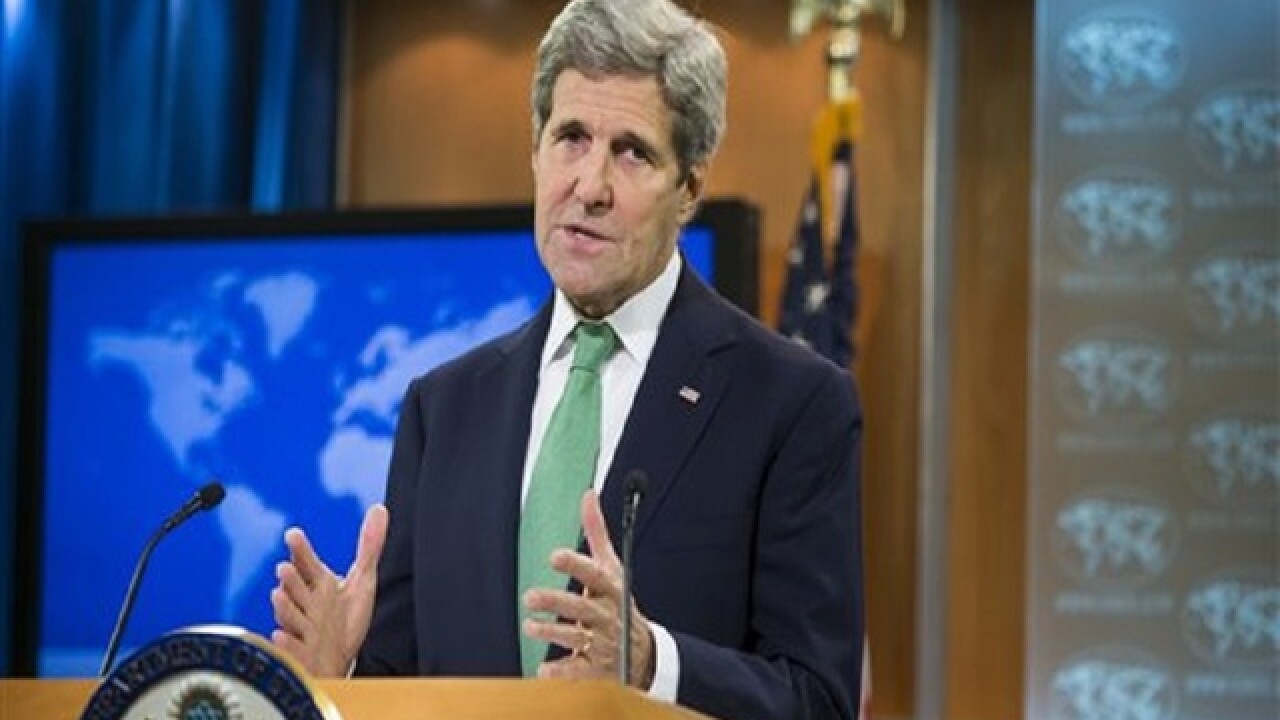 J. Scott Applewhite
<p>Secretary of State John Kerry speaks to reporters at the State Department in Washington, Thursday, March 17, 2016. Kerry has determined that the Islamic State group is committing genocide against Christians and other minorities in Iraq and Syria, as he acted to meet a congressional deadline. (AP Photo/J. Scott Applewhite)</p>

WASHINGTON (AP) — Secretary of State John Kerry is heading to Moscow for talks on Ukraine and Syria as the terrorist attacks in Brussels underscored the urgency of fighting the Islamic State group.
Kerry was to depart Washington late Tuesday after accompanying President Barack Obama to Cuba and speaking by phone from Havana with the Belgian foreign minister to offer condolences for the victims of the attacks and any assistance Brussels might need. The attacks were claimed by the Islamic State group and have highlighted the threat the group poses outside of its territory in Iraq and Syria.
In talks with Russian President Vladimir Putin and Foreign Minister Sergey Lavrov on Thursday, Kerry is to discuss the fragile truce in Syria that is hoped will spark UN-brokered peace talks amid disagreements over how to verify and respond to alleged violations, the State Department said. His visit was arranged following Putin's surprise announcement last week of Russia's partial military withdrawal from Syria.
Now that the truce is in place, Kerry will be seeking clarity from Putin and Lavrov as to where Russia stands on a political transition for Syria, particularly on the future of President Bashar Assad, according to U.S. officials. One senior official said it was now time to get down to "brass tacks" on Assad. The official was not authorized to preview Kerry's trip and spoke on condition of anonymity.
Russia on Monday warned the United States that it will start responding unilaterally to cease-fire violations in Syria if the U.S. refuses to coordinate rules of engagement against violators. The State Department, however, insisted that Moscow and Washington are working constructively to monitor the truce. The department also warned Russia against taking unilateral action in response to alleged violations.
The Russian military has accused the U.S. of dragging its feet on responding to Moscow's proposals on rules for joint monitoring of the Syria cease-fire and response to violations. It said that further delays are leading to civilian casualties.
Kerry also will call on Russia to do more to press pro-Russian separatists to comply with a ceasefire in eastern Ukraine. He is expected to raise the case of Nadezhda Savchenko, a Ukrainian pilot who was sentenced to 22 years in prison in Russia on Tuesday on charges the U.S. says are false. Savchenko was convicted of complicity to murder in the 2014 deaths of two Russian journalists in eastern Ukraine, opening a door to a possible prisoner swap between the two countries.
The U.S. has repeatedly called for Savchenko, who is also a member of parliament, to be released and did so again on Tuesday. The senior U.S. official said Kerry would encourage Russia to accept Ukraine's proposal for a swap.
"For nearly two years, Russia has unjustly detained Savchenko on charges that have no basis in fact and has denied her the basic protections of the rule of law," State Department spokesman John Kirby said. "She has reportedly endured interrogation, solitary confinement, and forced 'psychiatric evaluation'. (She) deserves to go home to her family and friends and to join her colleagues in the Rada in building a better future for their country. We reiterate our call on Russia to immediately release Savchenko and other unlawfully detained persons."
Associated Press 2016