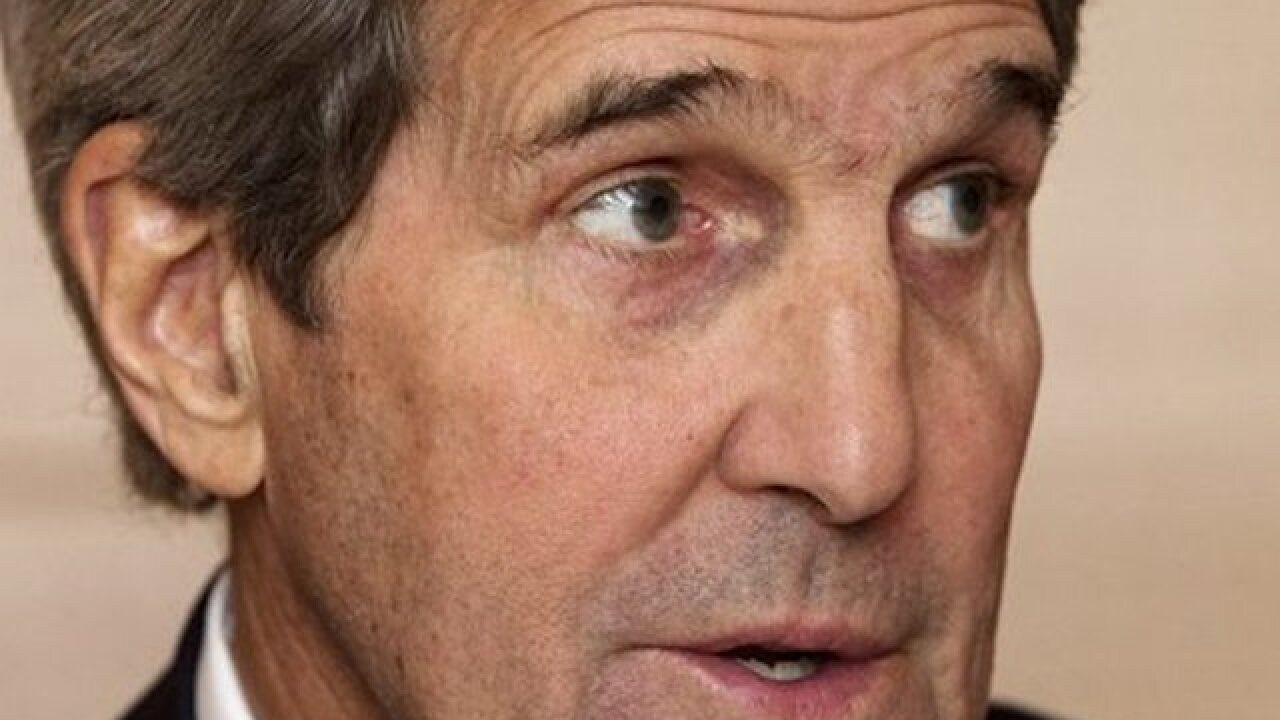 DAVOS, Switzerland (AP) — It's likely that some of the billions of dollars in sanctions relief granted to Iran under a landmark nuclear deal will go to groups deemed to be terrorists, U.S. Secretary of State John Kerry said on Thursday. But, he added, he doesn't believe Iran will be able to use the freed-up cash to boost funding of malign activities if it is serious about revamping its economy.

Kerry said on the sidelines of the World Economic Forum the U.S. or others can do little to prevent the now-unfrozen assets from getting into the hands of the Iran Revolutionary Guard Corps or "other entities" that Iran has supported in the past. But since nuclear-related sanctions were lifted on Iran last weekend, Kerry said, there is no evidence yet to suggest such transfers have occurred.

"I think that some of it will end up in the hands of the IRGC or other entities, some of which are labeled terrorists," he told CNBC television in an interview. "You know, to some degree, I'm not going to sit here and tell you that every component of that can be prevented. But I can tell you this: Right now, we are not seeing the early delivery of funds going to that kind of endeavor at this point in time."

In fact, Kerry later told a small group of reporters he understands the Revolutionary Guards are "already complaining that they are not getting the money." And he said there will be consequences if Iran is caught using the money to support terrorism.

"If we catch them funding terrorism, they're going to have a problem in the U.S. Congress and other people, obviously," he said.

"Whatever amount may flow to them, I am just trying to be honest, I can't tell people that, 'No, some amount might not,' but we don't believe that that is what has made the difference in the activities of Iran in the region," he said. "It is not money-based, and a whole lot of money isn't going to make a difference in a whole lot of places."

Kerry also said the administration believes the amount of money that might flow to terrorist groups will be limited because "the demands of Iran and of the Rouhani administration and of the supreme leader for development in their country are such that there is no way they can succeed in doing what they want to do if they are very busy funding a lot of terrorism and if they are putting money into that kind of enterprise and not into things they need to do to fund their economy."

In occasionally mocking tones, a group of Republican senators in Washington chided Kerry, telling reporters it was always clear to them that Iran would use its unfrozen assets to finance terrorism.

Led by Sen. Kelly Ayotte, R-N.H., the senators also said they plan to introduce legislation to impose tougher sanctions against Iran for conducting ballistic missile tests in violation of a U.N. resolution. They called the punishments proposed by the Obama administration for the testing "tepid and weak."

"Talk about stating the obvious. I mean, c'mon," Ayotte said of Kerry's remarks. "It's something we've all known from the beginning. (Iran) was supporting terrorism when their economy was crippled. They were choosing to put their money into guns, not butter, for their citizens before they had this economic relief.

"To have them actually now say, 'Well, we think some of this might go to terrorism.' Duh. I mean, really? It's been so obvious all along," she said.

Kerry repeated the Obama administration's argument that many critics of the Iran deal are inflating the amount of money that Iran now has access to. He said estimates of $100 billion to $150 billion are incorrect — $55 billion is more accurate, he said — because large chunks of that money is obligated to satisfy foreign debt.

In addition, he said Iran has more than $500 billion in infrastructure and development needs and must invest at least $100 billion to modernize its energy sector.

Earlier Thursday, Kerry rejected Iranian criticism of Washington's use of economic sanctions, saying they are imposed when appropriate.

Kerry said U.S. penalties against Iran and other nations have been "used judiciously and effectively" and will continue to be used in the future.

"We have made it very clear that we use sanctions when we think they are appropriate in order to counter behavior that we believe has broken the law or has challenged the United Nations Security Council or threatened the United States and we stand by our sanctions," Kerry told reporters.

"We think they have been used judiciously and effectively and we are looking to move on now to put to test the willingness of Iran and other countries in the region to try to reduce tensions and move in a different direction."

His comments came in response to a complaint lodged a day earlier by Iranian Foreign Minister Mohammad Javad Zarif, who told The Associated Press in an interview that new U.S. sanctions over Iran's ballistic missile testing are "illegal" and an example of an American "addiction to coercion." The penalties were imposed Sunday, a day after the U.S. and other nations lifted sanctions over Iran's nuclear program.